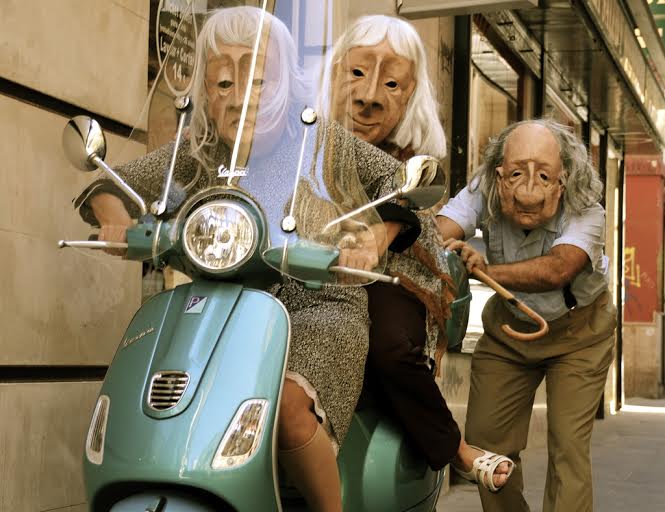 Established Spanish street theatre company Vagalume Teatro have created a touching and funny mask performance in their first exploration of this form. They establish an effective and simple premise: three elderly people meet by chance when they share the same bench. Each is suffering – one is too poor to eat, one cannot afford the medicine he needs, and the third is a protestor who dreams of changing the system. Recognising one another’s plight, they see a plan to help themselves: together they will rob a cash machine.

The characters are sharply drawn and beautifully performed. Oversized latex masks allow for detail in the crafted faces and the physical characterisation is deft and perfectly timed. Recognisable gestures, that range from yoga breathing techniques to saucy dance routines, bring these characters firmly into our world, whilst at the same time clownish touches – constant playing to the crowd, silly props like honking horn and a giant bundle of dynamite – animate and lift the comedy. But it’s the show’s themes that that are the most identifiable: the poverty of these old people is all-too plausible in this age of austerity and their resistance to it makes the material all the more touching.

The production is well crafted: a revolving set – on one side the bench, on the other the ATM – offers everything the story needs for some effective chase sequences as well as supporting some suitably bizarre costume changes as we witness the characters’ hilarious fantasies of what they’d do if the heist comes off. Fundamentally, Vagalume has created characters we root for. As you would expect from a company with three decades of street theatre behind them, the storytelling is well paced and with some nice theatrical surprises. This is a satisfying example of the ways mask theatre can reach readily and powerfully into territory conventional drama would have to work much harder to effectively pull off.