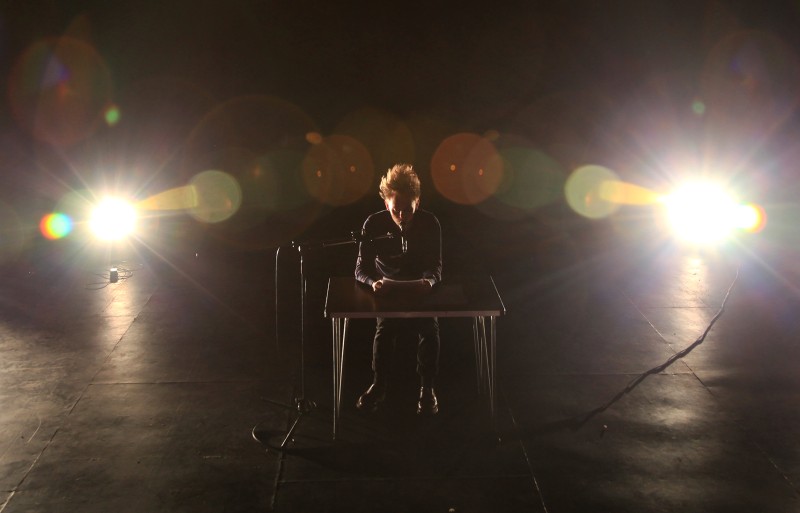 Most frequently seen throwing food around or covering himself in flour, in this first solo show by the Made in China artist we find Christopher Brett Bailey alone on stage, seated behind a desk, microphone to his lips.

In the shadows of the space behind him a range of amps and monitors can be glimpsed. The lights are focused on the shock-haired, bright-eyed, skinny-fit figure before us. He gives us a look, takes a breath and BOOM. Out comes a torrent of words, delivered with fluency and vigour, like a beat poet on speed. It is a battery of opinion across a load of subjects including the English Defence League and the Oyster Band.

Another breath and calmer, slower speech begins to unravel a story about Bailey, his beehived girlfriend, her strange family, and their road-trip adventures.

As drama, there is nothing to watch but the performer, and nothing to hear but his words. With these limited resources Chris Brett Bailey manages to connect, convince, and take the audience on a journey. The language is rich and playful; it references the literary and literal, it creates bizarre visual images, it moves outside the story to comment on Bailey performing in this play. When a man left the audience, he shouted ‘Bye! That’s one down…’ and ruffled the remaining pages of the script.

There are hilarious sketches, reminiscent of William Burrough’s ‘routines’, and at times the cadences sound like Jack Kerouac reading On the Road in that lovely, deep, slow voice. There is a musical structure at work here, with themes that are repeated like a chorus.

At the end, Bailey says ‘we pronounce this language dead,’ which perhaps justifies the rather sensationalist title, for the piece as a whole has not been terribly dark or depraved.

Some might say ‘But is it theatre? Just a bloke at a table reading from a script? Couldn’t it be put in a book for us to read, or on the radio?’ To that a resounding ‘No’ – it needs the presence, it needs the delivery, it needs the environment.

As the words die, the music begins. A violin at first and then a band, playing in darkness, building up from a drone to a rich and pounding noise. The audience is rather violently lit (a strong design by Sherry Coenen) and for a good length of time sits, listening, being taken on a journey again but this time into our own thoughts and imaginations. The lights switch focus and we glimpse the musicians George Percy, Alicia Jane Turner, Apollo, and Bailey. They leave quietly, then we leave, a bit changed.