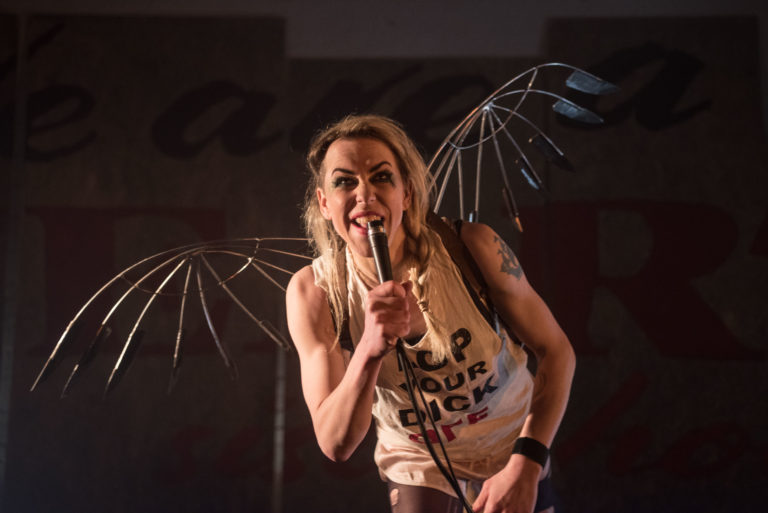 Hearty is the fifth in Frankland’s series of solos, NONE OF US IS YET A ROBOT about trans identity and her own transition experiences. It completes this body of work with a call to arms.

In the decrepit setting of Summerhall’s peeling Dissection Room, water pools the floor and a looped projection of fuzzy newsreels sears your eyes on entry. In a festival where the majority of shows speedily try to superimpose themselves on a space that’s theirs for barely an hour, the synergy of context and content here is smart and powerful. Hearty’s approach is almost site responsive, colonising walls, floor, the steep Victorian lecture bank of seats. in here, we’re in her world: a sanctuary and an outpost.

A siren wails and she plunges into the space, clutching a wooden box and bolting the doors behind her. The experience of a hostile external world is one of several looping threads woven through the piece. It sits alongside a deeply personal monologue giving insight to the lived experience of using the HRT of the title to transition; a political exhortation around the long and erased history of transsexual women (figured here as powerful and transgressive winged beings); and repeated real physical challenges that build towards a sense of ritual. It’s a complex dramaturgy that effectively articulates the innate tensions and contradictions of the experience under scrutiny: single within double, the politicisation of individual identity, the organic self-realisation delivered by synthetic chemicals. The production engages richly with its ideas, supported by presence of no less than four artists (Myriddin Pharo, who also designs, Keir Cooper, also scoring, Rachel Clerke and Ivo Macaskill) with dramaturgical input.

This could be difficult, serious theatre, and it’s certainly not material that lends itself to playfulness, but its embodied use of space and atmosphere places us in the heart (appropriately enough) of these ideas. We’re in the bunker with Emma. The water, fire, knives are all real and palpably present – this is no intellectual exercise. Pharo’s costume – fierce metal wings made of knives and a giant fleshy tail that pours over the back of Frankland’s tights – powerfully encapsulates the power, freakishness and beauty of the state of being described by the solo. There’s a story here – the dangerous uncovering of stories of silenced voices buried and rediscovered in Frankland’s bunker space – but it’s the looping, ever deepening structure that cycles though elation, fearfulness, potency, threat and horror in a viscerally embodied language, that accumulates to a deeper understanding of trans experiences and the precariousness of the contemporary world they face.