I am known for my long flowing locks – it’s part of who I am. But it wasn’t always that way. When I was a little girl, I didn’t want to be a little girl. I wanted to be a little boy. And my parents humoured me – which is interesting, because this was the late 1950s and gender divisions between boys and girls – marked by clothes, hair cuts, and toys – even more defined and restricted than they are today. It was unheard of for a little girl to wear trousers and have a short haircut – but whenever I could, I wore trousers (my red and black tartan trews were my favourite) and my hair was short.

Not just short, but short back and sides. My dad took me to his barbers – Arthurs of Gipsy Hill. I remember it all very well. The name Arthurs written in gilt on deep brown wood. The red-and-white pole outside. The glossy black-and-white photos stuck to the glass of smiling, confident men with brilliantined black hair and fierce side partings, perhaps a token American GI style crop thrown in for good measure. The black leather chairs with a wooden board placed across the chair for small boys (me!) to sit on. The big mirrors, trimmed with manly silver chrome.The Murray Mints on a tray. The thick badger-hair brushes with no handles (only women’s hairbrushes have handles). The steel combs, as dangerous a street weapon as a knife. The whirr of the razor. The smell of Brylcreem and sandalwood pomade. The bottles of Old Spice aftershave. The ‘Something for the weekend, sir?’ cabinet. Yes, English barbers in the late 1950s/early 1960s really did say that. I remember asking my dad what these little packets of three contained, but I can’t remember if he answered. A few years later, I found some Durex in my dad’s bedside locker alongside other masculine secret treasures: the black-suit bow-tie worn for works-do dinner and dances, his big square white cotton hankies with an F for Frank embroidered on (men had bigger hankies than women), and the revolver he’d never given back when he left the RAF. I was horrified. Horrified by the condoms, not the gun. Later, in the 1970s at the height of the Troubles, I remember some Sinn Fein person saying he’d be more ashamed to be caught smuggling Durex across the Irish border than guns…

The more I think about it now, the odder it all seems, this taking a small girl to the barber shop in 1959 or 1960, whenever it was (it went on for a couple of years, a fortnightly ritual). A masculine enclave forbidden to women. There were no signs up saying No Women or Girls – they weren’t needed. A woman or girl wouldn’t dream of going into a barbers then. I was there because I was with my dad, and Arthur was my dad’s friend. My parents were pretty conventional South Londoners. He was a cockney lad who worked as a car mechanic; she was an Irish immigrant who’d been a waitress in a number of London hotels, before meeting my dad out dancing at the Streatham Locarno, and becoming a ‘housewife’ – as you did. But they went along with all this. Or maybe it was just my dad who was humouring me – I was always a daddy’s girl. My mother, I think, felt a bit awkward about it. Makes it easier to comb, she told her friends as justification. Her hair is so thick, it always tangles up when it’s longer.

In those days, it was normal for very young children to be sent off to the corner shop alone. So age 6 or 7, I’d head off to buy a loaf of bread, or a packet of Players No 6 for my mum. Here you are, sonny, they’d say, and I’d grin. My granny wasn’t too keen on this looking-like-a-boy thing. She’d take me up to the tin hut stall near the station that sold hot pies and sausage rolls, and we’d sit on stools outside eating our steak-and-kidney pies wrapped in thick white paper. Is she a boy or a girl, my gran’s mates asked. She’s a girl, my gran said. She’ll grow out of it. And I’d scowl.

But actually, I did grow out of it. Secondary school age: now I wanted to be a girl. I watched Hollywood movies. I wanted Hollywood hair. Mostly, I wanted to be Veronica Lake. Age 11 or 12 I have a weird hair-do – still short at the back but a bit fluffy at the front. Kind of a 1960s precedent of the 1980s poodle look. Age 14 I grew my hair long, and parted it on the side. It was thick and blonde and a bit wavy. Like Veronica Lake. I’ve kept it long ever since. Sometimes very long. At one point it almost came down to the back of my knees. Nowadays, people see me as the epitome of the femme cis woman. Long hair, skirts, pretty shoes, lipstick. They’d probably be very surprised to hear the story of my barber shop days… 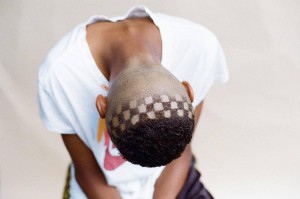 I found myself musing on all this when I went along to the press launch of Cut Festival. Cut Festival, subtitled The Art of Barbering, runs from 24 February to 5 March 2017 at Toynbee Studios (Aldgate) and various sites across the East End. It is a multi-disciplinary arts festival bringing together international artists, barbers and activists who will creatively and critically explore the history and role of the barber in communities in London and across the world. Its curator/director Jamie Lewis Hadley, and creative producer Xavier de Sousa, are interested in ways in which the history, politics and craft of barbering can be a catalyst for artistic reflection on gender, race, ritual, community and healing.

Artists and artworks flagged up that caught my fancy included Hick Duarte’s Chavosos photographs that highlight the importance of the haircut for the visual culture of baile funk (Brazil); a gif-based project by Brandon Tauszik, Tapered Throne, creating portraits of Oakland’s black barbers (USA); and playwright/performer Inua Ellams’s Barber Shop Chronicles, which is coming to the National Theatre and West Yorkshire Playhouse soon. Inua read from his play at the launch, and his memories of trips to the barber shop struck a chord. His research has taken him from London to Johannesburg, Harare, Kampala, Lagos, and Accra.

The artists/projects mentioned above are all, in their very different ways, reflecting on the traditional male world of barbering. Others often a different take on the question of hair. Open Barbers and Amy Pennington will be celebrating diversity by offering haircuts ‘free of gendered language’. Which will hopefully have more attractive results than the gender-neutral haircuts I inflicted on my three sons. (Until they eventually rebelled – two out of the three did, anyway – and insisted on going to the barber’s. But that’s a whole other story.)

Katy Baird will ‘invite beauty industry professionals to conduct a public transformation of her body in an exploration of identity construction and consumption’. Which sounds awesome but terrifying! Cary Kwork’s Plummage is ‘a series of intricate exquisite drawings exploring different black hairstyles of recent decades’. The one we saw at the launch was a beautiful ballpoint drawing. And Emma Frankland will ‘create an immersive barbering experience reflecting on the queer history of East London’ which sounds marvellous.

Out on the streets, Joshua Coombes will be offering cuts to the homeless communities of London; and New York based barber Mark Bustos, founder of Haircuts for the Homeless, will also be out and about in the East End –#Be AwesomeToSomebody

Jamie Lewis Hadley’s Blood on the Streets is a performance and exhibition exploring the history of bloodletting and barber-surgeons.

There’s more too – full details on the website. It all kicks off with Cut to the Chase on Saturday 25 February – a day of talks, discussions and performances at Toynbee Studios Theatre (from 2pm). There is also a free exhibition, The Art of Barbering, running throughout the festival at Archive Gallery, Haggerston (12–6pm). 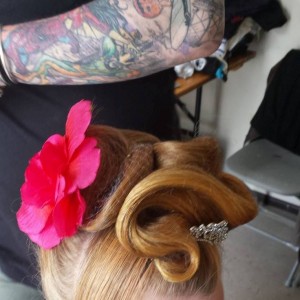 Dorothy Max Prior being coiffed by hairdresser Kris Gallagher