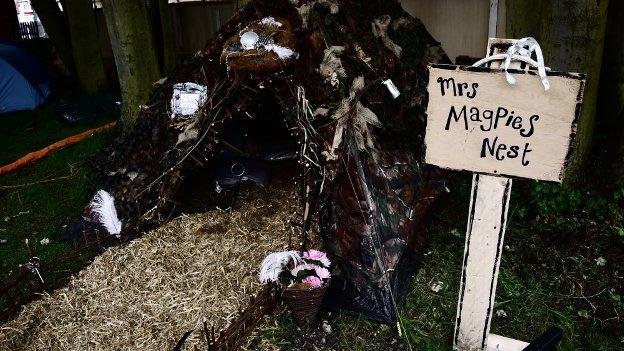 It’s a bright idea to draw together the range of work inspired by the current vogue for intimate performance into a day-long menu that audiences can skip between. Many venues have tried it, but none with quite the atmospheric verve of Laura Mugridge and Tom Frankland’s Campsite. Here audiences can choose between a selection of five characterful (literally: they have names) campervans each offering a rolling programme of performances for audiences of up to six squeezing into their kitschy interiors (but many one-on-one).

There are some sure fire hits here, with high quality, unsettling and really imaginative small-scale audience experiences such as Mamoru Iriguchi’s Mini Journey from a Man to a Woman, or Rachel Blackman and Emma Kilbey’s unsettling and joyful The Department of Unreliable Memoirs. I eavesdropped on Greg Wohead’s beautiful Just Inside my Tent (and other Safe Places), a truly intimate one-on-one coming of age journey whose gentle and richly evocative narrative brings audience and performer into genuine emotional as well as physical closeness aided by the masks of a simple wig and pair of google-eyed glasses.

Fergus Evans packs a lot into just ten minutes extracted from his full-length show my heart is hitchhiking down peachtree street. The three of us joining him in the campervan write stickers with our names and the place we think of as home, and Evans engages us all in a brief but gently perceptive conversation about how we feel about these places, whether they are where we now live or not. This is interwoven with his own softly-spoken but intensely lyrical memories of Peachtree Street in Atlanta, Georgia, its heat and haze, tarmac and transvestites, and his blunt if factually-questionable advice about living there (dealing with bears, snakes and alligators), which he carefully checks we’ve listened to and can recall. Finally, he gives us each a peach to take away. It’s rich and unhurried, and although in the full show I’m sure the links between the different registers would feel less abrupt, even in this shortened form its questions about home, memories and distance pack an emotional punch, wrapped, like the peaches, in a softly padded box.

Daniel Bye’s ‘performance lecture’ The Price of Everything – although this version for four of us in a tiny campervan is well adapted to be rather more intimate than ‘lecture’ might suggest – is spun from the notion that the third of a pint of milk he gives each of us cost him 17p, which is about what each of us in the UK contributes weekly to arts funding. But the show, even in this truncated twenty minutes, goes well beyond an argument about the arts, ranging from various ways of pricing our bodies, a bleakly logical satirical argument about NHS funding and the elderly, the price you can get for an air guitar on Ebay, and the proportion of a milk-filled Lake Wildemere we could buy if everyone in the caravan sold all their organs. Bye is an absolutely engaging presence, and the show is witty, passionate, well-constructed, and fundamentally truthful even when it’s full of lies – fun, thought-provoking and inspiring.

Other work is less fully formed and in an intimate setting feels rather less comfortable, highlighting its lapses and the amount it asks from us at this stage in its life. Ira Brans’s A Cure for Ageing may in time become a melancholic imagination of future selves but for now feels too raw for public consumption: we are taken through some difficult imagery and asked to contribute something personal to the future show which felt unearned. I wanted more back than a dark chocolate caramel.

The evening was rounded off with a mad musical rendition of the filmGhostbusters by Jonathan Monkhouse, Katy Schutte and Frankland himself as a bickering and playful troupe of actors fighting over how to perform their version of this cult classic. The result was very silly, with some genuinely funny lyrics and witty theatrical interpolations on and around Joni the camper van and a good edit of the film (which strangely left me wanting more of the original, alongside the songs). There’s lots of potential here for a cult audience experience which I can imagine working well in projected future contexts for the Campsite project as a whole.

Festival Director Emma Bettridge has described this Pulse-commissioned project (on A Younger Theatre) as a mini-Latitude and there is a genuine attempt in the Campsite’s fun form, playful atmosphere and gift-giving experience to engage audiences in a new way, but more work is needed. The process for accessing shows felt tough to navigate (an exchange of tokens and keys) and the programme really unclear. In a context where work could be stumbled upon in a more accessible way, this wouldn’t be a problem (an advantage even), but when you are asked to make choices as you come in about what you want to see it feels obscure and rather exclusive. For now, too much of what was happening here was artists watching one another’s work, and a more publicly friendly and outward-facing patter, either by the artists themselves or by others around the vans, would be a very positive development.

What a relief then to find, in the centre of town, amongst the throng of Ipswichians, all-girl live art troupe Three Step Endeavour attempting valiantly to engage with public audiences outside the town hall. Their tatty caravan providing the backdrop to a mini arena, their loud hailer, booming sound system and snazzy silver tracksuits drew attention from a range of bemused locals, and children in particular were quick to be lured into the arena for a 15 minute interactive description of their professional hopscotching skills. The company still have some serious learning to do about street arts schtick: their characters felt too thinly defined to give them enough of a mask to work through in dealing with potential audiences, which led to some rather plaintive interactions begging people to come and take part in the show. The arena itself felt a little closed off (and was perhaps the wrong way round, with the performers working in toward the enclosed audience rather than out on to the street), making it difficult for curious passers-by to drop in and out of the show. I desperately wanted the girls to put down their clipboards and have their script off pat, as constantly having to look down undermined the rhythm of their gags and limited the sense that they were really speaking to us. But it was great to see artists here connecting with audiences, people who almost certainly wouldn’t have otherwise engaged with the festival, offering them something funny and fun, and working hard to draw new people into their work.