MetaMorpho: Devil in the Detail 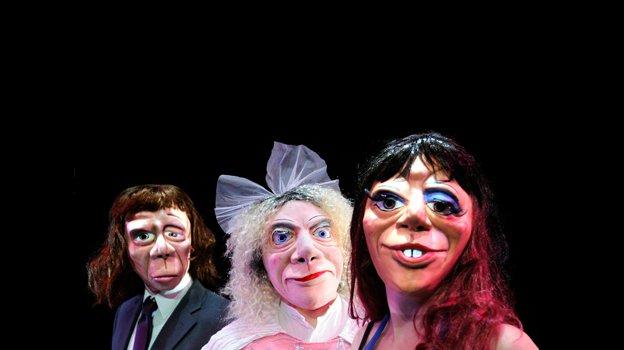 MetaMorpho is the new company formed by writer and director Toby Wilsher, the co-founder and former director of what, for many years, was England’s leading mask theatre company, Trestle. MetaMorpho’s first production, Devil in the Detail, is a full-mask farce loosely based on a Victorian one-act play, Box and Cox which is itself based on a French ‘vaudeville’, Frisette.

You can understand why they’ve chosen it: it’s a classic farce with a storyline perfect for physical theatre. A wily landlady decides to make a fast buck by renting out a room with ‘double tenantry’: to a sharp-witted foxy guy who is out during the day and sleeps by night (‘the swindling accountant’) and a rather dreamy and moonish night-watchman, who returns to what he believes to be his room to sleep during the day. The buxom landlady and her floozy daughter therefore have to race around twice a day rearranging furniture and houseplants and knick-knacks, and changing over the sheets. Of course, things go terribly wrong, resulting in a whole Brian Rix-style banging of doors, fumbling under beds, mixing-up of drinks, and hiding in cupboards. Add into the mix a snake under the bed, a yapping dog, a family of mice, a wine bottle filled with poison, and a drug baroness looking for the accountant’s hidden loot, and you have a merry romp that (despite a few contemporary details) could easily have been created at any point over the past half-century.

This isn’t a criticism: I am not one for innovation for its own sake, and MetaMorpho are masters of the art of full-mask physical theatre. It’s a well-written piece, performed with great skill by a cast of five, which includes Trestle stalwarts Alan Riley, Sarah Thom, and James Greaves, plus puppet dog and snake. It’s a word-free piece, the action driven by the physical performance and by a feisty recorded soundtrack of Balkan beats, Marvin Gaye classics, and jazz piano (much of which is heard as if from the bedroom’s transistor radio, and which becomes symptomatic of the battle for the space).

The mask work is of course impeccable, and the puppetry is good too: the drugging of the puppet dog a lovely moment, as is the whole fandango around the mice in the vents, caught and fed to the snake…

There are a few things I feel a little uncomfortable with: I don’t understand why the white actors are (masked) playing characters of other ethnicities that seem a little stereotypical. We’ve moved on from actors blacking up to play Othello, so not sure what the justification was here in the mask character of a black drugs baroness? It seemed a little odd.

That aside, good to see Toby Wilsher up and running again in the UK after a long sojourn elsewhere. Devil in the Detail is perhaps not a piece that would be to everyone’s taste – it could be said that it is firmly within a mould established by Trestle rather than breaking new ground – but within the framework that it is choosing to work, it is a good, solid piece; an enjoyable hour or so’s entertainment. It won’t change the world, but I don’t think it aims to.