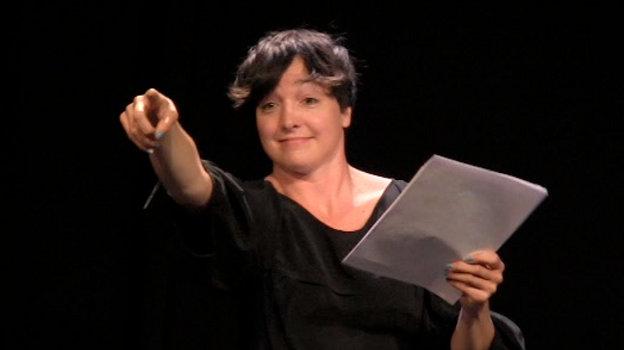 Watching rabbits… The title comes from the author’s uncle, who devises an experiment for his rabbits. The one that leaps up a ladder to nab the carrot is daubed in red, while the other white rabbits are doused with cold water. The red rabbit is attacked by its companions, even without the water, carrot or memory.

This becomes the starting-point for a theatrical experience that makes the audience into rabbits and metaphorical guinea pigs. Given numbers, people come forward to play parts that explore trust, cunning, human nature. The format creates some unusual moments, which will never be repeated and are made by amateurs. It is oddly moving when they make perfect sense.

A different actor gives a cold reading of the script each day. After a brief explanation from the producer, he or she is handed an envelope. Today, Debbie Pearson, the 28 year-old co-director of Forest Fringe, gave a steady, sustained performance, with grace in the face of the unexpected.

Partly pulling the strings is the Iranian writer Nassim Soleimanpour. His script considers ‘me’ the actor, ‘me’ the writer, and ‘you’ the audience, playing with location, time and space. Although its references are not very culturally specific, the distance and possibility of disappearance add poignancy. It’s tempting to feel this piece gives a glimpse of Iran, while crossing borders.

The underlying game is one of murder and suicide. In a twisted magic trick, poison is added to one of two glasses, although after closing your eyes and other audience intervention, it’s hard to remember which. The actor dutifully downs one and lies prone at the end, but the text has pre-empted our distrust of illusion. We are reminded of the unknowns (such as a possible death wish of the actor).

White Rabbit, Red Rabbit is presented by Volcano Theatre (Canada), Remarkable Arts and Wolfgang Hoffmann, a leading light in physical theatre who was also co-producer of the former venue Aurora Nova. It is both formally innovative and fundamentally scripted, interrogating the control mechanisms inherent in a script and involving the audience in concrete ways. The brown envelope and pieces of paper become an object that a participant can take away as a parting gift. We are also given an email address and asked to send photos and notes to the writer.

White Rabbit, Red Rabbit is certainly thought-provoking. The slightly scratch set-up may mean some underwhelming moments but also heightened awareness and connection when it works. The suicide drama is contrived but relevant. We are told that there are seventeen ways of committing suicide – the eighteenth way is life.