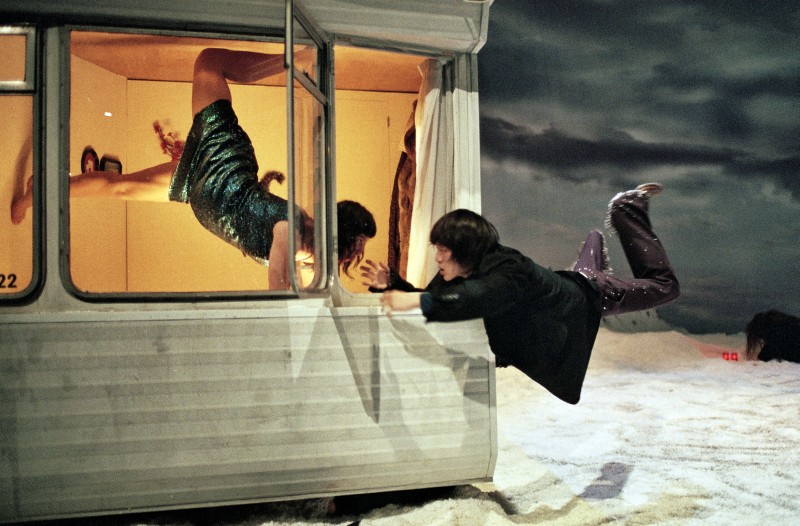 We’re washed about by the sound of a whistling, chilling wind. Darkness lifts to reveal a snowy landscape and a couple of opposing rickety trailer homes gazed over by a huge sky. A hunched female figure in heels steps onto the vast white and hesitantly halts. Blue plastic bags breeze across her path like polythene tumbleweeds. Acrid lights snap on in the trailers. It’s cold. It’s dusk or dawn, it’s certainly desolate. A baby cries, the tiny bundled body is cradled in snow and tenderly shoved out of sight under the trailer. The crying diminishes. It’s odd and I know odd. This is unsettlingly, odd. Teamed with an equally desolate and eerie soundscape, there follows an extraordinary bending-over-backwards duet.

Founded by Gabriella Carrizo and Franck Chartier, Belgium-based Peeping Tom’s style is to work with a hyperrealistic aesthetic allied to a realistic set and themes of isolation. Peeping Tom’s 32 Rue Vandenbranden is so filmic, crisply cinematic… it’s a kind of hybrid of David Lynch and Korean horror. One of the inspiration sources for this work was Shohei Imamura’s The Ballad of Narayama.

Gazing at forlorn and frightened characters looking out from their thin windows, we catch and snatch glimpses of their contained lives that spill out onto the no-longer-pristine snow. A large walrus-like lady slips and takes a tumble on the snow, and gets suckled one breast at a time by two snow-frolicking young men. She goes off and returns with a shotgun and an extraordinary mezzosoprano voice. Someone taking a pratfall onto their face can be slapstick-funny, but it’s perverse to laugh when that body is heavily pregnant. It’s uncomfortable. There then follows more extraordinary solos, duets, dialogues, and ensemble physical exchanges of which I’ve not seen the like. Warping, waxing, melting movement. Fluid plasticine bodies and ghoul-faced dances.

I’ve seen a lot of things and I’ve never seen anything like Peeping Tom’s disturbingly sexually charged action of dysfunctional neighbours living in homes that are scant shelter against the cold. Nor do they seem to be wearing anywhere near enough clothes, which is only another reason I get goosebumps! Their isolation leads to an unconscious world of nightmares, fears, and desires. Set in white, we view the dark side of a community, where borders between what happens in reality and what they believe happens become blurred. They are both lost and trapped. A community of remote lives lived alongside each other, which through enforced proximity sadistically or tenderly collide, tarnish, and imprint upon the snow, grubbying it up with a wrangling physicality of suffering and celebration and anguish. Yet ultimately their hopes and dreams are bleached out by the final taboo of their shared loneliness. It chilled me.