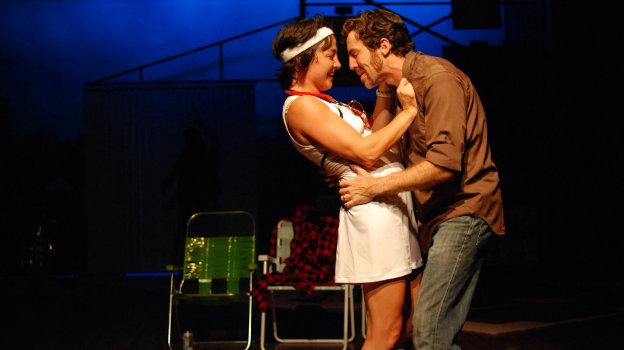 Viva Las Vegas! The fastest growing American city at the turn of the millennium, now at the epicentre of the US financial collapse and housing crisis… But never mind that, the show must go on! Cue Sinatra’s ‘Fly Me to the Moon’. Cue Elvis singing ‘Suspicious Minds’ in a white jumpsuit. Cue showgirl dancers in Red Indian headdresses. Cue lady crooners in leopardskin. Cue a guitar solo. A drum solo. Palm trees with glitter leaves. And neon. And devil horns. And let’s crack open another beer, why don’t we? Let’s get lucky!

Young Americans The TEAM (the acronym stands for ‘theatre of the American moment’) made their mark at the Edinburgh Fringe in 2008 with Architecting, a Total Theatre Award winning show that deconstructed Gone With the Wind, and meshed the response to Hurricane Katrina in with a reflection on racial conflict, social housing deficits, and capitalist enterprise in New Orleans. Now the TEAM return with another scorching investigation of American history and cultural mores – and what they call ‘the character of American capitalism’ – in a mesmeric music-theatre homage to the city that is the heart of America’s entertainment industry.

Using their trademark method of ensemble playwriting, built around extensive research (a month in Vegas) and ‘physical and verbal improvisation, battering, and argument’ the company have dug and delved into the many layers of Vegas life, and found a musical frame to deliver that story in a way that is beautifully appropriate and cleverly staged: no make-do pastiches here; we get the best across-the musical-board musicians, and a female jazz-rock-cabaret singer and pianist with the voice of an angel and a lovely stage presence – Miss Atomic (Heather Christian), a beauty pageant winner whose title is inspired by the 1950s nuclear tests held just 60 miles north of the city, and a kind of Puck-like character who is a catalyst to the action.

Mission Drift uses as its throughline the allegorical story of two WASPish youngsters, Catalina and Joris Rapalje, who, aged just 14, set off ‘in the Tigernot the Mayflower’ from Amsterdam to New Amsterdam (or New York as it is now known), then journey westwards till they settle in what is now called Las Vegas, a desert ‘meadow’ sitting between California and Salt Lake. Their 14-year-old selves grow up and come of age, but in mythic rather than real time – as the centuries roll by (and they take on slightly different names and forms – Cat, Jack, Lina, Josh), we see them reach maturity, but they remain essentially young and full of the bravado of the archetypal young pioneers who built – and continue to build – America. Here, they are the entrepreneurs who, once they reach what will become Vegas, set up the Little House in the Woods bar (‘What do people here need? They need a beer!’), which eventually, in present day time, grows into a massive entertainment complex and casino.

Set as foils to their story are Joan, a young black woman who has just lost her job at the casino, and a seemingly itinerant North American Indian man called Chris. The ‘house’ also features as a character – ‘I am the house, as in the house in the woods, as in the house always wins!’ – and this personification of places is picked up on by Chris when describing the man from the Vegas Water Authority who bought out his property: ‘He talked about Las Vegas like he was a person with rights… ’

What I love so dearly about the TEAM’s work is the complex relationship with America explored and displayed. Here is justifiable anger and criticism – Chris relates stories of white traders who, when trade isn’t forthcoming, just steal. And there is plenty about the greed and exploitation of the casino owners and the city authorities. But there is also a love of Americana and a refusal to opt-out expressed: when Chris tries to persuade Joan to join him away in Montana, away from all this, off the grid, she replies, ‘I like the grid!’, and later in the piece we get a beautiful eulogy to neon lighting delivered by Joan from a neon boneyard: ‘Leave the signs alone, they’re special… See there: the Genie with the Teapot, the Moulin Rouge!’ There is also ambivalence, and plenty of it: our teenage hero and heroine are, at one and the same time, wonderful examples of strength and self-reliance and the put-up-with-hardships pioneering spirit that made America, the ‘acceptable face of capitalism’; but we also see, through the eyes of Joan and Chris, the negative consequences of many of the white entrepreneurs’ actions.

Yet it is never cut and dried, there is always a question, and there is always love; it is all told in a spirit of love, and with a belief in redemption. ‘If you believe in God, you believe in Vegas!’ is broadcast to us as an ironic statement, yet the lingering thought remains that the TEAM do, in some very deep and real way, believe this to be true.

Mission Drift is a beautiful, complex, multi-layered piece of theatre that manages to appeal to head, heart and soul in equal measure. Fantastic performances from all the cast and musicians, displaying a combination of extraordinarily high levels of musical and acting skills. And living proof that contemporary collaborative ‘playwriting’, though often a complex and tiring process of negotiation, can reap magnificent rewards in the right hands. Another fantastic TEAM effort!