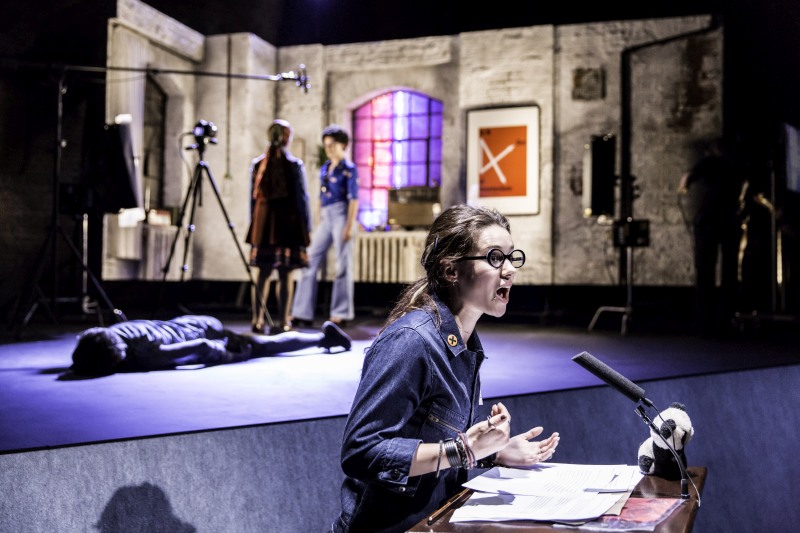 Adler & Gibb tells a story about art, love and appropriation. On the way it touches on the nature of acting, the unvoiced demands of the audience, the murky territory where art meets life. This exploration occurs largely through words, in dialogue between characters and occasionally with us the audience. It is a play, it’s on the main stage at the Royal Court and boasts an impressive cast list, yet it warrants critical coverage here in Total Theatre because it is also determinedly experimental. ‘I don’t want to have to work this hard’, complains one man behind me during the interval, ‘I come here to be entertained!’ Language may be the primary medium of Adler & Gibb, but it’s through form that the fundamental meaning is expressed.

Through the detailed story of the life and legacy of a conceptual artist Janet Adler, here framed as an increasingly desperate student thesis presentation, Crouch with his co-directors and long-time collaborators Karl James and Andy Smith, is really interested in excavating questions around our relationship with artists and their work. This academic bookend, although a recognisable devised theatre trope that adds a density of expression that can feel alienating, is sound dramaturgy – the first instance of the wresting of Adler’s art into frames of reference irrelevant to the actual work. Even the conceptual art world Adler had courted finds itself unable to digest her increasingly bold provocations of life as art (offering a real puppy as a response to one commission).The meat of the story concerns an unauthorised biopic being made about her life, counterpointed by the lead actress’s search for realism through abrasive Stanislavkian exercises set by her svengali-like coach. He commands her to search for truth and work with what is real: this is the height of dramatic successfulness, is it not? The audience of course is fully inscripted within this provocation. We are invited to consider our own rapacious interest in the real lives behind celebrity images (if this had been a play about a real celebrity, would it have made a bigger media splash?) and perhaps too our expectations about naturalism as the most emotionally satisfying form of representation on stage, feeding us the inner lives of its characters.

The formal experimentation focuses in the first half on the nature of what is ‘real’ on stage. Actress Louisa and her coach Sam present their scenes in studied two-dimensionality: their voices are full of inflection but their bodies rigid, front facing and still. The disconnect this creates foregrounds the artificiality of their endeavour on the biopic and also chips away at the mechanisms of this show here and now. In contrast we are presented with two children, who play and hang out on stage in the background, stepping forward to play the part of animals that figure in the story and work as stage managers, handing props and creating atmosphere with smoke machines. So far, so Brechtian. We buy this intellectual conceit because it places us not the ‘right’ side: we’re with Adler, we understand that all representation is misrepresentation: we don’t want to see her work appropriated against her clearly articulated wishes. The first half sets these ideas into play with studied rigour, intercut with the serious academic postures that the student (a younger version of Louisa, it becomes clear) strikes, but as a result its theatrical languages, for all the fucking and bleeding in the action, feel a little dry.

The second half shifts gear though – suddenly we’re in the world, in Adler’s house, in her grave even. The characters are performing in themselves and in the space and the separate reality of the children and animals has gone. The story of an obsession takes centre stage. Following the advice of his own on-stage coach, Crouch keeps on raising the stakes to almost preposterous levels but the play manages to just about keep its wheels on because of the emotional centre emanating from the bereaved lover, Gibb. The notion of the reality of love as life changing, of a life as art offered to just one audience Other, is resonant. But as we are drawn into the emotional heart of the story, where does this leave the intellectual frame? Perhaps the intention is for us to recognise that the show, in giving us what we want, what appeals to us as an audience, make us complicit in the fate of Adler’s work and her story?

Yet, as Brecht discovered, story’s seductive power has the ability to draw us in despite theatrical attempts to confound it. For all the clear and pleasing formal frames of the closing scenes (through cameras, screens, acting theories and film production), what lingers are the emotional realities portrayed: the sense of neediness that drives the desperate reach to frame your identity through art, and also the transformative, irreducible power of profound connection and love. I’m not sure this takeaway isn’t at odds with the underlying ambitions of the play. All its underlying arguments propose how true interiority – love, death, instinct – can never be available to us (and that we shouldn’t want them to be), yet its moments of humanity are deeply compelling. There’s more life in this art than meets the eye.