Voices is an occasional feature series that gives the stage to someone making a mark in the ‘total theatre’ world. Here, we feature 1927’s Jo Crowley, who tells us about her role as the company’s producer

I never set out to be a producer. When I started working, producers tended only to exist in the commercial sector and back then that really wasn’t something that interested me. All I knew is that I wanted to find a way to work with forward thinking artists, companies and theatre-makers who were trying to make original theatre.

My producing journey properly started at BAC in the days when BAC had only one development producer and the tiniest of teams. I was BAC’s administrator, and found myself submerged in organising, negotiating, contracting and eventually producing. After two years, I moved from BAC to Your Imagination, a creative producing and arts management company that existed between 2001-2005.

I had the pleasure of learning from, collaborating with, and producing a brilliant and eclectic stable of artists including Cartoon de Salvo, Guy Dartnell, The Gogmagogs, The Table Show, Ridiculusmus, Tom Morris and Guy Dartnell – and also running artist development, touring and mentoring initiatives such as This Way Up, which helped support the development of some fantastic then emerging artists and companies such as Gecko, Sound & Fury, Filter and Blind Summit.

Your Imagination was a totally independent endeavour, but after five years as one of the first creative producing companies, and in a context where the role of producers outside of commercial contexts was only beginning to be understood, it was a challenge make it work without resource and as we didn’t want to compromise the work of the artists we were collaborating with we decided to close the company. Since then I have produced one-off projects and tours by some exceptional artists and companies. But the thing I’m really interested in is working across a body of work long-term with artists and companies. So, over the last 10 years I’ve mainly been preoccupied collaborating as producer for 1927 and Kazuko Hohki, and Ridiculusmus (until 2012). 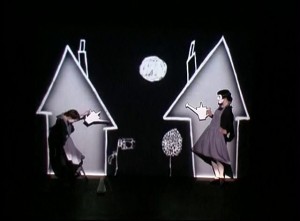 I started tentatively collaborating with 1927 following their Edinburgh Fringe debut in summer 2007. They’d created a beautiful debut show, Between the Devil and the Deep Blue Sea, that had been a knock-out, sell-out, multi-award winning success. They were being approached by producers from all over the UK and overseas who wanted to work with them.  Through an introduction from Shelley Hastings at BAC, I met with Suzanne Andrade (1927’s co-artistic director) and Esme Appleton (associate artist) to share some advice about how they could work with a producer, what they should look for, and the opportunities they had ahead of them. In that first meeting, there was never an intention that I would begin collaborating with them as a producer. But as in all good relationships, you strike a chord with someone, you share a sense of purpose, belief and vision and one thing leads to another.  So within a matter of weeks we had begun tentatively courting and three months later we had a year of UK and international touring lined up…

When I started working with 1927, it was a tiny company with incredible creativity, focus and determination but no resource or infrastructure whatsoever – the company didn’t even have a bank account and few partnerships outside of a handful of London venues. The journey of the last eight years has been an immense one – we’ve remained small and lightweight, but have created three theatre original productions through two-year-long creative processes (Between the Devil and the Deep Blue Sea, The Animals and Children Took to the Streets, and Golem); we’ve made large-scale operas, music animation collaborations and short films; and worked with major UK and international partners, presenting our work in 125 venues and festivals in 36 countries across 5 continents, reaching hundreds of thousands of audiences. It’s been a big journey, but one that feels like it’s only just beginning… 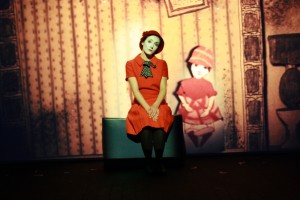 What does a producer do? Every single producer would come back with a different response! It’s so variable and dependent upon the nature of the artists and creatives involved; the circumstances, context; the resource, and even personality. 1927 isn’t a highly-resourced company, we have an intensive programme, but we operate a very lightweight, low infrastructure and efficient engine to fuel the company. For me this means that my role as a producer sees me doing pretty much everything that isn’t the actual creation of the shows. If you think of an arts building that has an executive director, a general manager, a fundraiser, an accountant, a book-keeper, a finance director, an administrator, a marketing and press team, an artist development team, a programming and curating team – and then you think of the large-scale companies with executive producers, production co-coordinators, production managers, tour bookers and logistics coordinators… Take all of those roles and all of their respective responsibilities and duties, roll it into one and add in the responsibility of strategically mapping creative and production journeys and juggling the responsibility of ensuring everyone involved can sustain a livelihood, pay their rent, and eat each month and you begin to scratch at the surface of the eclectic range and diversity of what it is a producer in an independent company might do, and what I do as 1927’s producer…

The Young Vic were one of our original co-producers on Golem. We’re an associate company and based at the Young Vic. The Young Vic have recently successfully transferred a number of other shows to the West End and were thus incredibly well positioned and informed to provide support, guidance, advice and important championing throughout the recent transfer to the Trafalgar Studios (April–May 2015).  It’s been a great partnership and personally, I think it’s a brilliant example of how NPOs can work with non NPOs and the independent sector in new ways to collectively progress the landscape of theatre across scales and sectors. 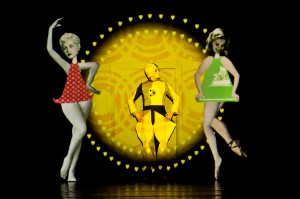 It’s really important for us to reach a broad demographic of audience – hence our West End transfer. Tapping into a mainstream audience is an essential part of this.  We wanted to demonstrate that there is an appetite within mainstream audiences for high quality, contemporary, genre crossing and original work. We wanted to see if original, artist-led work without star casts could appeal to mainstream audiences, and if so, to be part of a body of effort to open a pathway for more artist-led independent work to find homes in the commercial sector. This is essential for growing a wider audience and public appreciation, and understanding of the role the arts play in people’s lives. ATG were interested in hosting us, and the Trafalgar Studios had a slot available. As a West End venue Trafalgar has a reputation as one of the more adventurously and progressively programmed spaces.

Vitally, Trafalgar Studios has practically 100% perfect sightlines – something that is incredibly rare in West End theatres, but which is essential for our shows. Inside, it also feels more like a cinema than a theatre – which chimes with our work and vision. The team there and at ATG were really supportive, so it felt like a perfect fit.

Our work takes a long time to make and rehearsal processes take many, many months to achieve a fully synchronised fusion of the animated and live – it’s an expensive and highly technical process that requires strong partnerships. The other co-producing partners on the creation of the show were our international co-producers the Salzburg Festival and Theatre de la Ville Paris who provided important financial contributions towards making the show, development support and guaranteed international seasons which are vital for the long term of life of the show. We also had a number of UK development partners provided pivotal support and space for workshopping and production and opportunities to share the show with local audiences as it evolved from work in progress through until preview stages.  These partners were The Tolman Centre in Cornwall, Stratford Circus, The Old Market and Harrogate Theatre. 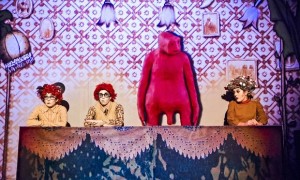 There is practically no production infrastructure  in West End theatres – there’s power and there’s a stage and there’s an auditorium, but everything else needs bringing in and you as the producer have to bring it and pay for it – even the stage floor!  On the one hand it feels like a very different world, and yet at the same time if you’re a company like 1927 and have toured extensively, it’s just another venue and just another set of challenges which can be straight forwardly managed. What I will say, is that having a season in the West End has really brought it home to me what an extraordinary thing the UK subsidised and the independent sectors are – they are the creative testing grounds for the future of theatre – but also they are an extraordinary resource without which the ecosystem of British theatre would crumble.

The costs of mounting a West End season and the cost of hiring are significantly greater than a season in a subsidised or independent space and thus the weight of risk carried is incredibly greater.  The usual way around this is to collaborate with a commercial partner so that the independent or subsidised partner is protected. But 1927 has never been adverse to a challenge or to embracing risk – creatively or organisationally – and so we took on the challenge on of mounting our transfer season without a commercial partner.

We’ve been able to do this with the fantastic support and guidance of the Young Vic and with the cushion of social investment finance from a funder to support the capitalisation (i.e. get the show to opening!) costs. We simply could not have delivered the season without this. It’s refreshing that this new model of social investment in commercial productions is emerging supported by visionary trusts and foundations – it means that independent artists, companies, ensembles and venues are beginning to dip their toes into commercial waters – growing the range and diversity of work on offer for audiences in the commercial sector, but also if financially successful, vitally benefiting those non-commercial entities and providing a new and much needed revenue stream as public funding is reduced or simply not available to many. The only wish I have is that costs associated with mounting West End seasons were more manageable in order to ensure we could make the work accessible and affordable for different generations or for those on lower income through lower ticket prices – but maybe that’s one for next time…

What next? It’s non-stop for 1927 from now on! Golem’s next season is at Theatre de la Ville in Paris (June 2015), then it’s back on the road touring to Russia, across China, Spain and Switzerland and to HOME in Manchester this year – then off to Australia, New Zealand, the US, Europe and hopefully a UK tour next year…

At the same time, we’ll also be making two productions for premiere in 2017 – a new opera to be created with the composer Richard Ayres, and a Ravel and Stravinsky double bill that will see us dip our toes into new performance territories including dance and circus…

1927’s Golem was reviewed by Total Theatre at its premiere at Young Vic, December 2014.

For further information on the company, see www.19-27.co.uk