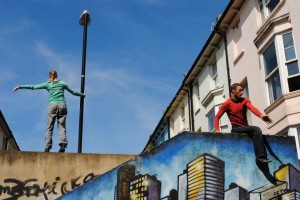 I’m sure you know, but in case you don’t: the Brighton Festivals (that is, the Festival, the Fringe, House, the Open Houses, and various stray programmes that get tacked on, such as the Caravan showcase) amount to the biggest arts festival in England, second only in the UK to the Edinburgh extravaganza that takes Edinburgh by storm (or by hostage, depending on your viewpoint).

People sometimes ask me for advice about putting on a show in Brighton in May, and in reply I suggest doing a show in April or June: May is so completely overloaded that it can (mirroring Edinburgh) be hard to get an audience, unless you have the backing of the main festival or the support of a good fringe venue. Opting out of the party altogether are The Basement arts centre, for years a Brighton Festival hub, who have decided this year to focus on their March-April Sick Festival, which is establishing itself as a regular Spring date on the arts calendar.

But of course there are many other venues on board for the Brighton Festival: old regulars like the Theatre Royal and newer hot-spots such as The Old Market (TOM) hosting Festival shows. In the case of TOM, hosting both main festival and fringe shows (such as The New Ten Commandments by the enterprising artist and filmmaker Simon Wilkinson) side-by-side.

The Dome complex is being used (as it should be) fully, with shows in the opening weekend including the Tim Crouch / A Smith collab what happens to the hope at the end of the evening, reviewed here by Beccy Smith (who gets the TT gold star for first review of the fest, posted less than 24 hours after seeing the show), this seen in the Dome Studio (Pavilion Theatre as was); guest artist director Hofesh Shechter’s bombastic Sun in the main space (this also reviewed by Beccy, seen by us both on Sunday 4 May); and the epic and awesome Russian piece Opus 7, taking up every inch of the Corn Exchange with cardboard, paint, a giant puppet and a herd of beaten metal pianos. I’ll be tackling that one. (‘Rather you than me’ said Beccy we left after the two-and-a-half hour marathon).

Elsewhere, the Total Theatre Award-winning Bonanza opened at the Sallis Benney Theatre, University of Brighton. It’s a multi-screen theatre/installation/film/time-based art piece (hard to define the form) about a town in Colorada, made by a Belgian company called Berlin. Yep, confusing I know. It is part of their ongoing Holocene project, focusing on different geographic locations. Such a relief to see this show again, a year later, outside of the Edinburgh bubble, and to think ‘yep, that’s an award winning show…’ It was a contentious winner, I can now reveal – opening up a heated debate on what we can consider to be ‘theatre’. More on that another time! The UK premiere of the company’s new piece, Perhaps All the Dragons, is at the Brighton Fest 21–24 May. I’ll be interviewing the company for a special feature on their work…

Also seen this first weekend: Eric Kaiel’s Murikamification, a beautiful promenade piece using dance and parkour that takes us on a journey through the backstreets of the North Laine area of Brighton. It’s a piece that’s been shown in cities across the world, and is justifiably well received wherever it goes. That too will be reviewed soon. (Gosh, so much writing to do…)

A feature of the Brighton Festival is a significant amount of free-to-audience work – either outdoors or in. Like most arty residents I sorely miss Streets of Brighton, but those days are gone, and we have to take what morsels we are given. Which are mostly given to us by Without Walls, who this year are at least supporting some people with a bit of a track record in making outdoor / off-stage work, including Metro Boulot Dodo (premiering Safe House in Hove Park on 17 May); Frantic, the new work by circus-theatre company Acrojou, (seafront, 10 May); and Tangled Feet’s One Million, billed as ‘a Brighton Festival exclusive’, although originally commissioned by Greenwich and Docklands Festival. No, I don’t understand either… Anyway, that’s at Black Rock on 24–25 May. Outdoor arts wild card is The Legend of Hamba by British–African company Tiata Fahodzi  at Pavilion Gardens, 11 May.

Indoors, free to audience, is William Forsythe’s Nowhere and Everywhere At the Same Time No.2. It’s a delightful piece – a choreographic exploration in which an enormous empty space (the Old Municipal Market) is hung with pendulums swinging in timed sequences, the audience invited to walk/run/play throughout the sea of hanging wires. The audience members thus become the dancers in the piece, either walking in purposeful patterns, or skipping like spring lambs to avoid collisions with the pendulums; art–savvy adults and innocent children enjoying the game with equal delight. Like much of the best art, it operates on many levels simultaneously – a real success.

Also indoors, also free, is Zimoun’s Sound in Motion, set in the University of Brighton Gallery. The exhibition comprises two large pieces, one a set of cardboard boxes fitted with DC-motors powering little cotton balls; the other a great wall-length ‘loom’ of motor-powered wires clattering away in almost-perpetual motion. There is also a video of other works – and although I usually dislike videos of absent works not included in exhibitions (it often feels like a poor excuse for not having more of the actual work), this is a particularly well-made one, which I enjoyed immensely. Swiss artist artist Zimoun conforms to national stereotype with his obsession with rhythmical precision – except instead of cuckoo clocks, we have a wonderful array of everyday materials (cardboard, wire, cork, metal springs, nylon filaments) used to create a symphony of mechanised sound and movement. Magical!

The Brighton Festival has a formidable reputation, sometimes deserved, and its shows are often sold out well in advance. Meanwhile, out there in the parallel world of the Brighton Fringe, it’s a dog-eats-dog consumer’s market, and audiences are spoilt for choice with more shows on than anyone is ever going to get to see. So, in an echo of the Edinburgh Fringe, which is also an uncurated free-for-all, Brighton Fringe artists need a hard-core fan-base and/or nifty way with leafleting and social media to get a crowd. I’m putting on a series of events (Ragroof Tea Dances) at the Spiegeltent so know what it’s like on the other side of the fence…

Often, again like Edinburgh Fringe, the only way to make sense of such a mountain of shows and events is to head for the venues you know and trust. The Spiegeltent of course have an envious reputation as the cabaret, physical comedy and vaudeville hub for any festival – Brighton Spiegeltent this year have a mixed bag that in the opening weekend included not only The Ragroof Players but also Copperdollar’s The Back of Beyond and Lucy Hopkins’ Le Foulard (both reviewed, by Beccy Smith and Lisa Wolfe respectively). Coming highlights include Spiegeltent house show Lost in Transit, Bernadette Russells’ 366 Days of Kindness, Casus’ Knee Deep (an extraordinary piece of circus, shortlisted for a Total Theatre Award) plus their new show Jerk, TT favourites The Tiger Lillies, the inimitable Ida Barr, and the dementedly funny Slightly Fat Features.

Over at The Warren, a pop-up venue behind a church with the sort of outdoor bar and astroturf entrance that screams ‘Edinburgh Fringe’, there’s an eclectic programme that encompasses everything in the way of fringe theatre – new writing, physical theatre, mask, puppetry, music, cabaret etc. I went along to see Feral Theatre’s Invisible Giant, a puppet-theatre piece with a conscience, aimed at young audiences (review to come).  A flag-up here too for the Marlborough Theatre (encompassing Pink Fringe programme) who are hosting Brian Lobel, Rosana Cade, and Sleeping Trees amongst others; and for the now sadly venue-less Nightingale Theatre’s Host, a five minute one-to-one pass-the baton performance instigated by performer/playwright Tim Crouch, and taking place in two of the mock-Victorian bathing machines last seen in the Nightingale’s Dip Your Toe commissions.

I passed both machines numerous times over the weekend, and hope that sometime over the coming month I can find five minutes to get in there…