The Edinburgh Festival Fringe 2016 is fast approaching, and the very first thing to say is that the Total Theatre Awards are happening once again, hurrah!

Established in 1997, the Awards have blazed a trail of recognition for independent artists and companies creating innovative, artist-led theatre and performance. If you have a show in the Fringe you’d like the TT team to consider, please fill in an application form (downloadable from the Awards section of this website). To note here also that as the Awards process progresses, there will be a list of nominees announced in all categories, which will be posted here – a handy quick guide to what’s been seen and liked the most in the first 10 days of the Fringe by our fabulous team of assessors. And of course there will be reviews, and more reviews, posted daily, so keep an eye on the Reviews section of this website, and use the search option if you can’t immediately find a review of the show you’re interested in to see if we have seen it.

Many people – online, on social media, in person, wherever – ask for my advice on what to see. An almost impossible question to answer as tastes vary and one woman’s fabulous show is another’s ’Well, I’ll never get that hour of my life back’.  But there is hope! We can at least identify the shows that are by companies and artists that Total Theatre knows and loves; shows that we’ve seen elsewhere round the country pre-Edinburgh; and shows that tick the boxes for the sort of work Total Theatre (Magazine and Awards) tries to seek out and support. This includes our traditional territories of physical and visual theatre, mime and clown, dance-theatre, circus-theatre, puppetry and object theatre; and the sort of new territory we’ve embraced in recent years – artist-led work that is innovative in its content and/or experimental in form, or is an interesting new hybrid blend of genres.

So for anyone working their way through the great big telephone directory that is the Ed Fringe ‘brochure’, and losing the will to live, here’s the Total Theatre editor’s round-up of what’s on offer this year. Get yourself a cuppa (or a G&T) and settle down, there’s a lot of goodies to flag up.

Let’s start with my first port of call – Total Theatre’s ‘home’ if you like, the Dance, Physical Theatre and Circus section of the brochure. This section (and the Cabaret listings) is the subject of this article – there will be another one on the shows in the Theatre section coming soon.

There are some big names and heavy hitters in there this year. Thrice winners of a Total Theatre Award, Derevo, return with one of their most applauded shows, Once, at the Assembly George Square Theatre. Many years have gone by since I first saw this show, but I was delighted to learn that this version of the show will feature the company’s three founder members, Anton Adasinsky, Tanya Khabarova, and Elena Yarovaya reunited on stage after many years. It is a wonderful piece of physical theatre work so do give it a go – this show is a beauty. Company Baccala’s Pss Pss (Assembly Roxy) is also not a new show – it has played both the Edinburgh Fringe and the London International Mime Festival in previous years – but if you haven’t yet seen it, go – a beautiful circus and clown two-hander. 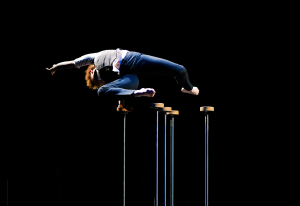 Circa, perhaps the world’s best contemporary circus company, are back again with a re-worked version of Closer, which premiered last year. It has since toured extensively (including a London run) and is now back at the Underbelly George Square. I hope Casus won’t be offended by me calling them a Circa off-shoot – but let’s face it, almost everyone in Australia who makes circus is! Following success in Edinburgh (and elsewhere) with Awards-nominated show Knee Deep, they have separated from their co-founder/performer Emma Sarjeant, and bring new show Driftwood to the Assembly George Square Gardens. Emma, meanwhile, can be found at Assembly Checkpoint with her solo show, Grace. I saw this in an earlier version, whilst she was still a part of Casus (it was originally called Jerk) and was blown away. I’m told, by director John Britton,  that the show has been substantially developed, and is even stronger now.  For more on all these Assembly shows see www.assemblyfestival.com

Also related to Circa and Casus: Company Here and Now present Perhaps Hope, a two-person piece at Circus Hub, inviting us into ‘a brave new world of hope beyond devastation’. Anything by anyone with any connections to either Circa or Casus can be relied upon to be making something using top-notch contemporary circus skills…

More circus, this time UK based: The wonderful Ockham’s Razor bring their London International Mime Festival hit Tipping Point to C Venues Scala (Edinburgh veterans will know this venue better as St Stephen’s Church), which yours truly feels is their best show yet; Joli Vyann (another LIMF fave) will be at Circus Hub on the Meadows with Imbalance; and the fabulous Gandini Juggling – the jugglers that even people who don’t like juggling like – are back in Edinburgh, although only until the 14th, with Water on Mars, a new three—hander which will be showing at Assembly Roxy. 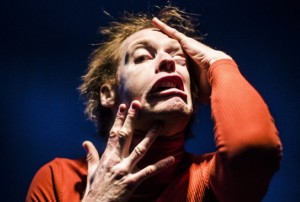 Another sure-fire circus winner is Thomas Monkton’s The Pianist (Assembly Roxy)  presented by Aurora Nova and Circo Aereo.  Its appeal is that it is a clever contemporary circus piece – using aerial, object manipulation, and clowning – that has the look and feel of an age-old vaudeville act.

Also presented under the Aurora Nova umbrella is Kallo Collective’s Only Bones at Summerhall, which (I have been told, although the programme doesn’t say this) is also by Thomas Monkton, working in collaboration with Gemma Tweddie, and features ‘head juggling and jellyfish’, so I’m in. Aurora Nova’s Wolfgang Hoffman, a man of impeccable taste, is also bringing back the ever-popular A Simple Space by Australian circus company Gravity & Other Myths – this one is more circus than theatre, a really good and exhilarating acrobatics show by a charming troupe of performers.

Another circus show to look out for is Throwback, presented by Jackson Lane’s resident company Silver Lining, who’ll be at Circus Hub with ‘a love letter to nostalgia’. I haven’t seen this company yet, but if Ade Berry of JL thinks they’re good, I’m there, Also at Circus Hub is the returning Lost in Translation hit The Hogwallops, featuring a fabulously faux-chaotic (circus) family of misfits. At the gentler end of the circus spectrum, the Spiegeltent on the Meadows that is one of the Circus Hub venues this year will be transformed each day into a bedroom to invite audiences to snuggle up and relax in Upswing’s Bedtime Stories. That sounds like a welcome oasis in the August mayhem. It might be mostly aimed at young audiences, but I reckon we could all do with a bit of that at the Fringe… 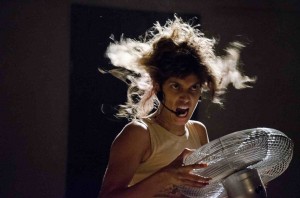 Not a circus show – although created by circus-trained physical theatre performers – is Molhados&Secos by renowned Brazilian company ParaldosanjoS. Vested interest declaration: I am co-producing this one. But I’m doing that because, having spent a great deal of time with the company in Brazil, I witnessed them making magnificent performance work that uses a variety of forms – from aerial circus to site-responsive and community-engaged work in remote communities in Sao Paulo state – and I really wanted to see their work in the UK! Everything they make and do is utterly delicious. Bold, vibrant physical theatre from Brazil – a poignant and poetic reflection on human fragility in the face of the forces of nature, that is at times dramatic, at times comic, and always visually enchanting. They’ll be at Zoo, 14–29 August.

Zoo is always a great port of call for anyone interested in physical and visual theatre work. I’m going to take my chances with Fabbrico del Vento’s dark clown show Petrol – because who wouldn’t want to see a show by a company whose name means ‘made from the wind’.

Also at Zoo: Contemporary? by Arts Printing House, which I’m told is an award-winning smash hit in its native Lithuania, around Europe and beyond. ‘This ironic parody of contemporary dance isn’t afraid to expose the clichés of the genre, whilst at the same time displaying thrilling skills.’ Sounds good to me! I’m always up for anything that challenges the cliches of contemporary dance. Contemporary? is one of a group of four Lithuanian dance shows at Zoo this year. The Moscow Boys also look interesting: a bunch of musical clowns playing all sorts from Tchaikovsky to Justin Timberlake.

Elsewhere, there are a number of interesting looking shows at Dance Base, a venue I always enjoy going to. I have my eye on The Rooster and Partial Memory, a dance-theatre double bill from Palestine ‘conveying the sociopolitical realities of the region’. Offering a haven of calm at the Fringe is gentle mime and storyteller David WW Johnstone, who brings Green Tea and Zen Baka, ‘a quietly understated, gently humorous daydream of a zen fool’. Haven of calm is becoming a bit of a theme in this round-up… But seriously, these slower, gentler shows are so much appreciated in the midst of all the loud and zany noise of the Fringe. 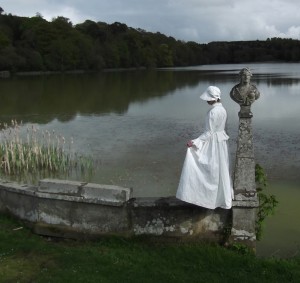 Off-site and away from the Edinburgh Fringe mayhem (there I go again), perennial Total Theatre favourites Dudendance are back this year with The Lady Vanishes, a slow sculptural performance inspired by Victorian spirit photography and set in the grounds of Haring House. It is presented by Summerhall and on for just two dates, 14 & 15 August. Get in!

The brilliant mask-theatre company Familie Floez are bringing Teatro Delusio (a show I love dearly, set backstage at a theatre), to Pleasance Courtyard. Also at Pleasance Courtyard: Scary Shit by Fringe first timer Rhiannon Faith is (apparently) ‘quite reminiscent of early Bryony Kimmings’ outings in feel… Funny, kooky, quirky and outrageous, this really is the shit!’ OK, sold… I’m there.

I also like the look of Yokai by The Krumple, which is offering ‘dance, magic, poetry and utter stupidity’ in a tale of ‘our attempts to find hope in moments of despair’ (Underbelly Cowgate). 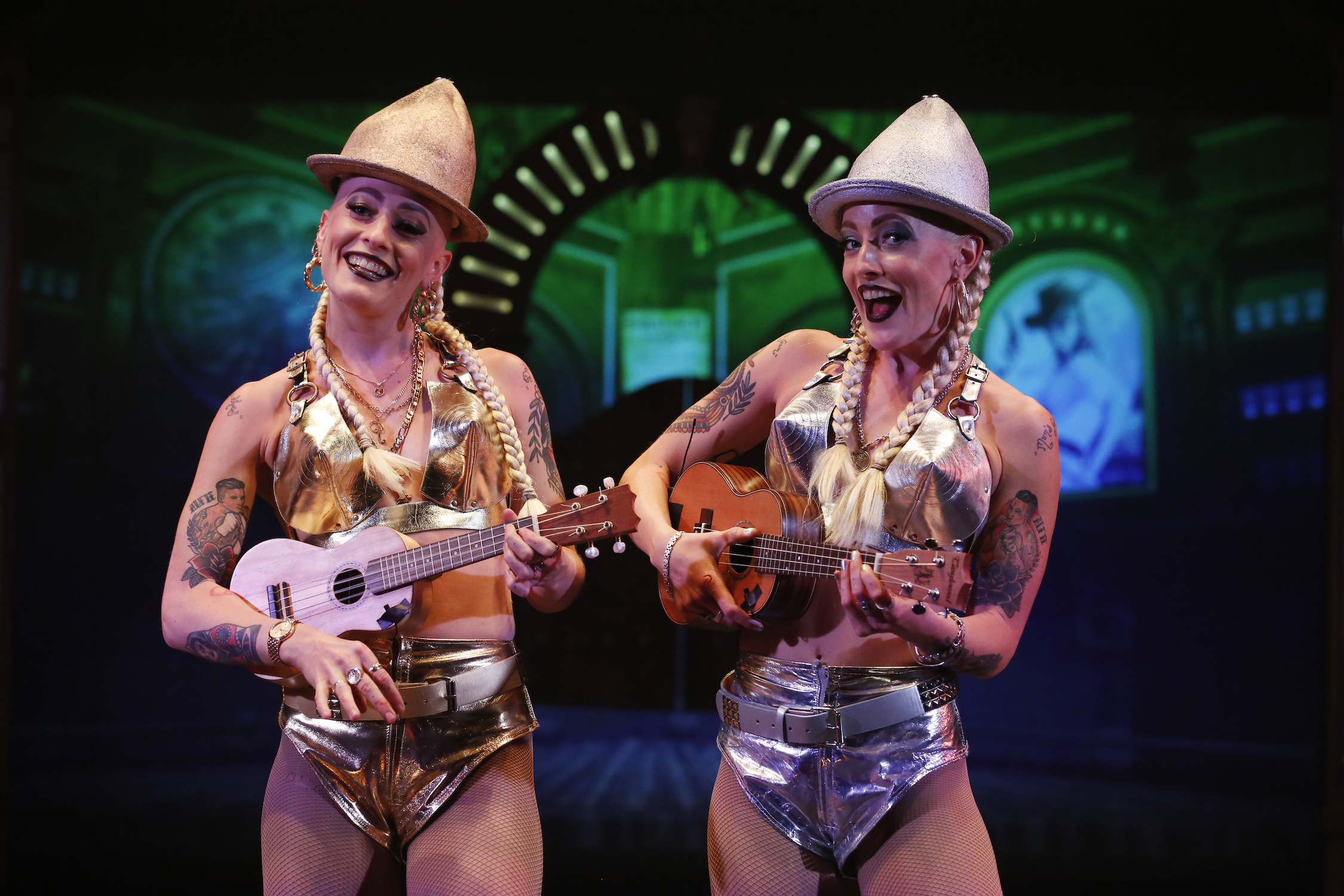 My Bad Sister at The Raunch

Over in the Cabaret section of the brochure, there’s plenty of returning favourites with a clown or circus bent, including the fabulous all-male Briefs company with Briefs Factory (Assembly Hall) and Briefs Factory Presents Sweatshop (Circus Hub on the Meadows); and both Club Spiegel and La Clique Encore at The Famous Spiegeltent, Andrew Square.

Fresh from a successful season at London’s Wonderground, The Raunch which brings together legendary UK cabaret performer Empress Stah and a motley crew of international cabaret and circus artistes in ‘a whip-cracking, rodeo-rocking night for the fun-hearted, not the faint-hearted’.

If you’re after something new (well, it’s new to me anyway) perhaps take a chance on grotesque and gorgeously surreal showgirl Grumble in Sex Clowns Save the World at Underbelly; or New York cult horror sensation Dandy Darkly’s Myth Mouth at CC Blooms.  Snap at Assembly George Square, presented as part of the Korean season, promises a multi-faceted performance merging magic, mime and illusion.

In other cabaret highlights, look out for the ubermeister of lounge comedy-cabaret Frank Sanazi at Voodoo Rooms; New York’s Lady Rizo with Multiplied, digging her sparkling heels into new motherhood at Assembly Checkpoint; and the irrepressible octogenarian Lynn Ruth Miller examining the men she has loved at C Nova.

On the other hand, there’s always Come Look at the Baby, which is exactly what it says on the can. An actual baby, on display, doing what a baby does – no tricks, no illusion, just taking the contemporary cult of the non-actor to its obvious conclusion. 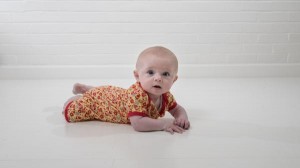 Come Look at the Baby

All the above mentioned shows can be booked at www.edfringe.com