Horta Moreton is a cultural thinker, commentator and social activist trying to make the world a better place. Contact: hortamoreton@gmail.com 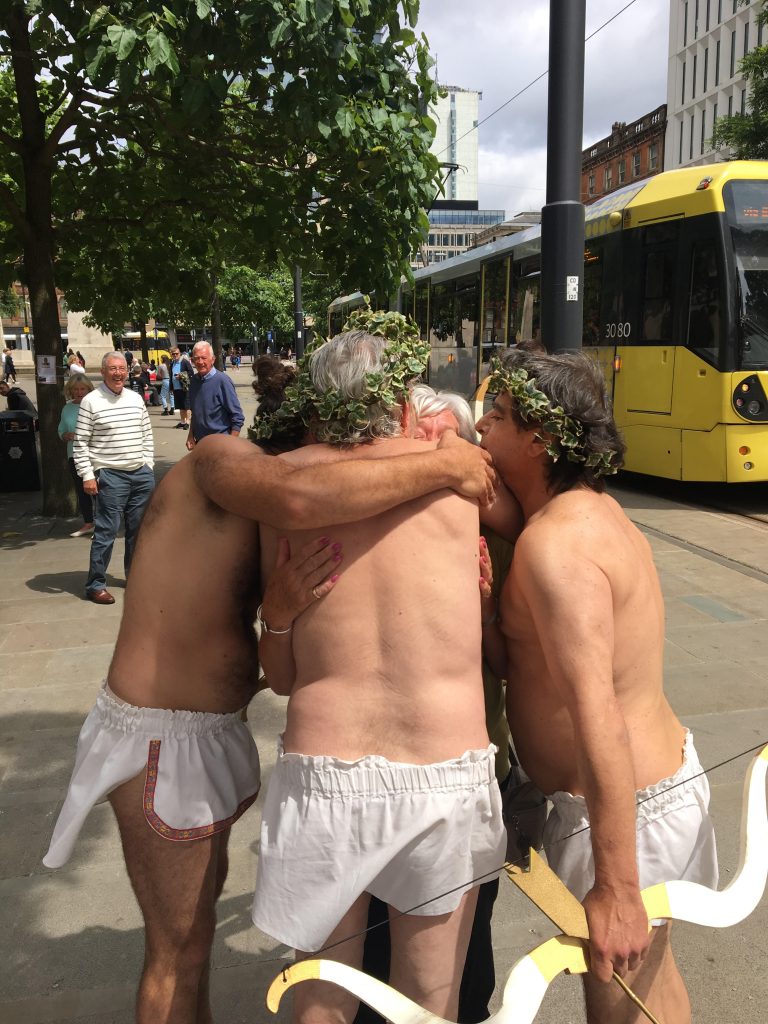 Nowadays, Outdoor Arts are taken seriously as an artform – funded and programmed within festivals, with risk assessments and audience evaluations to the fore. Which is all well and good – but what happened to the anarchic immediacy of traditional Street Theatre? Oh hang on – it does still happen! Horta Moreton reports on the Permission Pending uprising in Manchester city centre

Three zoo-keepers wrestle with a giant snake on the tram. Inept paramedics offer first-aid opportunities but leave a trail of hazards. A haughty woman walks along the high street holding three panting men on dog leads. Aged cupids in loincloths create tableaux of love with passers-by. A man’s red-tinted buttocks protrude from a hole in his red overalls.

These sights in a British city this summer are not part of a clever outdoor festival event. Not advertised, completely un-scheduled, with no stewards or even any official permission sought, they cause a ripple of reaction from shoppers and passers-by. Puzzlement, intrigue and laughter from many, others doing their best to pretend it isn’t happening – and even annoyance from some. But it is stopping people in their tracks, making them pause to comprehend what they see, and giving unexpected joy – both in the events themselves and in watching other people’s reactions.

One man, with a certain amount of almost proprietorial pride, tries to help me understand what’s going on: ‘I’ve no idea what they’re doing’ he tells me ‘but they’ve been at it all day… I’ve followed them all the way down from Market Street…. its bonkers! Just wait, now she’s going to spray him… watch this!’

Another man films the sights on his smart-phone whilst giving a running commentary: ‘There’s a giant snake! On the tram! it keeps trying to escape!’ He is creasing up with laughter but keeps filming: ‘Now its coiled around them all, crushing them, look!’ then to those around him, ‘aw man, so funny, this is the best thing I’ve ever seen!’

Perhaps this is cultural democracy open to all; maybe public playfulness helping enhance creativity; or possibly arts that challenge, change perception, create cohesion. But it’s off the cultural map, not Arts Council funded, nor council sanctioned.

It’s an ‘Intervention into Reality’. 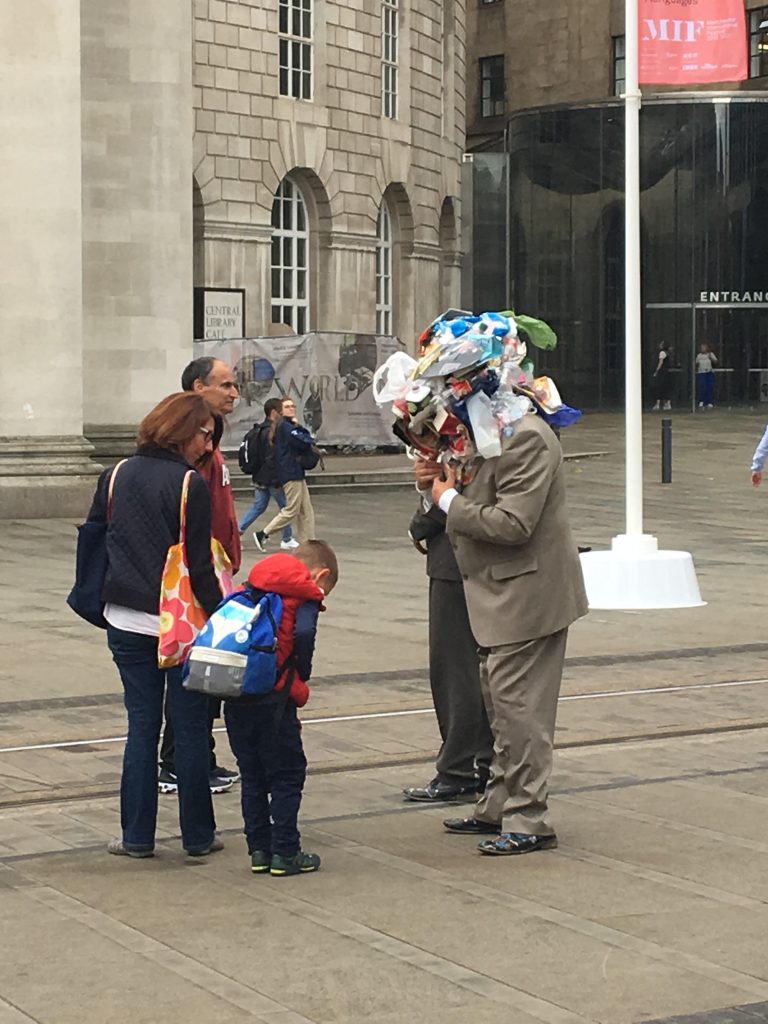 Increasingly, Outdoor Arts are appreciated for their visibility and spectacle, their proven ability to attract a spectrum of audiences that matches the make up of the real world. It’s often the poster child – filling pages of arts reports with thrilling photographs of happy, diverse crowds mingling in ways seldom seen.

Of course I’m not talking about any live event happening outdoors. Ticketed theatre-in-the-park events may take place in open air, but their sensibilities lie in the theatre and their audiences match the usual subset.

I’m talking about shows which play with genres, interact with locations, pervert situations. Performances which people stumble upon in everyday places. Acts which ask you to see the world a little differently, challenge assumptions, perhaps even play with the very concept of reality.

Developed in the counter-culture of the 1960s, British artists were pioneers in the evolution of ‘street theatre’, when the notion was to challenge orthodoxy, to change thinking, to ‘freak the squares’. The makers and performers attracted to this field are connected to circus, busking, live art, improvisation and social activism.

The Permission Pending events this summer (July 2019, Manchester) were funded by someone who loves this approach and the rich possibilities it offers, but is frustrated by the predictability of much being presented at festivals of outdoor arts. (Editor’s note: that ‘someone’ is an extremely experienced and well-placed festival director who prefers to remain anonymous!)

To0 often, selected shows do the rounds – often carefully manufactured in dance studios and requiring prepared, flat spaces, large PAs, special flooring, seating even. This play-it-safe approach has little connection to the sectors roots or its potential. Have we forgotten the joy of mischief, the bizarre, the risky? Has the standard Outdoor Arts offer become risk averse, bland, bureaucratic?

Permission Pending offered a reminder of the unruly, prankster, surreal possibilities of Street Theatre at its best.