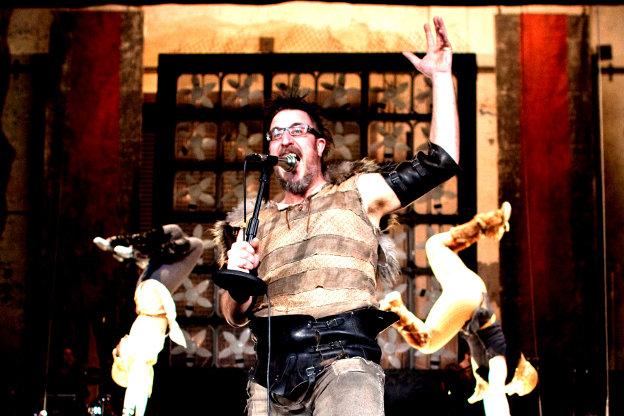 The initial framing device of Beowulf – A Thousand Years of Baggage is strong: three characters with a different take are our guides to the Anglo-Saxon epic poem. Each has their own intonation and style of speech; I particularly like the literary academic who speaks in that odd way that Air Cabin Crew do, emphasising certain words for no apparent reason.

The band behind them is quirky looking and has an impressive range of instruments, and is joined by more players who march through the packed Spiegeltent in the late evening light.

The audience has a role as the King’s court at his Mead Hall. It is jolly and well played and fun.

Beowulf is essentially a poem about battles and monsters and revenge. It has further levels of complexity and must have been a powerful and evocative listen for its original community, rich in nuance, danger and magic. This production however side-steps any attempt at depth or at gaining an emotional connection to the characters. Instead it opts for the broad-brush, audience friendly, music-led, story-light version.

It takes as its major theme the maternalistic vs paternalistic society and sticks doggedly to it. Narrative is sidelined. Beowulf and his adversary Grendel (Jeremy Back) are dudes, Grendel’s mother (Jessica Jelliffe) is a revengeful witch, and King Hrothgar (Rick Burkhardt) seems to disappear.

The opening witty exchanges become rare as it dissolves into a motley musical, with songs in different styles – the blues number, the rockin’ number, the female wailing number. The performers are all strong and can deliver, but it is formulaic and has limited theatrical flourishes – namely thumb wrestling, water in containers, and a giant arm (now that was funny).

I’m all for a good time in the theatre, but need something more than a dramatically simplistic view of such a potentially rich text. A company like Little Bulb could, I think, have given it more depth and variety. The setting was good for it, and the audience cheered a lot, but it was certainly more of a late night fringe show than a main slot international festival offer.