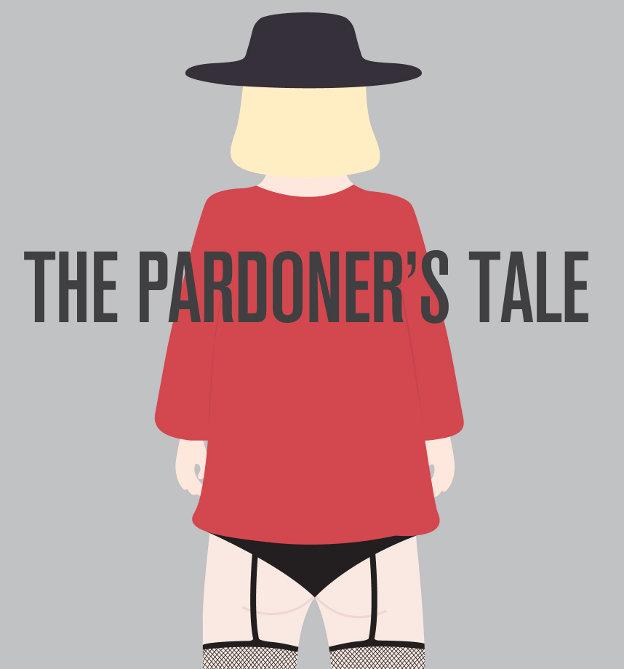 Chaucer’s ‘The Pardoner’s Tale’ is a staple of GCSE and A-Level English; it’s a better bet than ‘The Knight’s Tale’, slightly cleaner than ‘The Wife of Bath’, and has a good strong narrative at its centre. This show is aimed at a school audience, with all the workshop potential (and income – let’s not forget the money) that brings, but has an energy and delight all of its own. Performed in an atmospheric church library with stone walls, a huge fireplace, high mullioned windows, and forbidding crosses the very venue itself references the perversion of the trinity ‘The Pardoner’s Tale’ is sometimes seen as referencing.

It’s very physical theatre from the start as two young men in frayed brown costumes rhythmically clap hands on shoulders and knees, stealing cards from one another in a ceaseless and repeating pattern. The Pardoner, with his pale face and sickly golden hair, sits in rich red robes watching it all happen from the shadows  while a fourth member of the cast plays on the guitar. The comedy starts properly as the slight breathing noticeable beneath the strange pile of clothes and boxes in the centre is revealed to be the third man of the tale. With much tossing back of cans, and a good amount of ribaldry, cross-dressing and debauchery, the tale begins in earnest.

The Pardoner, portrayed as the Host describes him, is suitably creepy, deceitful and nasty – readers of Chaucer will remember that after telling the assembled company the cautionary tale of avarice, and after boasting how all his pardons are complete fakes, he still tries to sell them. I can’t help thinking that By Moonlight Theatre missed a trick here – within this enjoyable mix of song, slapstick, mime and action, the Pardoner seems to me to be the epitome of a game show host; he could have been nicer on the outside to be fouler on the inside. The genuinely creepy make-up and churchy evil and stringy, wavering voice of the Pardoner feel a bit clichéd and overdone in the villain department.

But the tableaux of mime and song is watchable and very funny – warm (yes, still warm!) pizzas are distributed to the audience, women’s clothing and fake tits are enthusiastically donned, and there are some great visual jokes and a versatile live soundtrack from the guitarist at the side. The three robbers gradually approach the climax of the play with comic abandon.

So a skilled, entertaining and raucous performance that keeps the audience watching and laughing – it will be an asset for those new generations studying ‘The Pardoner’s Tale’: a lot of fun for them to see, and a good experience of live physical theatre.