‘Indigenous resilience. Three women running for their life. Separatist politics. A confrontation of toxic masculinity. And unrelenting puppet deaths. This is CanadaHub.’

In his introduction to the second year of CanadaHub, a curated programme of work from across Canada presented at the Fringe, producer Michael Rubenfeld warns against complacency in this most difficult of times. Yes, he says, cuddle up to Canada, which has become an ‘international beacon for reasonability and progressive social politics’ but while we’re cuddling, be aware that the country does have problems, and there are nuances. 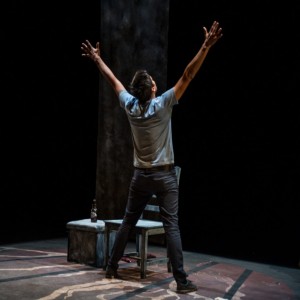 Cue Huff by Cliff Cardinal, a one-man theatre show of the good old fashioned sort: by which I mean a show in which one person – the actor-writer – plays a multitude of characters, all enacted through skilled physical transformations. Although ‘skilled’ hardly does justice to the man’s extraordinary chameleon abilities, as he tells the story of a family caught up in a cycle of violence and abuse, from the perspective of a middle son of three. A hoodie up to become the psycho older brother who beheads hamsters and rapes his siblings; screwed-up eyes and shortened neck to become Rat Face, the hated elementary school teacher; a puffed chest to become the embittered father bursting with toxic masculinity; a bent back and lowered head to become the kokum (grandmother) who sees her daughter beaten and defeated, her youngest grandson following in his mother’s footsteps and committing suicide by hanging, and her son-in-law degenerating into even more of a drunken lout than he is at the start of the story. Yep, happy days. The setting is a reservation – the reduced status and social problems of the oppressed Indigenous people being one of the prime unsolved Canadian ‘problems’ that Michael is referring to.

There are times when the old-school physical and devised theatre device of having-a-conversation-with-yourself becomes exhausting, and I’m happier mostly with the longer monologue sections or the storyteller mode. But there’s no getting away from Cliff Cardinal’s immense talent as a writer and performer. Although a fictional play, the story is informed by Cardinal’s own research and inside knowledge of Indigenous communities in Canada. The Native American Trickster spirit is a key player in the story, the device of a radio broadcast is a recurring motif, bringing us messages from the Trickster: [crackling white noise] ‘This is shit creek radio, and you’re up it without a paddle.’ Cliff Cardinal’s storyteller pays him his dues, shapeshifting from role to role with superb ease… 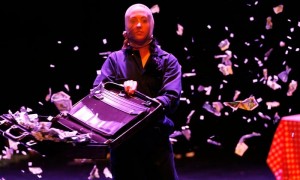 The Trickster (although a more playful manifestation) is also on the loose in Ming Hon’s Chase Scenes, in which three women performers take turns grabbing the camera and subverting the traditional male gaze on the female body in distress on film. You know, all those films in which women are chased or stalked or terrorised? All those films in which men perpetrate the bank heists and bomb plantings and car chases? The three women – Ming Hon herself, with Alexandra Elliott and Hilary Anne Crist – are tornados of energy who hardly stop to breathe for an hour – except when they film themselves or each other rapid breathing wildly after a particularly strenuous bout of running, jumping, or screaming. There are 60 one-minute scenes, and they segue manically from one to the other, swapping roles as camerawoman and actress; ridiculing the traditional female role of victim with gleeful enthusiasm and boundless energy (they are all trained dancers, and this is a supremely physical piece of work). It is absolutely, totally, brilliantly hilarious from start to finish.

In the first scene, The Park, two are behind cameras and one is acting. Running, basically – through the space, on the spot. There are two screens at the back, one showing pre-recorded film (footage of the woman walking ever-faster through the park, glancing behind her in increasing panic), one showing the close-up shots from the live video feed. This is the pattern for many  of the scenes – we get to see footage shot in a multi-storey car park, an alleyway (Dead End), a stairwell, the outside part of the hall we are in…

Stolen Goods, Gunfire, Bomb, Axe, Cops and Bedside Weapon are some of the scenes dealing with classic tropes of thriller or horror film. Nature is a recurring theme – in, for example, Fog, Blizzard, Jungle, Forest and Desert. Every cliched sound and vision effect you can imagine is employed: smoke machines, waved greenery, Foley wobble boards as instant wind machines. The stage area is a ridiculous, beautiful mess of costumes, props and mini-sets (a mattress, a table and chairs) and clothes are ripped on and off with gay abandon.

Outside of the horror/terror/thriller mode, other types of chases and dashes are explored: Late to the Gate sees our one-minute heroine dragging a large suitcase around the space, howling as she misses her plane; Parkour has her literally climbing the walls of the theatre to end up dashing around the balconies. Heroine/Body Double has one woman filmed from the waist up as she runs on the spot effortlessly in trainers; the other filmed from the waist down as she trips along in her high heels. There are some really weird ones too, that move beyond the regular running and chasing, such as two different Nightmare scenes that show pre-recorded footage of a sleeping woman tossing and turning in bed whilst live she enacts what she thinks is happening to her body. (Her legs don’t exist! Her feet are stuck to the floor!).

Chase Scenes is a very clever deconstruction of the mores of Hollywood film, a brilliant role-reversal game, and a Trickster-Clown play on our worst fears. 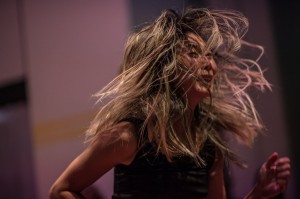 Also in the 2018 CanadaHub programme: there’s another humorous exploration of death and disaster in The Old Trout Puppet Workshop’s Famous Puppet Death Scenes; a Scottish/Quebecois collaboration, First Snow/Premier Niege, which uses the separatist politics in both Quebec and Scotland as a backdrop for complex family drama; and a harrowing exploration of toxic masculinity, Daughter, performed by Adam Lazarus. The venue (Kings Hall, just across from Summerhall, who are partners in the project) also hosts CanadaClub for the first time – late-night club featuring Canadian comedy, circus and cabaret.

It’s great to see CanadaHub thriving and growing in its second year, and good to see a selection of Canada’s innovative new performance work finding its way on to the Edinburgh Festival Fringe.

CanadaHub runs 1-26 August (not Mondays) at Kings Hall. Bookings through Summerhall or at: www.canadahubfringe.com 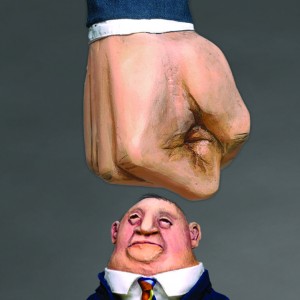