Circus Hub is in its fourth year at the Fringe, and in my umpteenth year here in Edinburgh in August, I spend my first afternoon of reviewing duties ensconced here on the Meadows, seeing four very different circus shows from around the world.

The two tents of the Hub – a blue-and-white Big Top and a Spiegeltent – sport good full houses for all the shows I see, and audiences include a large number of children, as can be expected for circus shows. Although I feel the need to note that circus is for everyone, not all shows are child-friendly, and there are dark things to be found under the all-encompassing umbrella of ‘circus’. For example, it was particularly puzzling to see last year’s Total Theatre Award winning show Fauna described by some venues it subsequently toured to as ‘family friendly’. It is not how I’d describe it; it’s pretty grown-up in its themes, and I saw a fair few puzzled young children at the Brighton show. Which is not just by-the-by, it’s a way of introducing the latest work by Australian maestros Circa – Wolfgang, which is a children’s show, for age 3 upwards, presented in the Spiegeltent (‘The Beauty’).

It’s great to see a company of this stature acknowledging that young children need quality circus shows made especially for them. Of course, it can be enjoyed by children of all ages – and I certainly had fun – but the most fun of all was seeing the delighted faces of the younger members of the audience, laughing wildly at clowning which was pitched at exactly the right level for them, and gasping at the acrobatics, chair-balancing and cycling tricks, all presented in a mode appropriate for young viewers. There’s no cringey playing to the adults here (the nasty nudge-nudge bane of so much children’s work), and no condescending playing down to the young audience. All the humour, all the action, is clear, precise, child-friendly, and of the same superb quality as any other production by Circa. It’s a three-person show: an accordion player, who is also a clownish character in baggy gold suit and angel wings; a bewigged and powder-puffed male acrobat who is Wolfgang (Wolfgang Amadeus Mozart – or perhaps just someone who thinks he is and takes on the mantle, in true clown tradition); and a female in a cheeky black-and-white playsuit and party hat (ah yes, the colours of the piano keyboard) who is muse/conjuror or ‘spirit of the music’ or perhaps even the piano itself… 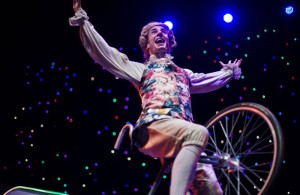 Wolfgang finds himself in battle with the music in many marvellous ways: we have the classic Charlie Chaplin fight with a music stand (also employed in recent circus history by Thom Monkton in The Piano); a gorgeous slo-mo fisticuffs between the two acrobats; batons turning themselves into bunches of flowers; and escaping sheets of music flying everywhere.

Elsewhere, Wolfgang does some ace trick cycling whilst being helped by his muse to go from almost naked (squeals of laughter at his unlikely combo of beige underpants, socks and wig) to fully kitted out in silver leggings, colourful waistcoat, and dashing frock-coat; there’s some terrific acrobatics and acrobalance, including a moment where our musical muse manages to base her partner whilst  sur pointe; and a very funny sequence of conducting the spotlights, in which the muse always wins. The soundtrack is a lovely mix of Mozart favourites, some pre-recorded, some played live on accordion, which works surprisingly well. A delightful show, which will charm audiences of all ages. It’s coming to the Barbican at Christmastime, so London audiences will get a chance to experience the joy and magic that is Wolfgang. 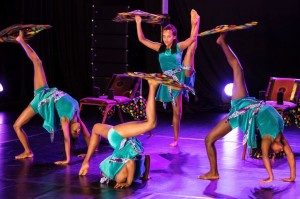 Next, Circus Abyssinia with Ethiopian Dreams, a crowd-pleaser returning to the Hub after great success in the 2017 Fringe. We start with a feel-good dance, the full team (I’m pretty sure that’s ten men and four women) onstage. I enjoy watching their faces: some look ultra-confident, some neutral, some smiling a little nervously. The emphasis in this show is on the tricks, not stage presence or theatricality. We are presented by a succession of high-quality acts – the men and women never appearing onstage together unless it is for a brief transition or for the dance numbers that begin and end the show. Definitely no body contact between them. The emphasis is on acrobatics and juggling, with no aerial acts. Traditional gender roles within circus are also adhered to. The men build human towers and tumble magnificently; the women are snakey contortionists, twisting themselves into very beautiful bends and bridges and unbelievably complex positions in which heads and limbs become shared body parts. I don’t think I’ve seen four contortionists work together in this way – they are truly astonishing. The men juggle hard red and green plastic clubs; the women foot-juggle soft multi-coloured cloths. There is a sweet hula-hoop act that is miles away from the usual raunchy burlesque vibe many hoopers employ. All of this happens to a great soundtrack that mixes languages and beats with a wide range of instrumentation: a hint of Lust for Life here; a traditional chordophone sound there, a gorgeous jazzy African female voice (Gigi, perhaps?) at another moment . One of my favourite moments is a rare theatrical one, when the group of men carry on two Chinese poles to the sound of a slow lament – although once the poles are erected, the mood is broken and we switch to flashing lights and an electro beat, and a thrills galore pole and tumbling finale. Feel-good fun for all the family – and fine as long as you don’t mind the traditional gender stereotyping. 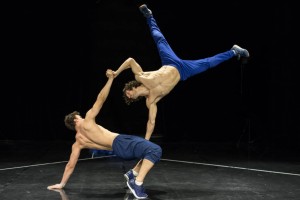 SHIFT, on the other hand, is a piece of contemporary circus full of theatrical know-how, which explores and dissects human relationship (gendered and otherwise). It’s the latest piece from Barely Methodical Troupe, whose first show Bromance won them a Total Theatre Award and whose second show Kin proved them to be far more than a one-act pony. One of the many things that I love about this company is their dedication to continuing research and change. They could easily have stuck to the endearing three-man buddies-on-stage Bromance format, but instead choose to work with new collaborators on each project. In this case, we have two of the ‘Bromancers’ Charlie Wheeler and Louis Gift, joined by Esmeralda Nikolajeff and Elihu Vazquez. SHIFT was commissioned by Norfolk & Norwich Festival, where I first saw it. A second viewing, two months on, leaves me feeling that here we really have a show of quality and substance.

The set-up is simple. We have four people, three men and a woman, and a variety of elastic belts – large rubber bands, essentially – providing the cast with plenty of opportunity for quipping, from the very first moments onwards. (‘Throw me a line please’ ‘Friends, Romans, countrymen… ‘What’s the name of your band?’ ‘Rubber band.’)  The belts are used to explore power, tension, balance – it was Jacques Lecoq who said that all theatre is about push and pull, and here that maxim is taken literally. The company use the physics of give and take to move into an exploration of friendship, togetherness, trust. In one fantastic sequence Charlie Wheeler is ‘puppeteered’ by the others, moved and twisted into all sorts of relationship with each of the three other bodies. This scene leads into a Cyr wheel section which starts by highlighting Charlie’s immense talent on the wheel – but then moves into an extraordinary interplay between all of the ensemble, ending with Esmeralda Nikolajeff using the wheel for a balanced walk that moves from vertical to horizontal.

Esmerelda is a formidable talent. Working on hand-to-hand sequences with Louis (a big, strong base) she is tossed and swung, raised high in the air, then plummeted to the ground, seemingly light as a feather, but then it moves into a weightier acrobalance mode, the two creating astonishing balances, with Esmerelda at one point bearing Louis’ weight on her back, and then basing him in an on-the-shoulder stand as the audience gasps in astonishment. There are also many three-way and four-way hand-to-hand (or perhaps we should call it hand-to-foot) scenes, in which the performers climb over each other’s bodies and mould themselves to each other with elegant fluidity. The fourth member of the ensemble is Elihu Vazquez, an extraordinarily fluid breakdancer and acrobat. Each of the four is given space to showcase their individualism, and each also contributes equally to the ensemble work. Complicity is all.

When I saw SHIFT at the Norfolk & Norwich Festival Spiegeltent, where the show premiered in May 2018, I sat at the back of a booth, behind a pillar and, apart from poor sightline issues, missed much of the spoken text. Here at Circus Hub (also a Spiegeltent) the sound is better and the delivery of the text stronger, but sometimes I’m straining to hear the words. Sometimes this is fine as the lines are throwaway humorous quips and it doesn’t matter if not everyone hears them. At other times, the text needs to be heard. This issue is still not 100% resolved, and it is hard to know what the solution would be as radio mics wouldn’t work in this context, and the circus-performer-moves-to-the-mic-stand motif has been sorely overdone in recent years. Regardless of this small gripe, glad for this second viewing of such a beautiful and inspiring show by one of Britain’s top contemporary circus companies. 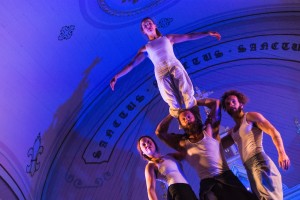 From the UK to Quebec, and from The Beauty back to The Layfayette, for  Cirque Alfonse. The company were previously seen at the Edinburgh Fringe with Barbu, and Tabarnak similarly combines butch beardy-man acrobatics with exuberant traditional Quebecois music – but there’s a whole lot more too. With a free-hanging stained-glass window and half-a-dozen wooden pews as the set, Tabarnak is a tongue-in-cheek exploration of the sacred and the profane – inviting a reflection on the comparison between religious ecstasy and the full-on ecstatic experience of singing, dancing or swinging by your neck from strops whilst wearing rollerskates.

Amen. Ah, men! Tabarnak sees the big burly blokes on-form as ever, with some wonderfully powerful pyramids and towers emerging and tumbling down. The pews, of course, become balancing equipment. There is additionally a male aerialist whose straps routine is phenomenal. In fact, everything he does is jaw-droppingly good. But, surprisingly perhaps for an Alfonse show, it’s the rollerskating whip-wielding women who capture my heart in this piece. Keeping up with circus trends worldwide, we see female strength on show, as the women move beyond the traditional flyer roles seen in Barbu. I also love seeing the men doing a skater’s waltz together, not to mention the knitting… Humour is paramount. There’s a brilliant bell-ringing duet on ropes, and a gorgeous scene in which incense holders on chains become swinging poi. A water tank becomes a surreal baptismal font; and eventually, that stained glass window transforms into an unusual piece of aerial equipment…

In this company, the live music and the circus go hand-in-hand, with acrobats turning into hair-shaking singers, or nipping up and grabbing a guitar or fiddle. The band’s female percussionist (and everyone of course knows women make the best drummers) is a tour-de-force. She beats on her kit, standing. She plays what I take to be a Quebecois version of the Celtic bodhran with aplomb. She taps and stomps on a wooden board. She plays musical saw. And she joins the two female acrobats in the whip-cracking scene, turning this Western skills number into an experiment in percussion. Mesmerising as all the rest of the stage action is, my eyes keep returning to her.

Tabarnak is such a joy, so life affirming, such a pleasure to witness. Hallelujah, brothers and sisters! 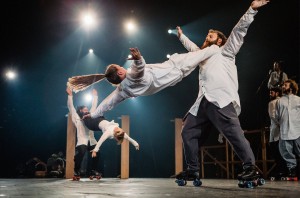 Circus Hub on The Meadows presents circus and cabaret work in two tents, The Lafayette and The Beauty, from 4–25 August 2018 and is part of the Underbelly programme at the Edinburgh Festival Fringe. See www.underbellyedinburgh.co.uk