Colombia! What do you think of? Cocaine? You surprise me.

Miguel Hernando Torres Umba is Colombian, and he has a confession. He has never taken cocaine. His brilliant and beautifully performed one-man show, Stardust, is his response to ‘the painful stigma left by the narco history of his country’. And he takes no prisoners. We are all implicated in the story of the coca plant’s journey from sacred indigenous medicine to recreational drug of choice across the world – a trade that leaves a horrific trail of death and destruction in its wake. A leaf, a line, a life…

But let me say straight away that Stardust is no po-faced performance-lecture. Blackboard Theatre give us a vibrant combination of first-person storytelling, physical theatre, and projected animations that seduces us with its roller-coaster delivery, punchy humour and beautiful visual images. One minute, we’re in a classic storyteller or even stand-up mode: full-on monologues about Colombia’s history, clever quips about the drugs trade, and a flirtatious relationship with all members of his audience. The next, Miguel has moved upstage and behind a gauze screen where he is in his own sacred performance space: a bare-chested indigenous Colombian enacting a coca-leaf induced dance that opens the throat chakra, the beautiful animations of plants and trees and gods and goddesses (created by Diana Garcia) flickering in interaction with the moving body; or later, wearing a traditional white skirt that becomes the site for the projections, telling harrowing tales of the lives of farmers’ families caught up in a no-win situation when their lands are appropriated by the drug barons, and they have no option but to comply.

He even manages to use the dreaded gameshow motif in a way that is sassy and interesting, as he challenges us to play the outrageously funny Plata o Plomo (‘Silver or Lead’ – a Colombian slang expression that means, take a bribe or take a bullet.) The writing – credited to Daniel Dingsdale, working in collaboration with Blackboard Theatre – is super-tight; and the actor’s performance mode is always perfectly pitched – right from the first moment, when we are greeted and seated, to the last, when he throws down the performance gauntlet and offers his message of hope for his country and for the world, we are his friends, his guests. Mi casa es tu casa.

At the end of the show, Miguel recommends that we go see Circolombia – the only other Colombian show at the Edinburgh Fringe 2018, and co-incidently that is exactly what I do, the very next night. 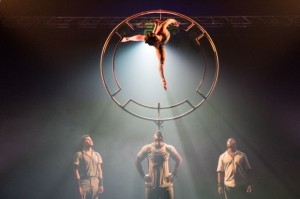 I first saw Circolombia/Circo Para Todos as part of the Circus Space Festival, at their Hoxton base, many years ago. Then, they were very much a novice youth circus troupe, comprising children and teenagers who had been rescued from the streets and slums, and brought into urban circus projects in Bogotá and Cali. I remember it as an enthusiastic and high-energy show, charming in its direct and unpretentious relationship with its audience – and in fact, that’s very much how it is today, it’s just that the skills have increased a thousand-fold.

Today Circo Para Todos is Colombia’s National Circus School, fully funded by the state with sites in the cities of Cali and Bogotá. The first group of students to complete the school’s free, four-year course graduated in 2001. Five years later, the school’s British founder Felicity Simpson (a circus performer who has worked across Europe and South America) set up Circolombia as a production company and agency for the talented graduates of Circo Para Todos.

Acéléré, Circolombia’s most recent production, has toured the world, and in 2018 makes a return trip to the Edinburgh Fringe. It makes no apology for being an accessible, feel-good show that is a non-narrative blend of contemporary Latino live music with top-notch, innovative circus acts, delivered by a troupe of fourteen.

Cumbia, Salsa, Rap and Reggaeton merge, delivered by two sassy female singers and a male rapper. We start with a high-energy song and dance routine, a dead man’s drop from height, and an energetic acrobatics routine in which human towers rise and fall. There’s a three-person corde lise routine on three separate ropes hung from a metal triangle – the three work in tandem, then each has a solo turn – one person is whirled round in a spider-web spin, another does a spectacular box split, no hands, across two ropes. A tumbling act featuring five men and one woman, two teams of three in which the two flyers are hurled from one pair to the other, enacting ever more complex somersaults and flips. A great aerial act with a man and a woman using strops from chin or wrist to suspend and spin each other. An extraordinary aerial cirque / hoop act in which the hoop is not suspended but lifted and balanced on the base’s head. An ultra-lively teeterboard act. And a breathtaking cloudswing high above the audience’s heads, with the words from the female performer that ringing around the tent – ‘I’m in my safe place, no one can touch me here’ – having an enormous resonance when coming from a vulnerable young person whose life has (probably) been literally saved by circus. Materialvielfalt u. Materialfolgekosten Es gibt 3D-Drucker, die sich für spezielle Materialien besser eignen als alternative. Für den erfolgreichen Druck von ABS ist z.B. ein geschlossener und am förderlichsten beheizter Bauraum ausgesprochen hilfreich. Andere Drucker können bloß mit herstellereigenen Filamenten betrieben werden. 3D-Druck FDM in Düsseldorf Zuerst einmal ein Nachteil. Allerdings kann jene Einschränkung gleichwohl zu weniger Problemen beim Betrieb des Gerätes führen, da man mit einem „geschlossenen System“ arbeitet, innerhalb dem die unabhängigen Bestandteilen aufeinander zugeschnitten sind.

Colombia. What do you think of?

I’m looking forward to a time, already showing signs of coming, when Colombia is world-famous for its circus and physical/devised theatre output, rather than its cocaine trade. There are other forms of highs, people – as Circolombia and Blackboard Theatre both prove. Just say yes.