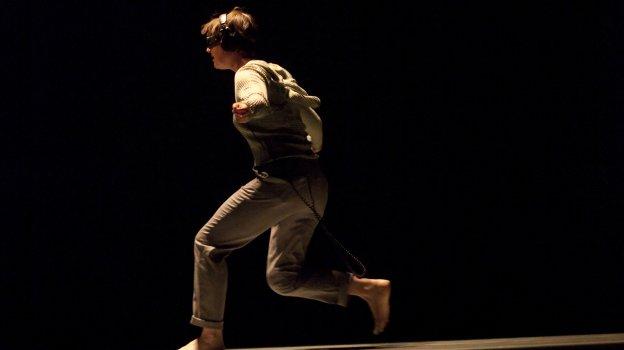 Hinterview sees Henrietta Hale, assisted by Ben Ash, attempt to draw into a physical form of expression conceptual ideas taken from interviews she conducted with people in their places of work. Concepts such as as success, happiness and fulfillment placed in the context of a contemporary economic/social climate result in concerns of collapse, strife, and renewal. And it is this struggle that Hale forcibly places into her existential journey to progress forwards.

The piece however was overworked, over-thought and failed to connect with its audience. The concept was strong, suiting a live art presentation, and it therefore would have felt natural placed in the context of a performative installation. However, from the moment the audience entered the first of two spaces used, chairs were laid out as if we were to view a performance rather more akin to theatre than living action. Perhaps, if the instructions on the programme notes were handed out to viewers before rather than after the show, we would have been more aware of our freedom to move between the spaces but even then it would be hard to save the work from its own failings. The performance by Hale, who while physically engaged in the work to such an extent that you could see the sweat welts on her face and neck after she removed her heavy-set headphones and ski goggles following the first action, was emotively forced. What should have been alive and should have felt in the moment of the action was acted out poorly. Indeed by the time it became apparent that her opening repetitive actions were an embodiment of the struggles, trials and tribulations of the greater concepts taken from the interviews, one began to question how rehearsed her mutterings of self doubt were. Concluding, she asked the audience to close their eyes, picturing a personal desire as she attempted to channel our thoughts; the result was vague dialogue akin to a charlatan spiritualist and the awkward undulations of her figure ‘feeling’ our emotive desires. Forced, false and ultimately a shame as there is a great work underneath that needs to be unpicked and lived, as the concept itself is a strong one.

In contrast, The Devil and The Details, located in the main theatre auditorium, fully embraced its theatrical roots as it attempted to deconstruct the creative process, creating theatre from its very undoing. Here Ben Ash returned as dancer to Lopez de la Nieta’s dictatorial choreographer. Phrases of movement were deconstructed into an aural rhythm of spoken dialogue, against live beatboxing from Thom Rackett. The dancer’s actions were then broken down further into minimal levels of gesture, before theatrical elements of satirical absurdism took the work past the point of reasonable requests a director may make on a performer. Labouring the point of self-exposure, the structure of performance-making, conventions of form and roles assumed were post-modernly laid bare before us. All of which has been done far more elegantly by Forced Entertainment many times before. The performance failed to come alive, and though this was by design, it did so without the subtle irony others have captured so well when exploring this path before. That said, the piece was briefly rescued towards the end through its stimulating use of audience interaction as the director sought to organise the response the audience gave. What could have been an awkward sticking point in many other ‘interactive’ productions was really the gem of the entire show. Hopefully as Dog Kennel Hill Project develop this performance further they will look at how this exciting moment may become more central to the work, acting as a catalyst for engagement and improvisation against varying audience response.