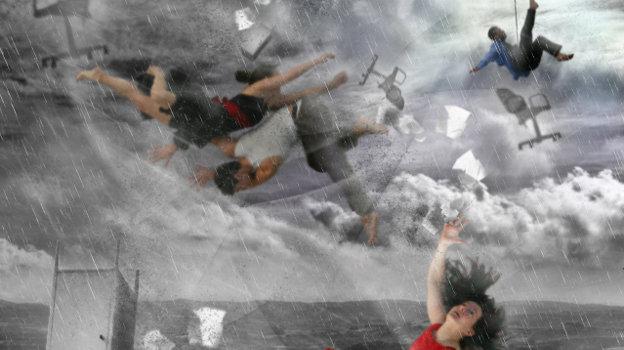 Directed by Nigel Jamieson, Wired Aerial Theatre’s As the World Tipped is a large-scale outdoor spectacular that takes as its subject the Copenhagen Conference and the subsequent failure of world leaders to initiate any meaningful directive on climate change.

It starts well. A large, square white stage is occupied by scurrying suits who move from desk to desk, working their way through towers of paperwork. The soundtrack gives us voiceover samples of speeches and discussions from the conference: President Obama’s bland, placating reassurances pitted against the impassioned plea from President Mohamed Nasheen of the low-lying Republic of Maldives, who says, ‘If things go business-as-usual, we will not live, we will die. Our country will not exist.’

Then comes the expected grand theatrical moment (the big crane behind the set is a giveaway!), as the enormous stage slowly starts to tip, and everything begins to roll off – paper flying, desks crashing to the ground (well, not quite – they are rescued by roadies as they fall, which is a slight disappointment). The now-vertical stage is raised ever-higher, becoming a giant screen.

The next section is an exciting interweaving of live and filmed action that plays beautifully with the relationship between 2D and 3D. Harnessed performers race over a speeding walkway of words, words, words; zig and zag along the lines of a graph; leap from square to square on a chequerboard of TV monitors which morphs into cuboid twin towers from which the tiny human figures tumble.

But it’s all downhill from then on – in both subject matter and performance content. We are presented with documentary-style footage of a series of global disasters – drought, tsunami, bushfire, tornado, earthquake. As giant projections of sorrowful human faces of various ethnicities stare accusingly at us, or as the screen is engulfed in floodwater or fire, the now seemingly mouse-sized performers dangle on their harnesses squealing, or bounce off the screen in various enactments of running to escape, falling off the edge of the world, jumping into the abyss – or attempting to rescue others who are falling/running/jumping.

The harnessed performers know their stuff, the film footage is brilliantly edited, and the soundtrack is cleverly mixed – I appreciated the occasional touch of ironic humour, such as the inclusion of the Elizabeth Welsh classic ‘Stormy Weather‘. The play with scale is interesting: there is one particularly lovely moment where a dangling person is apparently dropped into the open palm of an onscreen sleeping child.

So a technically brilliant show; beautifully executed; an extraordinary opening. The first 20 minutes, taken alone, would qualify the show as one of the best ever large-scale pieces by a UK company. But for the most part, the second half of the show offers no more than a repetition of the polemical points made earlier in the piece: in essence, that climate change is bad and someone ought to do something about that. ‘Demand change now?’ Perhaps ‘Be the change you want to see’ would be a stronger message.

I’m reminded of the Richard Schechner quote, ‘life is raw, but art is cooked’. More cooking needed here, I feel…