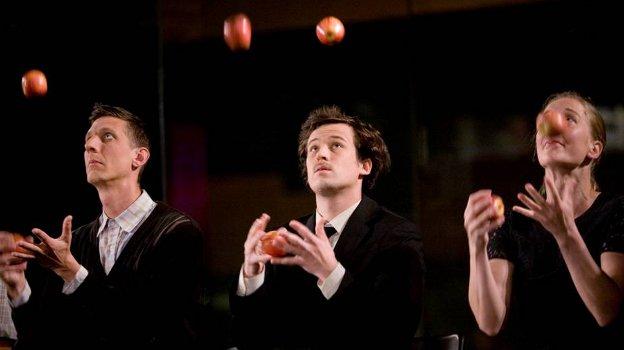 Bringing circus, theatre and dance together the Gandinis, a juggling troupe led by Kati Yla-Hokkala and Sean Gandini, made their way to the National Theatre’s Watch This Space over the weekend.

Given the fact that their two headline shows, Smashed! and Blotched, were both commissioned by Watch This Space – Smashed! for last year’s festival,Blotched for this year’s – it was surprising to see how different the two pieces were. Smashed!, very much a family show, begins with the Gandinis casually strutting onto a stage scattered with apples, juggling perfectly in time with one another and to the tune of I’ve Always Wanted To Dance In Berlin by Little Jack Little. Having already set a classy tone they go on to provide some fantastic displays of juggling prowess, the performers gradually getting more and more impressive, and mischievous, until they give up on trying to impress and begin smashing everything.

A pleasant show, it was great to have a finale that saw the effortless synchronisation turn to carefree destruction, with performers smashing and eating the apples they had previously juggled so skilfully.

Blotched was a drastically different piece; incorporating dance as well as being far more visually dramatic, it used its night-time slot to work with balls that lit up and flashed while the stage was in complete darkness, creating an eerie, quite surreal feel.

Blotched isn’t as family-friendly either. Some performers had paint spill from their mouth whilst spasming violently, others spat paint at each other and ran around on random trajectories. This resulted in an energy that wasn’t as prominent in Smashed!, which kept a more laid-back tone for the majority of the show.

Overall the two shows were at their best when light-hearted and when they involved multiple performers interlacing their juggling. It was simply mesmerising watching these artists use their unique skills to create challenging theatre. A pleasure to watch!