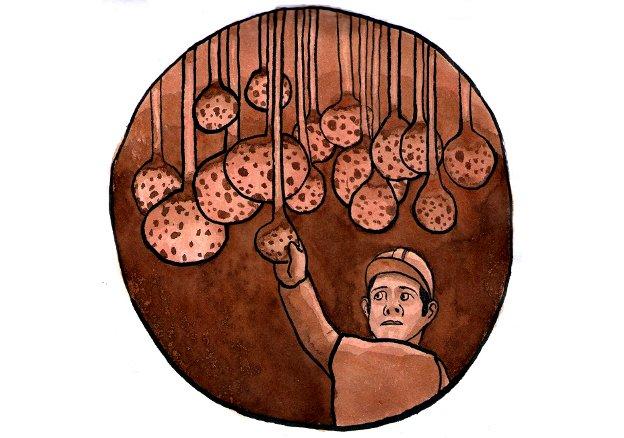 We (Sue Auty and Edward Taylor) first met touring with Horse + Bamboo (from Lancashire) and Dogtroep (from Amsterdam) in 1981.

The approach and attitude of Dogtroep inflamed our imaginations and we formed the Whalley Range All Stars in 1982 to realise ideas that we couldn’t do elsewhere. We didn’t want to be just like Dogtroep, but we liked how open they were to creating work in a variety of situations.

To begin with we made work for rooms above pubs, a garden centre, a tennis pavilion, the streets, and nightclubs, and even an exhibition for a vegetarian café.  Anywhere that would have us. Payment for the work was scarce, but in those days jobs were scarce so  it was possible to sign on without any pressure being applied.

Eventually the Tories got embarrassed about how many unemployed there were and created the Enterprise Allowance scheme. You created your own business and got a year-long equivalent of the dole to try and sustain that business. We went from a few cardboard boxes in the corner of my bedroom to a workshop in the rough end of Manchester which would not have been out of place in a Tarkovsky film.

Most of our early shows were one-offs and we were burning through ideas. At the same time a nascent circuit for street theatre was starting to develop so we began to pool some of the ideas we had and created touring shows for that circuit.  Our first street theatre tour of sorts was in 1984 and we met many groups who are still active today – Bob + Bob Jobbins, Desperate Men, Avanti Display and the Grand Theatre of Lemmings.

Warner Van Wely (one of the artistic directors of Dogtroep) advised us to keep funders like the Arts Council aware of what we were doing, so we sent them reports every year. When we first went to North West Arts (before it all got centralised) we were told we were not a touring company. When we went to the Arts Council in London we were told, ‘Go away – what you do isn’t even an artform’. We got scraps left over from the funding table, but our first properly funded show was in 2000.

We’ve now created over 70 different shows, events and installations and toured to 23 countries over five continents. Festival programmers in France used to put the phone down when I told them our name, now they have heard of us and will even attempt a pronunciation. Our last show, Imaginary Friends, had ten people in the cast and saw us collaborate with Babok from Amsterdam (with whom we share the same roots). We collaborate with artists of the calibre of Clive Bell, Matt Wand, Bryan Tweddle, Andy Plant and Steve Gumbley. We are now an Arts Council National Portfolio Organisation and this year have appointed our first ever administrator. It’s a bit of a shock.

It would be tempting to rest on our laurels, but outdoor/street theatre really isn’t the place to do that. You are only as good as your next show. The joy of working outdoors is that you can relate to your audience in so many different ways. There’s still a lot to do.

Next year we are planning to turn a disused shop into a peep-box with a large plant bursting through the windows on the first floor and workers excavating for food amongst the roots on the ground floor (visible through peep-holes in the blocked-up shop windows). The food  will be processed and sold to the public.