Hurrah. It’s my annual ‘If Edinburgh Fringe Circus Shows Were An Album’ review again, where I get to combine my two passions and indulge my inner muso-geek.

2017 was a pretty brilliant year overall and once more a delight and privilege for me to represent my venue in sponsoring the Total Theatre and Jacksons Lane Award for Circus.

So here we go with the few shows which have not yet been covered by TT – my micro-reviews-slash-obscure music-comparison-fiesta.

Cie Ea Eo’s All the Fun (presented at Underbelly Circus Hub, and shortlisted for the TT/JL Award) wasn’t exactly fun per se, but it was an intriguing, at times highly skilled juggling meditation on, well, futility and space I guess (not the astrological kind alas, although that could really have been fun – gravity defying juggling clubs anyone?). At one point the show literally deconstructed this sometimes-maligned genre, and whilst some of the set pieces were a little over-long and the silence occasionally awkward, the overall feel was of a strong and accomplished ensemble that are really trying – and sometimes succeeding – to do something different with the medium. 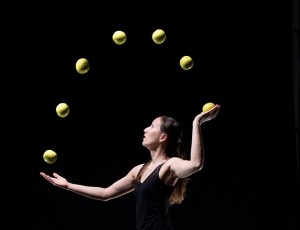 More juggling, but a totally different approach from the brilliant Gandinis. Sigma (Assembly Hall) found itself the worthy winner of the Total Theatre Award for Physical & Visual Theatre, probably because it’s neither dance nor circus, yet paradoxically both. A series of alluring vignettes from the inner-psyches of Seeta Patel, Kati Ylä-Hokkala and Sean Gandini: the joining of juggling and Bharatanatyam dance made perfect sense – as it had previously in the ballet-fusion of 8 x 8 Ephemeral Structures – both mediums here being mathematically complex algorithms combined with beauty and brains. Playful, knowing, transcending genres and cultures and broken up into bite-sized pieces that drew you in and made you smile, Sigma left me wanting more. 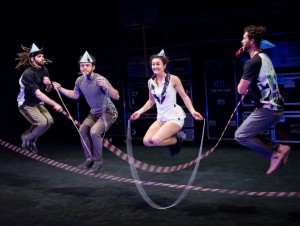 Flip Fabrique (also Assembly Hall) returned to the Fringe with Transit, their follow-up to last year’s hit, Attrape-Moi. It’s a gentle and intelligent work telling the tale of life on the road as a circus troupe, but far from being alienating or over self-referential, it succeeded in charming the audience with astonishing aerial and trampoline work – the latter a little over-familiar from other recent comparable work – but also some hugely original acro and (sheesh…) juggling sequences – one particular duet had the audience openly gasping. The detail in synchronicity was also awe-inspiringly good. 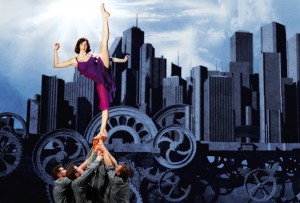 What is there to say about Cirque Eloize (Pleasance at Edinburgh International Conference Centre) that has not already been said? They are never less than spectacular and possess an ever-growing ensemble with some of the finest circus artists in the world. And for the first half hour of Cirkopolis  (based on Fritz Lang’s 1927 expressionist masterpiece Metropolis) the sense of relief at something so visually coherent and accomplished is palpable. Eloize seek to entertain, pure and simple, and there’s nowt wrong with that. They’re funny, they’re sexy, but sometimes you yearn for something which delves a little deeper. It’s hard to fault the routines, but what initially starts as a seamless homage to the film with a clear narrative eventually falls into a sequence of individual set pieces. Don’t get me wrong – it’s a stunning piece of work – but I yearn to see if they can explore and express a little more subtext and subtlety in the future. 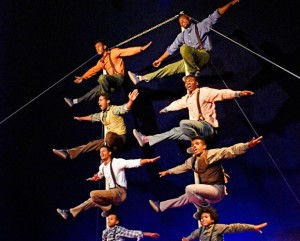 Finally, let’s go back to FUN. And this time it really was fun – Circus Abyssinia’s Ethiopian Dreams (Circus Hub) was dangerous (in the best and safest way), unashamedly playful and absolutely, unequivocally universal. Although it starts weakly with a cutesy attempt at a loose dreamy narrative, it quickly turns into one huge ensemble of festival frivolity for all the family. It doesn’t try to be contemporary or mainstream, it succeeds because it just is. Bibi and Bichu’s fine (and very young) ensemble elicited more whoops, cheers and standing ovations then I have seen in a long time.

ALBUM: Michael Jackson: Off the  Wall (for pure joyous escapism). 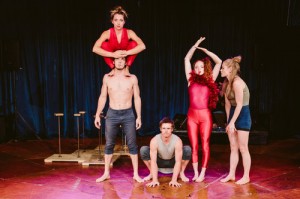 Oh, and shout outs obviously for the other three shortlisted shows already reviewed in the Total Theatre & Jacksons Lane Award for Circus – the worthy winner Fauna (Bjork: Vulnicura ); Ellie Dubois’ No Show (Death in Vegas: Satan’s Circus, mostly for the subtle use of the track Girls ); and Svalbard: All Genius All Idiot  (pretty much anything by Flaming Lips, but let’s go for the Dead Petz one with Miley Cyrus).

That’s all for another year. And the albums? Google them and knock yerself out…

Adrian Berry is artistic director of Jacksons Lane theatre in North London, supporters of the Total Theatre and Jacksons Lane Award for Circus at the Edinburgh Festival Fringe.

For more about the Total Theatre Awards see www.totaltheatrenetwork.org