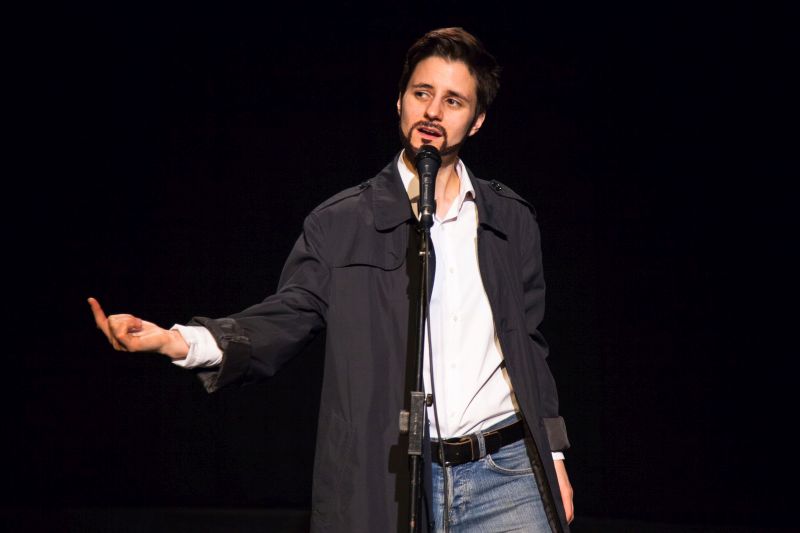 Jeepers creepers, where d’ya get those peepers? How they hypnotise…

Ira Brand’s latest show is all about looking. Looking at, through and beyond. Being looked at. And boy, are we looked at.

Having previously investigated health, ageing and fear, Ira, who is one third of producing company Forest Fringe (with Andy Field and Deborah Pearson) now turns her intense, intelligent gaze on identity and gender. It’s a great choice for the opening show of the Marlborough’s Queer Weekender, exploring female and male sexual desire in an hour of riveting, original theatre.

On stage, Ira, dressed Drag King style, preens her hair and sips her beer, then strolls louchely round the performance boundary marked in tape on the floor. She steps in, the music starts and launches into an expert lip-synching of Bruce Springsteen’s Fire before pulling up a chair to chat, in a cool Deborah Pearson-esque way, her tone level, legs wide, gaze strong. What she tells us is alarming: a sexual fantasy where the sex is ‘consensual, just.’ The man she screws in the underground carpark is the epitome of the self-possessed male, aware of his power as he looks around the bar, knowing he is being observed. For the men in the audience, there is an accusatory frisson here – are you that kind of man?

This sudden switch from entertainment to something far darker punctuates the work. Lights go up, there’s a song, lights go down, there’s a troubling encounter in an alley. Always the emphasis is on the eyes – she tries but fails to stare the teenager down – she shakes her head to suggest ‘no’ when she means yes. There is a terrifying build up of tension here, with language so vivid we can see the scene, feel the breath on her face.

We meet Ollie, a graphic designer. He is shy, diffident, he worships Springsteen – ‘those massive arms’ – and after a bit of banter with the audience, he breaks free to dance like a demon. We have heard the choreographic instructions in a voiceover; they sound strangely like moves a woman would make rather than Bruce. Ollie totally nails it, though in his soul he will always be dancing in the dark.

Break Yourself is an investigation of gender and desire, male power and masculinity, fan-dom and performance, that is both disconcerting and thrilling to watch. There are several modes of conduct at play, provided in part by the voiceovers, which serve as a way into the construction of Ira’s role. She is told to ‘gulp, not sip’; ‘don’t look so eager’ to convince as a man. She relishes her achievements: ‘you are exactly how I imagined you.’ The lighting marks the mood changes, reflecting off a wall of white squares. We are fully aware of the acting going on, and totally suckered by it. If this all sounds a bit heavy, it’s not without wit and a sly knowledge of its own ridiculous moments. The prevalence of the male gaze that dominates so much of our culture and society is skewered by the use of Bruce Springsteen, the good guy, as its symbol. A final, beautifully choreographed dance starts seated and ends in triumphant, electric guitar twanging, rock-god mode, upright, ‘big’ arms aloft, legs wide, to wild stadium applause.

Whoever is broken here, be it Ira, Ollie, Bruce, the dominant male, the questing female, or the audience’s expectations, it’s been a magnificent rupture.