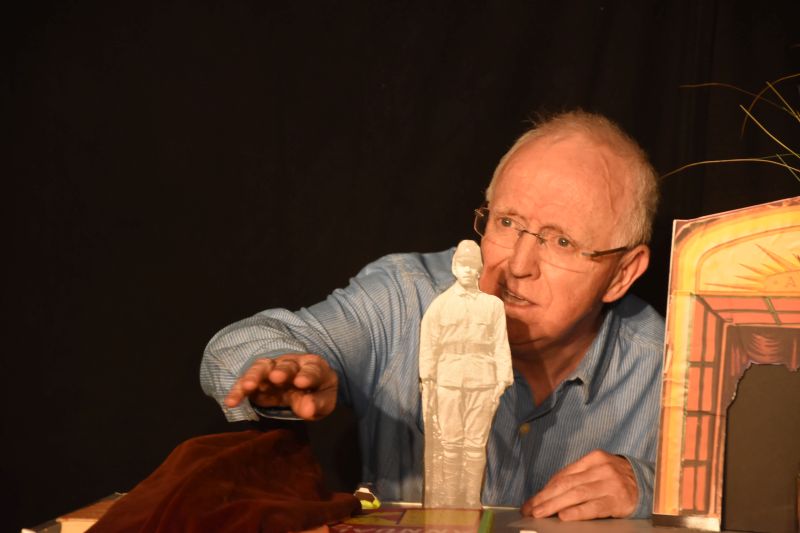 If keeping a secret can corrode the soul, and revealing it liberate, Patrick Sandford must feel a sense of scorching release on performing Groomed to a paying audience for the first time.

His story of sexual abuse at the age of 10 by a manipulative but respected teacher, is not easy viewing, but is tempered by using a range of perspectives, including that of the abuser, plus the musical punctuation of on-stage of saxophonist, Tomm Coles.

Simply staged, with a table of props – toy theatre prominent – and a bunch of balloons, Patrick opens the play with vivid dramatization of scenes from his early life. Slightly impish in manner and confident in tone, he theorizes about guilt, desire, pain, and anger with heartfelt passion in language both robust and poetic. We can feel his anguish when he is held under the school-room table, eyes fixed on the grain of the wood. Given the intimacy and heat of the makeshift theatre space, we could be under it with him.

Groomed explores how a truth can be told, a secret be spoken, and how we erect barriers for shelter. Patrick used theatre as sanctuary; there he could hide behind character, find catharsis in a fictional rage. When the Japanese soldier Hiro Onoda was eventually located in the Philippines jungle, having unnecessarily held a military position for nearly thirty years, he was treated with consideration and generosity by his country. The inventor of the saxophone, Adolfe Sax, struggled through an alarming amount of injuries and business calamities but created an instrument of lasting value and immense musical power. Their experiences provide a counterpoint to Patrick’s story and allow him to reflect on decades of unnecessary defending and celebrate his own creative achievements.

There is ambivalence in the way the play is delivered, with switches from first to third person narrative, from violent anger to comic asides, that make for a rather disjointed emotional journey. Lines such as “I was living beside, not in my life” would be even more powerful if spoken straight to us, and an on-stage relationship between Patrick and Tomm could be established earlier. Further performances will no doubt iron these things out. A larger auditorium would enable Nancy Meckler’s direction to have proper impact, with movement influencing pace.

While Groomed doesn’t break new ground in terms of theatrical form, it’s an intelligent and well constructed approach to a story that, sadly, is only too common right now. Generously supported by the charity Mankind, the play works towards opening up dialogue and relinquishing blame in order to change and heal. It does this successfully, without shifting into theatre as therapy, leaving the audience thoughtful and richer for the shared experience.