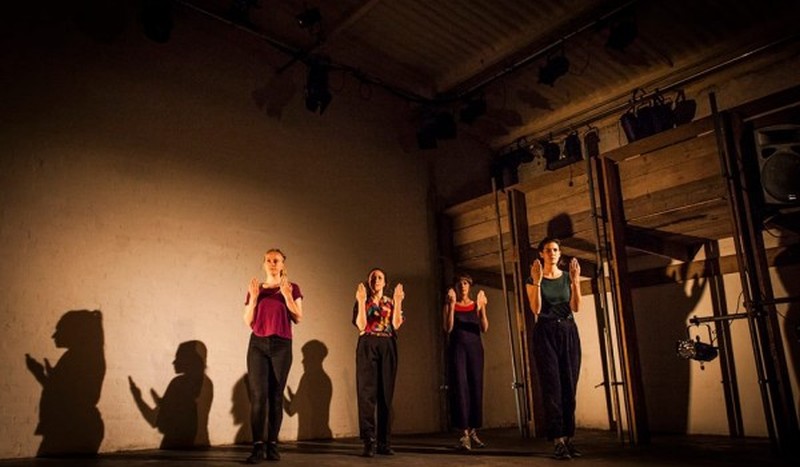 The Yard Theatre’s annual festival for contemporary theatre, NOW, runs a weekly programme showing a new double bill each week for five weeks. This gives artists time to develop work via repeat performances and to firmly establish a relationship with the theatre, the site, and their paired artist. This year, Week 1 opens with WISHBONE, created by Laura Burns in collaboration with Jo Blake Cave, Jo Hellier and Simone Kenyon, followed by Ritual for Change by Emma Frankland.

In WISHBONE the four women on stage use voice, text, and an illustrative movement vocabulary to process thoughts around and embody animals and materials that could have formed part of their previous lives. The piece is clearly structured into sections so that the audience can anticipate it evolving. A minimal group section breaks out into individual explorations with speech and either object play or dancing to accompany them. A final group oral section, first of dialogue and then of extended notes, calls, or harmonies, brings the work to a hiatus which feels spiritual, magical, and all-encompassing.

Four monumental figures stand tall, edging between swaying and rocking on the cusp of momentum. Their eyes occasionally sparkle, their expressions are of intent, subtle excitement, and anticipation. Changes in posture or focus and gradual coos and hoots pique the overriding sense of stillness and quiet. This first section cleverly strikes a balance that highlights silence and sound, the individual and the flock, the human and the abstracted, the woman and the creature.

Laura Burns’ solo is an accumulation and articulation of both thoughts and movement. An inquiry into her past lives manifests in short phrases of speech and movement repeated and extended. She is articulating, thinking and expressing an attempt to define who we are, what we are made of, and where we came from. Mimicking a rhythm of thought streaming and reoccurring, her speech is assertive with a sense of poetic urgency. Trying to ‘get under the horizon line,’ ‘underneath the London clay,’ she is physically pulling at a thread that she can see but not grasp, that links the centre of the earth to us in the here and now. Her gestures are as fine as feathers but with strength in their dynamics. Pats, slides, catches, and tremors lead from the tips of her fingers as Burns grabs at something invisible, making something indefinable almost tangible. Her style is something quite unique and individual within the group and this section parallels the piece as a whole, it is a process, an accumulation, an awareness of not quite knowing.

A later section sees each performer complete the sentence ‘and underneath that’ over and over in differing ways, digging us deeper and deeper. It connects the silly and scientific, memories and facts, a biography of time and place. As their speech becomes faster, louder, and enthused with unconstrained thrill, the group jump over and over as the energy and tension builds into an eruption of sound. They feel like they are actually going to take off like a rocket as the sound vibrates through our bodies and the intensity implodes, this feels amazing, I am giggling along with them. The binding feature of this piece is its soundscape, created by the performers’ tuneful voices, speech, and an abstract recording. It is gently layered with different types of noises and notes and builds to high volumes and disorientating intensities and falls to silence. It is gentle, melodic and airy with ebbing and flowing repetition punctuated by staccato surprises. These sounds feel like a language, a call, but not completely human or completely animal. They express the embodiment of creatures of past lives and they speak directly to the audience. WISHBONE works, it carries its audience through its highlights and climaxes and it interrogates and questions with thoughtful and intellectual vigour. The team of four independent women conjure up an energy that actually feels like it comes from the centre of the earth that they describe: it bubbles and simmers and emanates via sound to our very cores making a piece that is spiritual and cerebral.

Rituals for Change is performed by Frankland who made the piece in collaboration with Eilidh Macaskill and Myriddin Wannell. A transformative use of objects is at its core which describes and illustrates a process of change, exploring the indefinable nature of being transgender. The space is dressed with a central pile of earth supporting an axe and woodblock. Individually made clay pots, a record player, a set of bowls, plaster, and a pile of metal scaffolds surround the bed of earth. Each object is an ingredient or a tool, integral to the mix that transforms Frankland’s identity and her surroundings.

Frankland inhabits a haven of bits and pieces which she organises and uses like a chef in their kitchen, or an artist in their workshop. The set is a combination of an installation and a home, and the objects are constantly being used, moved and replaced throughout the performance.  A bird’s eye projection displays the artist-cum-alchemist’s work on the backdrop behind as this world grounded in garden earth expands higher, as a scaffold tower representing ‘radical change’ is constructed. This evolving set parallels Frankland’s narrative of change: it expands, as does her horizon, her vision, and our own minds.

The theme of making, particularly of moulding clay, stems from Frankland learning how to throw pots at the same time as beginning to take the oestrogen pill. Ingredients such as water, find their way around the set and in speech, linking our bodies, ‘we who are water,’ to each other and the earth. A bag of water is hung on the tower, punctured and collected into a bowl. It is used in two smaller bowls to mix with the earth and mimic a dripping, not quite solid, layer of breasts. It is later used to make a tangible, malleable layer of clay breasts that Frankland sculpts around her own growing chest. This transformative process works by its steady division into mini rituals that prepare space, object, and body for the next step.

Well-used exercises in the creative process such as completing the phrase ‘we are…’ and ‘you will…’ form a simple and effective text-based structure and allow the audience to focus on reflecting on the visual metaphors created by the manipulation of objects. The speech works best when it is conversational or when jokes are shared between Frankland and the audience. This relaxed style could be applied to the narrative which often feels laboured or over emphasised on its subject of an individual’s mental and physical change as they take the oestrogen pill. Although autobiographical, it appeals to everyman by placing the audience as those who are outsiders judging her own identity and more accessibly as those who have experienced growth and change themselves.  It is beautiful in its frank honesty, organised mess, and the dirty concoction of ingredients, with an overall ambience in a state of flux like its creator.

Both WISHBONE and Rituals for Change make a strong start to a meaty line up of works for NOW 16. Their concerns with the social and philosophical context of their subject matter and their manipulation of object, text and voice are sophisticated examples of multidisciplinary performance.