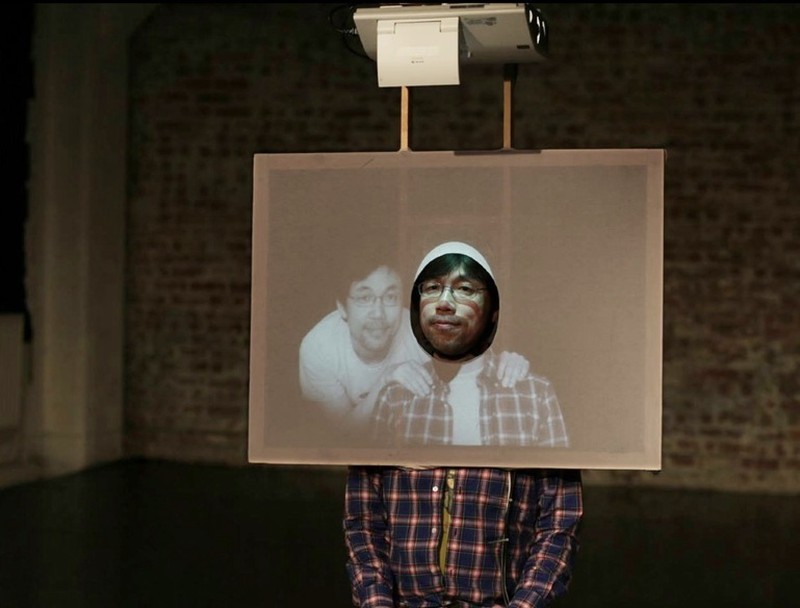 This is a refreshingly accessible live art work that is by turns amusing, intriguing, and oddly moving. It is constructed in two halves, with the quirky charm of the first setting up a quite ingenious formal / conceptual twist that delivers us back to the starting point in a highly satisfying way.

The solo performer, Iriguchi, calling himself 4D Cinema, opens with a discussion of time travel, the fourth dimension, and the medium of film. He then straps himself into a wearable contraption whereby his face appears through a hole in the centre of a screen, above which a projector is mounted. There follows a range of amusing and well-timed sequences in which his live face and body interact with pre-recorded video to take us on an eccentric journey around the life of Marlene Dietrich.

Many of the details of Dietrich’s life turn out to be quite surprising, and there are some odd moments of singing played backwards, but these peculiarities seem to be in keeping with the quirky feel of the piece. What happens in the second half, however, reveals them to be very cleverly constructed footholds on the route back to the beginning. It’s kind of like a homemade, avant-garde thriller that first ties a weird and eccentric knot and them unravels it in ways you really weren’t expecting.

The programme notes describe the piece as exploring themes and issues around gender and representation, and one could certainly draw out rich layers of interpretation around these themes if so inclined. For me, however, the most rewarding aspect is the piece’s ability to deliver layer upon layer of complexity within the structure itself. It lulls you into thinking you’re watching an amiable nerd, before revealing that it’s a deeply considered and finely crafted exploration of the live/video format. I really can’t be more specific without ruining the surprises for those intending to see it. I can say that this is a highly original and unpretentious work that leads to an increasingly engrossing experience due to its exquisitely clever symmetry.