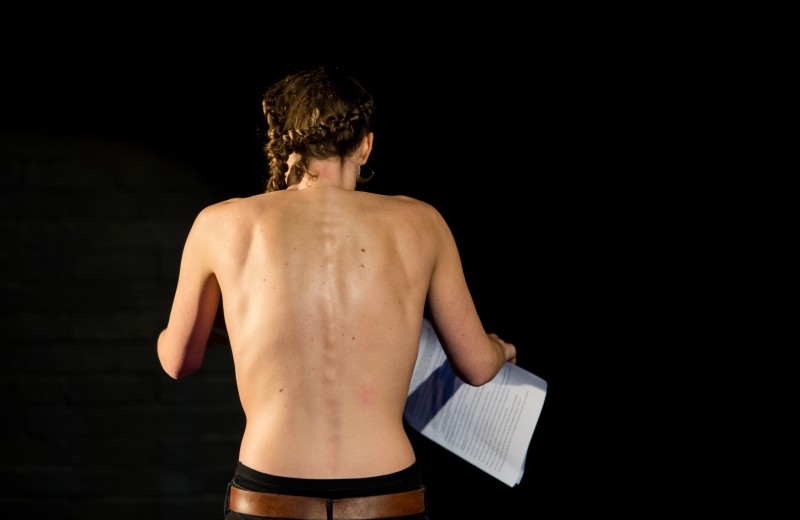 Hardy Animal is a new performance by Bristol-based dance artist Laura Dannequin. Described as ‘A tender solo that looks at chronic pain and human resilience,’ Dannequin takes us on a journey through her experiences of chronic back pain and its effects on her life as a dancer.

We begin in the dark as Laura tells us about the show she wanted to make, the dances she wanted to perform for us tonight. She speaks into a microphone and though we can’t see her, we know she is there, occupying the stage. Letting us picture all the dances, all the possibilities. We begin with an understanding that we will not see these dances tonight; we feel loss before we’ve even got going.

It’s a challenging way to start, especially once we see Laura stand, centre stage. This is a piece where the performer is going to do all the work – there is no set, no projection. A dancer, still, with all the potential energy and the learned ability honed over years; but she’s not going to do the sadly beautiful dance, or the beautifully sad dance. She’s going to stand here. She’s going to talk to us.

The text is considered and often witty, the choices bold. She is exposed. She is staring us down, standing her ground. There is a feeling of taking control throughout the piece – of a decision to own one’s limitations.

A long list of attempts – of possible cures, of promises from doctors, chiropractors, masseuses, of self-help books and failed tactics – dominates the show, and at points I struggle with this. While I understand the necessity of communicating the scale and determination to solve this, my mind wanders during this list and I am relieved when we arrive at other material. Dannequin’s performance is strong enough that I understand the frustration and rage of her condition without needing this proof.

She asks us to try to understand chronic pain as its own problem, separate from pain that occurs from injury. The psychological connections between what we do with our body, and the chemical release of pain. We learn about an experiment where the fingers of a group of violinists and a group of people who don’t rely on their hands so much are pricked with a pin; of the violinists feeling much more pain, of the pain lasting for longer. As someone who also relies on their body to make performance it’s difficult and it’s confusing. It gets me in the gut.

Dannequin’s small choreographies throughout are mesmerising and communicate to us with the smallest of movements. The flexing of her bare back: the seat of her pain, strikes me particularly, likewise a hand gesture that slowly takes control of her arm, eventually attacking her face. There is something powerful about her control in the face of this pain – her skill as a dancer vs the disablement of her tool.

The piece closes with an extraordinary dance. A trained body, measured and powerful, but struggling. The movement feels like all of the dances proposed at the beginning and yet it is none of them. It is a specific dance, a fitting dance, a dance of loss and a dance of ownership.

It would have been easy not to dance, it would have been an obvious decision: to make a piece exploring the loss of this, and to lose it, within the show. But this isn’t just about loss – it’s about wanting to carry on and trying to find a way to win. We have to consider what it means to give over control, and to take it back.

Forthcoming performances of Hardy Animal:
29 July at The Place, London
13–17 August at Forest Fringe: Out of the Blue Drill Hall, Edinburgh