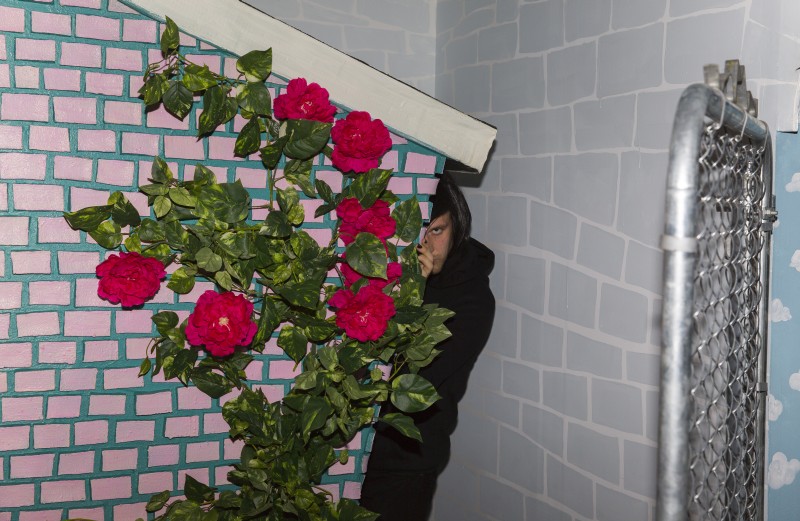 A blacked out window of a shopfront in the trendy Echo Park area of Los Angeles stands in front of me. The words ‘RETURN TO FOREVER HOSUE’ have been pasted to the window. I wait outside, six others wander up, and we begin to tentatively talk to each other – How did you hear about the show? Have you ever done a locked room before? We’re going to have to work together…

A man arrives, we’re briefed (the fire extinguisher is the only thing that’s not a prop – we should use it if there is an actual fire!), and we’re ushered into a pitch black space. I touch the walls – soft and furry… A voice emerges from behind us and a giant mouth appears in the black, furry wall. The mouth tells us the sad tale of Forever House – a glorious TV show that was cancelled, trapping its characters inside this building for all time. And that’s where we come in – it’s our job to help release them.

We sneak through a dark tunnel into more blackness. The lights flash on in an instant and we find ourselves in a light grey box room. The fenced gate is slammed shut behind us, we’re padlocked in. Our team rush for clues – a small pink sofa reveals a mouth with hidden treasures under the cushions, we pad the walls searching for a magic doorway… and the lights go out again.

It would be remiss to reveal the details of our escape route tactics; the performative game relies on us discovering as we go linking clues to keys and characters’ needs to opportunities to gain more keys. The Machine Project team, led by Patrick Michael Ballard, have created a wickedly funny and brilliantly crafted game. We meet a series of surreal characters through holes in the wall – low and high – in the ceiling, and through hidden doors. Pushing a ball through a hall erupts another appearance and more clues; we pull roses out of the wall and drink the sacred tea that will reveal the ‘true’ secrets.

It’s as absurd as it is complex; like a mix between Sesame Street, The Crystal Maze and a Dali painting. The puppets are performed with precision and humour – I’m still puzzling as to how many performers there actually are. Mad-capped and offbeat, it’s a treat worth searching out if you find yourself in the city of angels.