Dorothy Max Prior sees Project O twice in two weeks: their first work, O, was presented at the Marlborough Brighton, whilst latest work Voodoo premiered at Chelsea Theatre as part of the Sacred season

Zebra Katz’ Ima Read blares out, and two figures on all fours – androgynous, anonymous, head-to-toe in black – work their rear ends back and forth. Ima read that bitch. Beneath them is a pink fake-fur rug. Yoga for the modern girl. The rug is pulled out to reveal a ‘mat’ of books. Proof-read that bitch. Simone de Beauvoir. Germaine Greer. The March of the Women: A Revisionist Analysis of the Campaign for Women’s Suffrage. The books are kicked across the floor towards us. Gonna take that bitch to college. 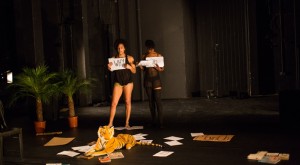 The black garments are removed, the bodies revealed. Female bodies. A dark brown-black body. A lighter brown mixed-race body. I mention this because they do – Project O I mean, in their publicity material for the show: O is a dance duet about ‘being female, black, and mixed’.

Over 50 exhilarating minutes they explore, celebrate and subvert every cliche imaginable of the black/mixed female body. Luxuriant vanilla-dressed tresses. Afro curls. Shaved heads. Covered heads. Veiled faces with smouldering harem eyes. Strong and sporty in black lycra vest and shorts as Grace Jones’ Walking in the Rain plays out. Go-go dancing wildly in pink and red nylon wigs. Twerking against the back wall, topless in lurex hot pants. Lap dancing amongst the audience. Or lap sitting, anyway. Various people are silently pulled in to the stage action. They sit and watch, they help to ‘black up’ the dancers’ bodies, they get invited into the dance… The performance space is filled with boogie-on-down-ing bodies. 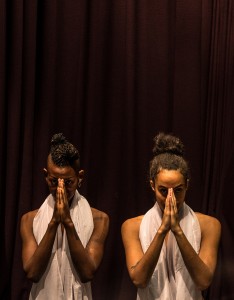 Two weeks later I’m at Chelsea Theatre for the Sacred season – the premiere of a new show by Project O, Voodoo. Which also invites its audience into the dance, but is a slower, cooler affair. Voodoo explores time, which is waiting in the wings. It speaks of many things. ‘If all time is eternally present,’ said TS Eliot, ‘all time is unredeemable.’ There is no point in speculating on what could have been, because it couldn’t. Have been, I mean. I paraphrase. Eliot said it more eloquently… The Four Quartets is quoted by Project O in their programme notes; Eliot’s reflection on the nature of time – his last major published work before his death, and the catalyst to winning the Nobel Prize, informing the content of the show (we presume).

As we enter the theatre space and take our seats, we are watched by two tall still figures dressed in long white gowns, standing quietly before an opaque screen made of thin black material. A relentless roll of facts and dates scrolls down the screen. Malcolm X murdered. The Millennium Bug. Jamila’s mum caught in the Brixton Riots. The words are faint, greenish white traces, a little difficult to read.

The ghosts of past persecutions, present realities, and future possibilities are embodied in these two figures who are both themselves and all of us, simultaneously. They move slowly towards the people in the auditorium, gently touching, burying heads in shoulders. They retreat behind the screen, which continues in its relentless scroll of facts and figures, and emerge carrying great bunches of black balloons, held aloft. Happy birthday. Happy deathday. In memory of.

One figure takes to the decks, DJs, the other dances. We’re invited into the dance, verbally, through the mic, over the PA. But they are in the performance space and we are sitting in theatre seats, so the take-up is a little slow at first. Just one man joins them and dances. We watch. They stay cool, calm and collected. The invitation is repeated, and there is a sudden movement of bodies as many of us leave our seats to ‘lay down our defences and dance’.

Eventually, the door opens. We are invited to leave, and new people arrive. This is a four-hour long piece, but we don’t get to see how the next three hours play out – although perhaps if we really wanted to, we could?

It is interesting to reflect on the difference between these two works, seen within a fortnight of each other. O is an established piece – the first ‘conversation’ made by Alexandrina Hemsley and Jamila Johnson-Small. And although there is a serious intention – to highlight the assumptions made about the gendered body, the body of colour –  it is nevertheless a feel-good piece, full of joy and humour, and bursting with fabulous and fun dance routines. There’s no getting away from it – it’s a romp.

Voodoo is brand new, and presents itself cautiously. It’s subtler, more nuanced. The  dialogue between the two women is harder to break in on, the intention harder to unravel. Why have they chosen these particular historical happenings, these points in time, to highlight on screen? What is this slow and measured physical contact with some audience members about? Why are we being asked to dance with them at the end of the hour? Joining up the dots feels more difficult here – although I am happy to just allow it all to seep into me, without feeling that I completely understand. ‘Allow but a little consciousness. To be conscious is not to be in time.’

Project O describe Voodoo as a work of science fiction. And as we know, SF is always about our present realities, it just purports to be about the future. Or an imagined past. Or a parallel universe present time. A time that cannot exist, or cannot have existed.  There is only now: ’Here, now, always’. Thanks TS. Amen. 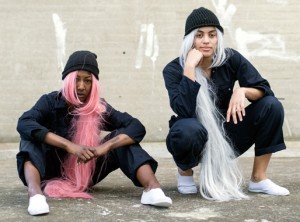 Project O: O was seen at the Marlborough Theatre Brighton on 4 November 2015.

Voodoo was seen at Chelsea Theatre Sacred season on 17 November 2015.