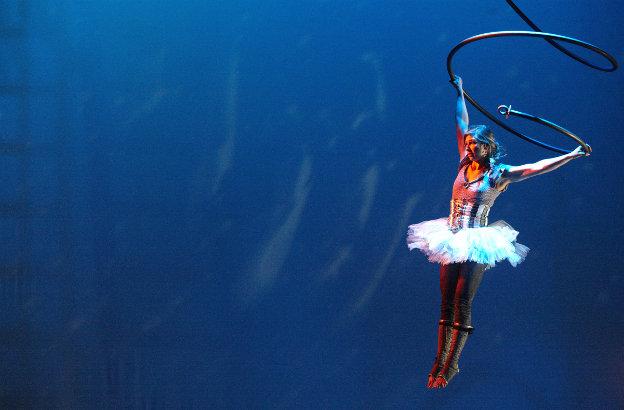 At LIMF this year NoFit State Circus – known more usually for their large-scale tented productions Immortal and tabú – bring us Mundo Paralelo, a show for proscenium arch theatres directed by circus novice Mladen Materic, the Serbian director of Theatre Tattoo, and performed by a troupe of eleven international performers. Mundo Paralelo translates as ‘parallel world’, and in his direction Materic challenged the performers to find new ways to connect with their audiences while at the same time inviting the audience to explore the intersection between the parallel worlds of circus and theatre. The result is a form of circus reinvented for a brick-walled environ, a dreamy, very muted and sombre circus, laced through with beautiful music (in a kind of Goran Bregović & Emir Kusturica style, gorgeous and heartstring-pulling) and shot through with a French style of abstract visual theatre.

So, commencing with lights on in the auditorium, the performers come on stage, like they’re just setting up for a days rehearsal. Lights go down on the audience, and the stage lights come up… the world of make believe meets the real world. Near impossible feats of human skill become the norm. It’s quite a disparate band of performers. The programme notes say that ‘the Angelics help the Humans transcend the boundaries of the physical world’ yet who is angelic and who is mortal is never clear. There’s a woman on a rope and a man on a ladder trying to attain her; a top hatted man, who we presume must be the ringmaster comes by on a Penny Farthing bicycle; there’s a knitting lady and tank-top wearing bloke being clumsy to accordion music; and a joyous flying trapeze piece at the end – yet much of this show literally feels ‘clunky’. A low tightwire is threaded through a spectacular looking metal ‘S’ curved like a double skipping rope, which you expect to be used to dramatic effect, but which isn’t – and this isn’t the only example of redundancy. The show has a lot of rigging and equipment, yet the pieces that used the kit weren’t as memorable nor as enchanting as the simpler scenes – such as the unerring three-ball juggling of a quietly acrobatic Frida Odden Brinkman, or the wonderful comic trapdoor ‘slapstick’ where white balls pop up from below stage to the puzzlement of a befuddled circus fellow. I was glad I was sitting close enough to enjoy such delicate play as a lovelorn routine where a chap vied for the attentions of a sulking aerialist by enchanting her with his ability to turn water from a glass into crystal contact balls – a beautiful, dexterous and tender scene, yet one that must have been far too small to have been visible for the audience at the back of the vast Queen Elizabeth Hall.

Mundo Paralelo leaves you feeling rather puzzled and wanting something more – not in terms of spectacle; just more of a conclusion or development for some of the scenes, and a bit more rhyme or reason to some of the equipment. Yet the beautiful dexterous and tender moments remain vivid, carried along by music that I could have listened to for the rest of the day.