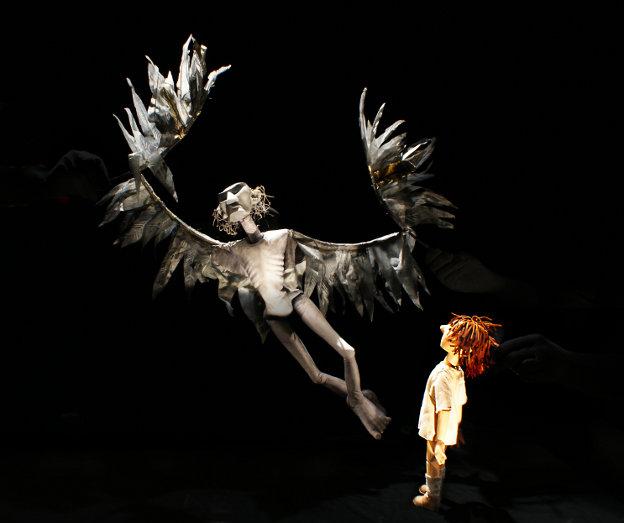 Is it a bird? Is it a plane? No, it’s A Very Old Man with Enormous Wings – he’s come from who-knows-where and he’s landed in someone’s backyard in a small village somewhere-or-other, causing quite a flurry. What is he exactly, chicken man or stargazer? The locals divide up into those who consider him to be an angel, singing ‘Bring him wine and bring him bread / Let him sleep in a feather bed’, and those who think he’s a devil, to be kept on a chain in a backyard cage and fed potato peelings. An uneasy compromise ensues: he’s kept chained up, but ‘allowed’ to receive visitors, who with a mere touch of a wing are cured of their odd ailments – visitors such as Bernardo the Back-to-Front man who ‘had his head turned by a woman’, a poor unfortunate who ‘cannot sleep for the noise of the stars’, and an old misery-guts who finds herself tickled back to merriment with a feather. So many people are now coming from far and wide to seek a miracle cure that the villagers are starting to charge for services, making a pretty penny out of it all. It’s not long before the church poke their nose in, and ‘Lo, here comes Father Gonzalo’ with his three tests of angelhood, which of course our Very Old Man fails (divinity is never too keen on being tested). Watching all of the goings-on is the village gossip who peers out from her window, providing us with explanations and commentary, and just occasionally stepping out of the action, as in the end of the first act when she announces, ‘Interval! I’m going for a pee!’

Based on a short story by Gabriel García Márquez, a version of A Very Old Man With Enormous Wings was first staged by Kneehigh many years ago on a clifftop in Cornwall. Director Mike Shepherd has retained his fascination with the story, and this time round teamed up with the Little Angel’s Wright family – puppet-maker and designer extraordinaire Lyndie Wright, ultra-talented puppeteer-performer Sarah Wright, and internationally acclaimed film-maker Joe Wright – to retell the tale using a fantastic array of puppets of all shapes, sizes and forms. I hear tell there are over a hundred puppets featured in the production, from the army of scuttling crabs that invade the stage at the beginning, to groups of villagers (cleverly mounted on boards, so they can be manipulated four or more at a time), to individual characters (those with strange ailments particularly lovely – a back-to-front man is a puppeteer’s gift!). Then there’s the Old Man himself – a beautifully realised magical being, scrawny and crow-like in stillness, looking like little more than a cage full of old bones and feathers, yet when he lifts his head and spreads his wings, a beautiful black angel embracing the world.

Lyndie Wright’s set design is perfect for the story, a multi-levelled affair allowing for ground action (the yard with the caged creature being the central focus for the first act), window action in the ‘buildings’ to each side, little stage-thrusts left and right (allowing for individual characters to move into more intimate relationship with the audience as needed), and up high a representation of distant hills and roads, animated by little bicycles and buses whizzing to and from the village. In the second half, the auditorium is drawn into the stage action, the audience embroiled in the plans to welcome a dignitary from afar to the village: ‘Glad to see you’ve dressed for the occasion,’ says one of the puppeteers to me, and ‘Would you kindly hold this?’ to my companion as a string of bunting gets pulled across our heads.

It goes without saying that the puppetry skills are top-notch – this is a Little Angel production after all – and for much of the show my critic’s hat is knocked off as I sit in child-like wonder, often forgetting that the puppeteers even exist, especially in the sections in which they are out of sight or in low-key visibility mode. Yet at other points, the puppeteers are very much performers too – singing, interacting with their puppets, engaging us in the action. It’s a clever mix.

Like many traditional fairy tales, this relatively modern one introduces us to archetypal characters that have specific relevance to our own time and place – the dogmatic and inflexible priest who turns out to be corruptible and is literally defrocked (a moment that causes an uproar of hilarity for the feisty ‘special schools’ audience in that day), the avaricious banker who eventually swells so much he pops, the innocent child who believes, et al. At the heart of the story are questions of faith, trust, love, and attitude to ‘otherness’. A tale for our times – and for every time and every place, as essentially what’s in the cage being poked and prodded is our very humanity.

Ultimately, what’s most wonderful about the show is that it manages to combine the best of Keneehigh with the best of The Little Angel Theatre. Which is what you’d have hoped for in the collaboration, but to see it realised so beautifully is a joyous thing.