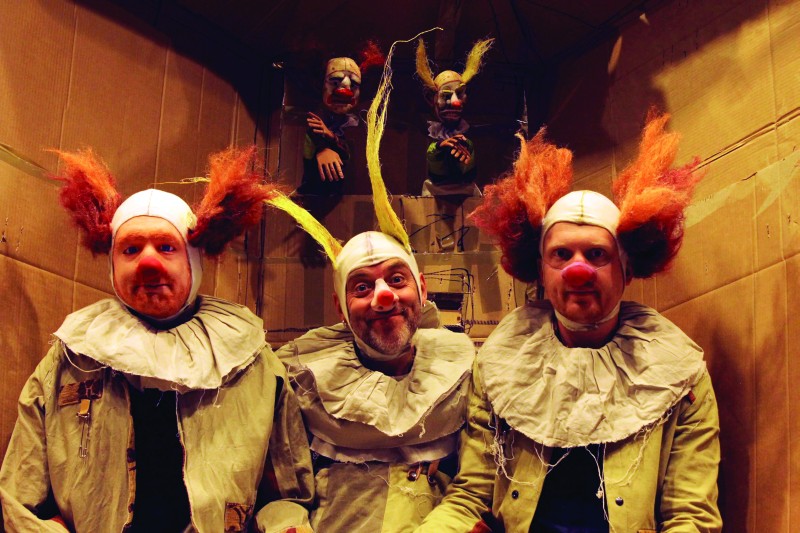 Dik Downey and Adam Blake look pretty much how we expect clowns to look, with over-sized trousers, too-big boots, red noses, and hair as if they’ve just stuck their fingers in a plug socket. And to begin with, they behave pretty much as we expect clowns to behave: all silly walks, happy-sad faces, and roping the audience in to playing squeaky-toy orchestra.

But then it starts to get weird. Not creepy-weird but meta-theatrical-weird. When Adam shines a torch into his face and adopts an evil grin, Dik accuses him of having crossed the line and strayed into scary-clown territory. Dik and Adam, we soon realise, don’t really know what they’re doing, and heading through the doorframe to ‘backstage’ (we can still see them, although Dik insists we can’t) to consult the script is only intermittently helpful. Not only this, but their very existence is subject to the whim of their foul-mouthed and sadistic boss, Poco, the archetypal ‘scary clown’, who exerts a puppet-master’s control over the pair, sending them into a hilarious, dark and dirty dance routine whenever they undermine his authority. Unsurprisingly, they want out.

Throughout, the show gleefully subverts our expectations of clowns and puppets and plays fast and loose with the boundaries of its theatrical world. There’s palpable relish in seeing what it’s possible to get away with, how far they’ll go and how far we’ll go with them. Pretty far, it turns out. We’re easily roped in to service their games and plots, whether that’s being romanced by a love-struck Adam or, in the case of the man sitting in the row in front of me, having shoes and socks forcibly removed by Dik so that he can demonstrate sock puppets. It’s joyfully anarchic.

At the heart of the show are two hugely generous and skilful performances, full of wit and vulnerability.  Dik’s clown is at once naive and indignant, Adam’s by turns wistful and sardonic. They’re an endlessly watchable double act, manifesting all the unhealthily intense affection and antagonism of a codependent relationship.

Coulrophobics (those who fear clowns, of course) have nothing to fear: the pair’s subjugation by Poco is intriguing and bizarre rather than genuinely menacing, though a little more threat here might help propel the piece forward: their desperation to escape only really becomes apparent as a driver in the latter third of the show, when their failure to outwit Poco results in the ultimate humiliation (there is a warning in advance that the show contains full frontal nudity).

It’s sublimely entertaining and thoroughly deserved the extended applause it received from its full house, setting the bar high at the start of Bristol Puppetry Festival – a programme that asks us to expect the unexpected and consistently challenges what visual theatre is.