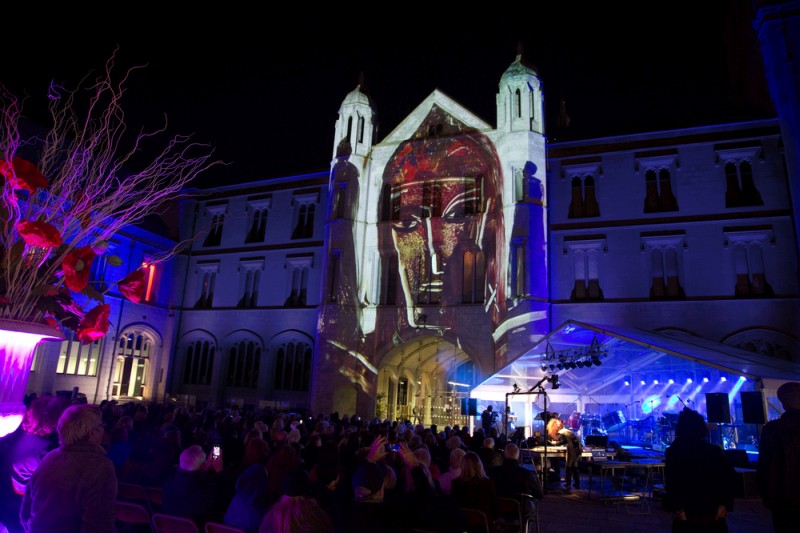 I was fortunate to catch the final twenty-five minutes of Aurora Nova’s large scale show in the ‘Hogwarts’ school quad. The location is superb. Tucked behind the vast gothic buildings, it is an enclosed square with a dominant tower and corner staircases heading spookily upwards.

There is a sense of awe and hush from the eighty or so people standing or sitting here. Some stroll about, others just stare. They are looking at an enormous colourful painting being projected onto the crenellated wall, textural and splashy, forming into human and animal shapes, becoming abstract, being swept or sponged away. The hands doing this belong to Russian artist Maria Rud who has a big smile and flaming red hair. Maria is responding to a percussive score being played by virtuoso musician Evelyn Glennie, who bounces around a large set of instruments with vigour and panache.

The imagery is very Russian and has a religious flavour. Is that Ivan The Terrible? It’s an illustrative style reminiscent of 1950s children’s books on ancient history, all earthy colours and patterning. The scenes are choreographed to fit the shape of the architecture by projection artist Ross Ashton.

The finale is a solo for gong, with Glennie on her knees in the centre of the façade, very slowly building up resonance as the painting swirls around and over her. The sound of the castle fireworks bounces off the quad walls as the gong gets louder and Maria works and reworks her final image.

AniMotion is a proper festival event; accessible, interesting, beautifully performed, and providing a good thump of emotional impact. You may only want to see it once, as the images, if not the music, are pretty exactly repeated each night, but you certainly won’t forget it.