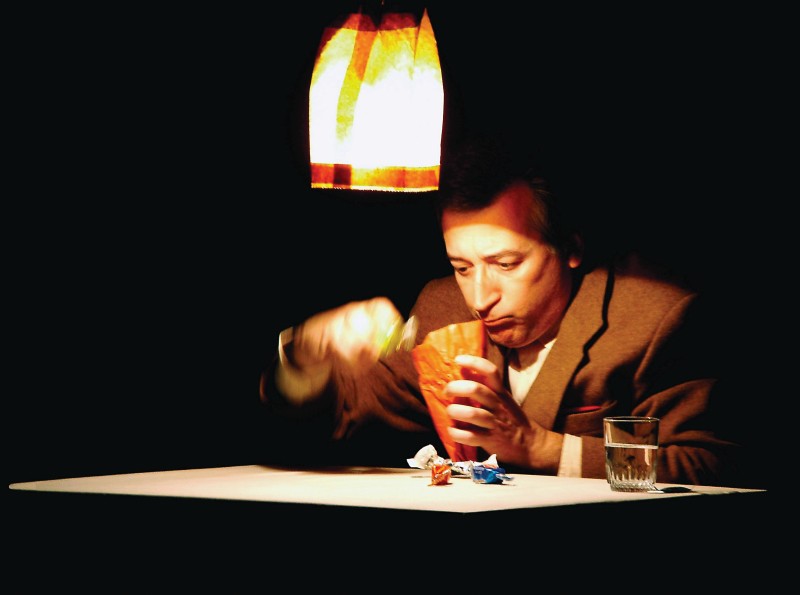 Almost without being noticed, an unassuming elderly man crosses the stage and starts addressing us in a thickly evocative Spanish accent. Carles Cañellas tells us that Small Suicides was made in 1984, that he saw it performed by its Hungarian creator, Gulya Molnàr, several times, and that Molnàr gave him permission to take it on. While he’s talking, he removes his jacket and shoes carefully and deliberately and puts on another pair of shoes and another jacket. It’s considered, precise, the objects telling the story with him: Cañellas literally steps into Molnàr’s shoes. It’s a lovely way of framing this charming and eccentric piece of performance-philosophy, priming us for a show concerned with mutable identities and what it means to take on a life.

In Cañellas’s hands, everyday consumables are animated in such a way that they express something essential about themselves. Less puppeteer and more enabler, Cañellas gives voice to the objects with chirrups and mutters, his mobile features child-like with mischief and delight as their stories play out. A match falls in love with a coffee bean. An Alka-Seltzer tries to pass itself off as confectionery. In each case, the very use which defines the item is the inevitable means of its self-destruction: the match is lit, the Alka-Seltzer dissolved. It’s ingenious and absorbing.

The show isn’t best served by its presentation in the Tobacco Factory theatre, where its physical smallness, upon the full appreciation of which a lot of the subtlety of its ideas depends, is problematic rather than eloquent. The majority of the performance takes place on a table top, illuminated by a single bulb shaded with a brown paper bag, and from the sixth row I was squinting. But it’s not just what you can see: what you can hear – the crunch of peanut shells, the rip of the struck match, rustle of sweet wrappers, fizz of water, the sounds of real things happening in the lives and deaths of the animated consumables – is essential, and at times was lost.

The show did stay with me in a surprising and sweet way, however. When I got home and set about preparing a snack, I was peculiarly conscious of things that I’d ordinarily take for granted, like the way a teabag reacts to being doused in boiling water as if it’s been scalded, or the way blueberries in a bowl jiggle when they’re being rinsed under a running tap in a way that only blueberries do. Everyday objects seemed animate with the very uniqueness of their own life forces. Small Suicides had shifted in a tiny way how I experienced the world, and for that I was grateful.