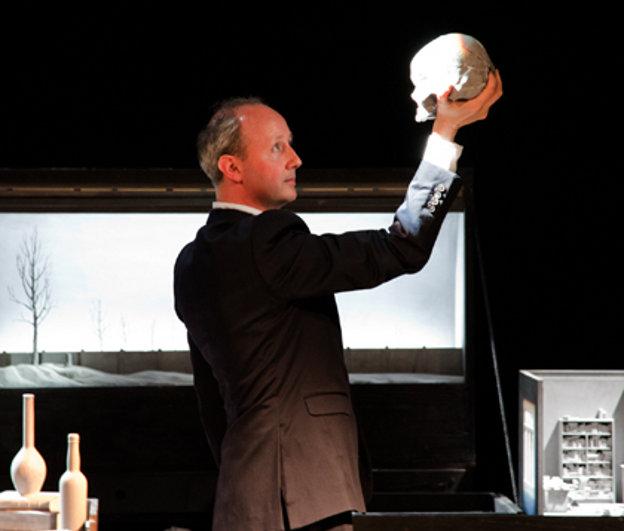 Telling a story through parallel voices is a familiar theatrical device – witness Michael Pinchbeck, Chris Goode and others. Here, though, we have a story told by a theoretical cat (Schrödinger’s, no less), the writer/actor Pieter De Buysser, and a character called Sebastian who Pieter tells us is fictional.

The main story belongs to Sebastian. He is a campaigner, a big thinker, a tracker of DNA codes and a father to teenage Tilda. His torso emits light, which attracts moths. Tilda owns the cat.

Pay attention at the back!

Sebastian has discovered all sorts of world-affecting and incriminating information about international organisations that are now closing in on him in a threatening manner. Tilda responds to her father’s situation by taking objects from their house and burying them in the garden.

Complex ideas around democracy, economics, communication, utopias and freedom are explored through Sebastian’s lengthy writings to Pieter. There is a hint towards Damanhur (an Italian eco and spiritual society built inside a mountain) with the introduction of a character called Nobody who falls in love with Tilda. The story rounds up with Tilda burning her father’s book – on which is plotted her future life trajectory through her DNA code. It included the date of her death, but it didn’t include this highly emotive and often political act, of burning books.

All this is beautifully played out by Pieter, a calm and engaging performer with an expressive face. A giant trunk (made by artist Hans Op de Beeck) opens out ingeniously to represent the landscape and homesteads of Sebastian and Tilda. All is grey and delicately lit, like a Giorgio Morandi still-life painting.

At ninety minutes, Book Burning is a bombardment of ideas and interweaving storylines; it requires and repays full attention. Delivered in English with playful ‘Dutchness’, it may try a bit too hard to pack everything in, and who can judge the truth – might not Wikileaks’ information be as biased as the CIA’s? But it is good to see theatre that tackles historical and contemporary issues in such an interesting and evocative way.

Yet again The Basement shows its metal in programming strong European work at Festival time.