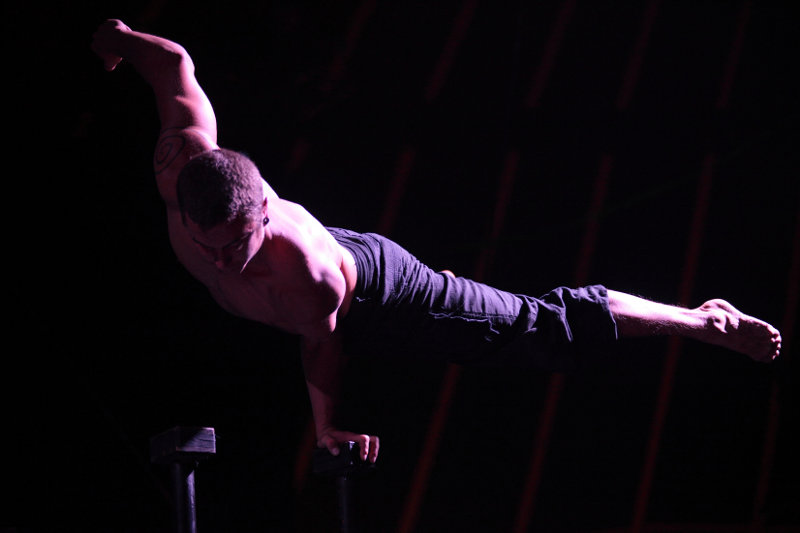 All to the stage please! Cue entrances! Ladies and gentlemen, boys and girls, please welcome our performers: a stroppy princess in a party frock who thinks she’s the star of the show, a Finnish acrobat who is missing the snow, a slim ginger-haired tightrope-walker who has fallen many times (fallen for a girl); a wide-eyed flying flapper who’s still ironing her dress, and a jaunty sailor-boy and girl up a mast.

Flown uses the popular theatre (in both senses of that phrase) device of a show within a show. The cast play a motley crew of characters – heightened versions of themselves or clownish alter egos – who are assembled on a ramshackle set (cue aerialist crashing down from a broken lighting rig) to put on a show. Things go right and things go wrong (mock-wrong that is). People tell jokes: ‘What’s a fly with no wings? A walk.’ People take a breather from spinning in a wheel or dangling from a rope to mouth little monologues of confession (although they don’t do that half as well as Montreal troupe Les 7 Doigts de la Main, who have this breathy autobiographical-confessional trick down to a tee). There is much referencing, verbally and visually, to the nature of that beautiful dangerous thing that is the circus.

Often, there are two or more things going on at the same time, a kind of layering which reminds me a lot of No Fit State Circus but I suppose is as old as circus itself really – for example, a boy walks a highwire playing harmonica, whilst a couple spin in a cyr wheel, and the forever-ironing lady uses her board as a percussion instrument. There’s a lot of using things as percussion instruments – at another point the stage is set humming with a Stomp-like barrage of beating metal on metal.

Whilst there are many points of reference and comparisons with other contemporary circus shows in some of the dramaturgical decisions, Flown is never the less its own lovely, unique self. The spoilt princess is a fantastic character – arriving on stage in a cart pulled by a ludicrously small toy horse, performing a silks act in which she ends up tangled in the rigging, and playing electric guitar whilst flying harnessed in the air. Many of the other circus artists are also musicians – our ginger-haired tightrope walker turns out to be a pretty decent kit drummer – and there is also a live band, who find themselves drawn into the circus action. Or drawn up – there is nothing this company won’t have a go at harnessing and flying through the space.

Apart from the marvellous pouty princess – so rare to see brilliant clown and aerial going hand-in-hand – there is a wondrous Chinese pole act by sailor boy and girl. She in particular is amazing – so strong, so fluid. The choice of Irish folk song She Moved Through the Fair is a stroke of genius, a perfect match for the poignant choreography.

Flown was first commissioned by Glastonbury Festival for its Circus Big Top in 2011, and has subsequently been supported by production company Crying Out Loud. It’s a delightful show brimming with skilful, funny, and heart-warming performances; boasting an ingenious set full of mechanical curiosities; and a great integration of live music and physical action. And how good it is to see a new British circus company making their mark at the Edinburgh Fringe!