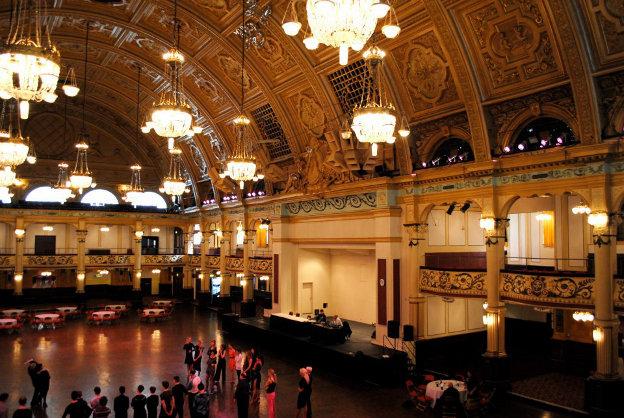 Vic Godard and the Subway Sect’s lyrics accompany our journey North from one slightly seedy beach-front tourist destination (Brighton) to this one:

This is the sixth Showzam! Festival, promoted and produced by VisitBlackpool in partnership with Professor Vanessa Toulmin. For us it is a first visit to this notorious working-class seaside city of fun; how will Vic Godard’s lyrics chime with us I wonder?

It is a glorious evening, the sea and miles of sand glowing orange in the late sun. Our Victorian red brick hotel, the only one right on the promenade, shines like Tuscan terracotta. Inside it goes a bit Victorian Gothic, with wood panelling and an overly bright blue. Once a Butlins, always a Butlins.

There is just time to catch the light on some shop fronts in their tawdry beauty before heading to the Winter Gardens for our first show. 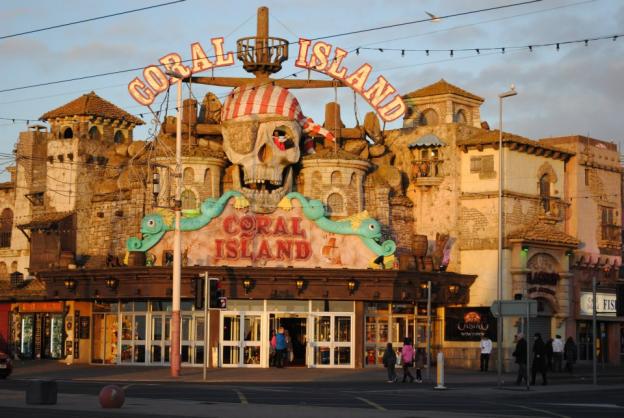 The venue is eerily quiet for a Friday night. A small group gathers in the only available bar for a quick stiffener; we are about to be Spooked by Spymonkey. We are led up through the (unfortunately closed) 1929 Galleon Bar to a darkened Baronial Hall. Here, lit by candles and torches, Tony Perks, MPhil (Toby Park) and Dominique von Essenundtrinken (Petra Massey) introduce themselves and their remit for tonight’s show. This is the standard Spymonkey opener – establishing character and wrong footing audience expectation of what is to come. Petra’s diction is an inspired mixture of mock-Bavarian (Bawarian, soft w) from Germany, soft G. She and Toby dig at each other; they are pompous idiots and we are in safe hands. Basura (Aitor Basauri) and Kurt (Stephan Kreiss) complete the cast. Their hands are less safe; particularly Kurt’s who, pushing a wire through his veins with glee, drips stage blood into a bucket. 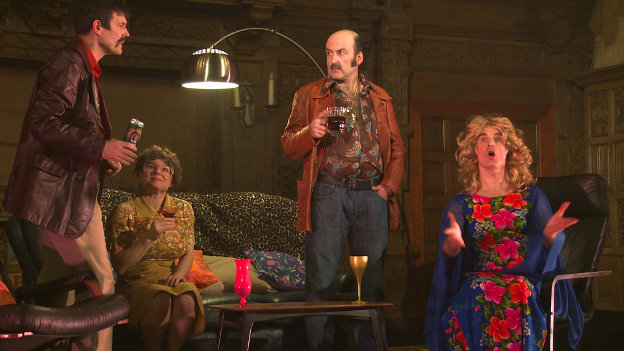 A variety of spooky scenes, manifestations and gory, bad magic follow, in different parts of what is now revealed as a large and somewhat kitsch interior. Moving the audience around by torchlight is charmingly done, if a bit ad-hoc. It will improve with more time in the space. Star turns include Kurt’s persistent blood lust evidenced through tricks such as sawing Basura’s hand off (done with gusto by a volunteer) and a mind-control sequence that goes horribly wrong as the ‘volunteer’s’ head is blown off; the audience yelps.

There is a delightful filmed sequence of the opening of Nefertiti’s tomb with live interaction in the Forkbeard / 1927 tradition, complete with sand-dance and comedy walks.

The finale is a hilarious combination of Abigail’s Party and Rosemary’s Babywith a touch of The Exorcist for good measure. This piece shows the company’s acting chops. The characters are all brilliantly on the button and the script is properly funny. ‘I blame Harold Wilson’s government,’ splutters the hairy chested lothario Tony (Aitor Basauri) as he drags off a suitcase containing a deranged Angela (Petra Massey).

Directed by John Nicholson (Peepolykus) Spooked was shown as work-in-progress and has been formed in the room, which isn’t an easy space to navigate over just three days. The main pieces are brilliant flashes of the Spymonkey genius and Spooked could become a fine new entry to their repertoire.

7.30pm Time only for chips. I am quietly pleased to be forced to eat the staple diet. A cheery chap in the Corner Chippy provides.

8pm The Dancer and the Devil by Rogue Theatre

Grabbing another libation from the one open bar, we head next to the Winter Garden’s Pavilion Theatre.

A path of dead branches, old photos, suitcases and dusty books marks our way along the Horseshoe promenade that rings the theatre. A woman in Victorian style costume (Laverna, our hostess) ushers us with a throwaway ‘sit anywhere’. There is a lack of theatrical flourish or care about this first moment of audience engagement that worries us.

It is a big room with cabaret style tables and is rather chilly. The stage is fulsomely cluttered with the period paraphernalia that shouts out “Vaudeville! Corsets! White faces! Nostalgia!” A fake proscenium arch and curtain presents an initial impression of lavishness. In reality the theatre is a shell, with no backstage and no wings and sadly this is a metaphor for the show itself.

There are so many layers of narrative device here that all sense of story, as written by Anna Maria Murphy, gets lost. The piece is set in Laverna’s Limbo Lounge, where a group of performers, fleeing their past lives and scarred by war-time secrets, play out their destiny on her stage each night. Exactly what wars, or why limbo (so there can be a devil perhaps) is unclear. It is really an overcomplicated vehicle for the individual talents of the cast. There follows a series of character turns from the cast of women, introduced and framed by Jacob the Devil (founder member Ollie Oakenshield) such as Cupcakes (Becky Bordeaux) who makes bad cakes, and Celeste (Gemma Kempthorne) who has to dance herself free of demons.

It is a hard space to work, with a small, high stage and a gulf between audience and performers. Director Angelina Boscarelli does her best at containing the action. Good judgement is shown in the selection of Rory, from ‘the Colonies’ who provides a blast of energy and fun as he spins Cupcakes on a wheel of fortune. But given that the show is supposedly story-led, this insert, welcome though it is, is an odd fit.

The live music and singing by multi-skilled new musical director Ben Sutcliffe is great and some performances are strong enough to overcome the shortcomings. I can see it working much better where there is a closer relationship with the audience, in the woods perhaps, where it was originally produced. The leaflet promised wild thrills. Beware what you promise.

10pm The evening ends with a nightcap in the Cedar Tavern, the only other customers a couple and a dog. One has a pink Mohican. Not the dog. We share a snack described as a ‘ploughman’s lunch in a packet’. That’s a first for me. There is a Sooty collecting box behind the bar (Sooty was ‘discovered’ on the Central Pier; there is a blue plaque) and a dartboard on which I score a triple then break a flight. The barman comes over for a chat. They really are very friendly people up North.

Whilst music blares out of bars there is little evidence of on-street partying or unmentionable behaviour and the hotel’s in-house entertainment seems to be over. An early night – in the party capital of Lancashire, what’s going on?

Breakfast in a big, busy room; it looks like the sun might break through. We catch a tram to the Pleasure Beach where I want to see the old Big Dipper. But the entrance fee is high and time short so we make do with walking around the perimeter and peering in through gates. A whiz round Ripley’s ‘Believe It Or Not!’ is small compensation, though I find the captions infuriating as they all say ‘Believe It Or Not!’ at the start or end of every sentence. 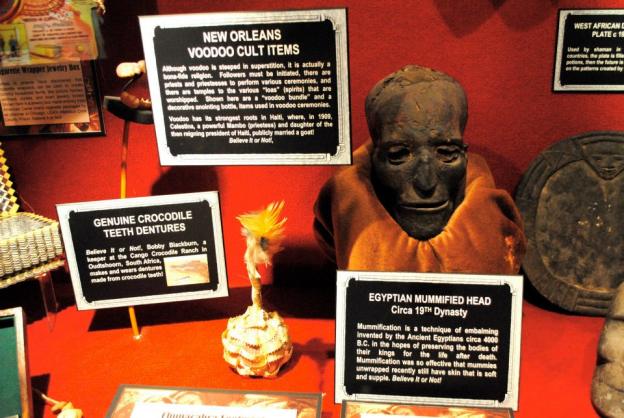 The Winter Gardens is a complicated combination of buildings, spanning several periods of construction, destruction, re-build and adjustment, ownership and purpose. Professor Vanessa is an extremely knowledgeable and confident guide to this complex scenario, spilling out dates, facts and anecdotes with enthusiasm and total passion for the place. She has been involved in its restoration, and is largely responsible for saving parts of it from demolition, working at cabinet level for the past seven years. Blackpool is very lucky to have her.

As she is explaining the main building periods (1875, 1888 and 1939) and the premise, akin to Crystal Palace, of an inside ‘resort’ for the middle classes to winter in – no spitting, no dancing – who should stride into the foyer but Christopher Biggins. ‘Listen to the Professor,’ he commands. ‘I am speechless!’ Vanessa says as he walks away. A dramatic swivel from Mr B, ‘Oh no you’re not!’ 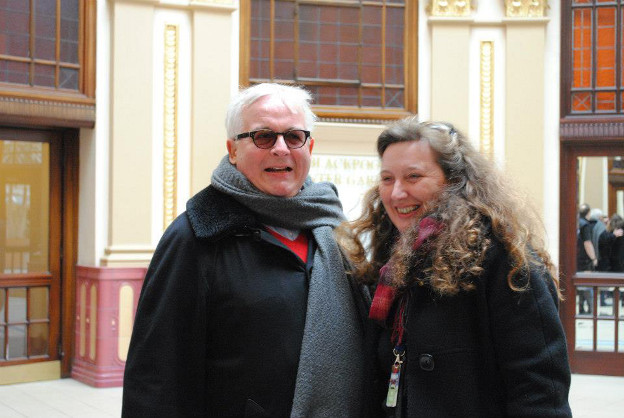 We are led through the metal girded promenade, which echoes St Pancras Station and has lovely blue faience tiles, into the Empress Ballroom, opened in 1896 to compete with the Tower Ballroom of 1894.

Next is the Opera House in its Art Deco glory, and we are given access to backstage and private rooms. The Prof is justly proud of saving this gem and looking forward to it being restored to its proper colour scheme in due course. It previously had a Frank Matcham interior, hosting circuses and opened by Sarah Bernhardt – in French. Later we are shown the fabulous tiled entrance that had been painted over and boarded up that was found on a late-night, undercover investigation.

The Horseshoe Promenade once surrounded the whole building, glass fronted and bringing the outside in. The Pavilion Theatre was largely gutted and is now in jeopardy.

Spymonkey are rehearsing so we can’t go into the Baronial Hall, but Professor Vanessa tells us about Atmospheric Architecture in the equally theatrical Spanish Hall (designed by Andrew Mazzei, a Hollywood film set designer).

Finally the Olympia, a big open space which once held freak shows and arcades, and is being used for the The Wookey Hole Circus School and side-shows. It is agreeably busy with families and diverse groups of people enjoying the main event, the side-shows and the old penny machines.

5pm Kindly barman Mr Phil Guthrie shows us the interior of the Grand Theatre. A Matcham gem, it has been restored to its original colour – blue. Matcham theatres were always blue for the seaside, red for the town. Phil fully expects Ken Dodd to ‘do a Tommy Cooper’ here, i.e. die on stage.

6.30pm Dinner at the Mandarin Chinese, where the wallpaper and interior was inspired by Brighton’s Royal Pavilion, which the maitresse ‘d loves.

The grandest and most lavishly decorated ballroom in Britain, surely?

We are just about adequately attired for this night of 1920s music, dance and entertainment. Everyone is in full party mode, dressed to the nines, dancing the Charleston, and having a wonderful time.

Our hosts The Sugar Dandies provide a suitably camp touch with song and dance routines. The Alex Mendham Orchestra is delightful and a great new find for me. There is a dancing troupe Les Girls – with a token man. Desiree, who performs a butterfly dance inspired by Martha Graham, and a feather contortionist dance, has a strong presence. Hoola Hoops always amaze audiences and tonight’s dancer doesn’t disappoint. She may not have the glamour of Marawa The Amazing but the skill level is high. Romany – Diva of Magic conjures birdcages from the air in a brief plug for her solo show. The Invisible Circus make a similarly short appearance to promote The Last Waltz, the big event of next week, commissioned by Showzam and separately funded by The Arts Council.

Comedy is supplied by Granny Turismo on motorized shopping trollies, making full use of this fantastic floor, and Spymonky who bring the house to its knees with their Joan of Arc skit.

Dancing continues until 2am, and dance we do.

This is Professor Vanessa’s final Showzam. The throng of Blackpool residents clearly know and value her. She is presented with flowers by Chris Pope, who takes over next year. Chris tells me he wants to involve more local people in the Festival, and broaden its appeal. There is certainly scope for that, above and beyond the workshops, tours and street theatre it currently offers. He’ll need to bring in some national or international performances too, in order to generate the tourist market that VisitBlackpool needs in this off-peak period and to support the regeneration of public spaces in which they and others have invested. I hope he gets out and about to seek the best performance of its kind; new and adventurous and using the phenomenal architectural pleasures of the city.

So, to return to my opening salvo, ‘Pull the whole place down’? Go to Showzam! next year, Mr Godard – you may want to write a new song.