Rhiannon Faith bounds into the bar full of beans, stories and thoughts about both future projects and her current work, Scary Shit. She has just finished bombarding Edinburgh Fringe audiences with things we are not supposed to talk about (with a successful run at the Pleasance Courtyard throughout August). In conversation, Rhiannon is as dynamic and honest as she is in performance, with a solid grasp of what she wants to make and how to get there. She chats about patriarchy, feminism, friendship, fannies and nobs…

Rhiannon has a wealth of talents. She holds an MA in contemporary dance-theatre practice, a PGCE and a string of awards. Commissioned to choreograph for film, and a visiting lecturer at the University of Bedfordshire, she is also the creator/director of her autobiographical work, Scary Shit. This is performed by Rhiannon and Maddy Morgan, a contemporary and hip hop dancer (who also holds an MA in cultural policy and management).

Scary Shit uses speech, poetry, dance and comedy to portray two young women navigating their way through life together. Two girls who happen to be best friends undertook therapy sessions with Joy Griffiths, psychotherapist, whose voice emanates throughout their work and whose presence in their lives still crops up often during the interview. It shines a spotlight on their friendship by revealing issues that unfolded during therapy sessions and how they support each other through everyday life. The subjects that were flagged up during therapy are by default personal to both Rhiannon and Maddy, but their lives relate to every woman as the societal themes link them all together in the piece.

In discussion, Maddy’s name pops up as often as it does during performance and I get the impression that to be a fly on the wall observing their lives would be like watching the epic version of Scary Shit, the lines between reality and performance becoming ever more blurred. Moving on to chat about how the work has developed both prior to and during Edinburgh Fringe, the most pressing issue on Rhiannon’s lips is her injury. One show had to be cancelled as Rhiannon suffered whiplash and concussion – self-induced from repeatedly running into Maddy and a crash mat, whilst head-butting her. This is a startling moment in the work where breaking barriers, self-punishment, cries for help, and attempts to get through to someone, are all evoked in one repeated phrase.

‘I love that moment of the show, this bit is physically hard, and that’s how it should be.’ says Rhiannon. ‘I had my pink fluffy helmet on, so I thought I am well protected, but when I got home my back and neck didn’t work anymore. I lay on the floor and I was like  – shit, what if I’ve done something to my head? And Maddy got the paramedics around… I made Maddy sleep next to me because I thought I was going to die!’ Scary shit indeed… 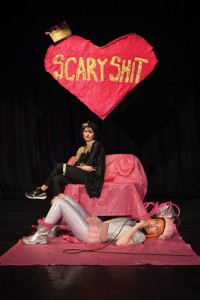 By now, this scenario is entirely feasible having been introduced to Rhiannon’s constant worrying and reliance on Maddy during the show. We move on to giggle about Magic Hands Steven, the physio, and Rhiannon’s trip to have a head scan. As the drama unfolds, I feel like I am living through another Maddy/Rhiannon saga and wonder how long it will be before this chapter is added to the show. We joke about how her dedication to reliving the physical and emotional experiences of the past during the show can take its toll – that’ll teach you to take phenomenology too seriously!

I ask Rhiannon if reliving the past every day in performance keeps her in a state of limbo where she can’t move on.  Is she at risk of becoming stuck at the height of her emotional, physical and mental responses?

‘As soon as we hear Joy and the therapy [recordings] it automatically triggers us back into that headspace, and you do emotionally have to revisit everything. It changes for me every show… where it gets me.  Today when I was getting off the chair and Maddy was doing her dance, that bit really got to me because it just goes through my head what she is going through, and conversations that we’ve had, so I do feel like I am living through it again – and she does the same.’

Maddy presents two scenes during the performance that have the ability to choke viewers, and out of nowhere I am suppressing tears before the comedy redirects my focus. She deals with how it feels not to be able to have children, and she confronts a rape; both autobiographical subjects.

Is there a limited time to tour this work because of the emotional toll, I wonder?

‘I thought about that, as we were going to do a show everyday. Is that going to change how we feel about it? But there are so many triggers… She’s my best mate, so whenever she talks about that it evokes emotion in me, especially as I know everything about it and how hard it has been for her. At the beginning of the show I’m thinking this is about our friendship – we just have to look after each other. Inevitably we’re going to look after each other, so it’s ok.’

I get the impression that because these women are dealing with the show’s themes in real life and finding ways to cope with them, the show simply becomes part of that, triggering emotion but ultimately triggering coping methods as well: ’We’ve learnt how to talk about it and how to switch off, and if it gets too much we talk to Joy and Joy quickly reframes it to us’.

Scary Shit openly addresses scary themes in a frank and honest manner which is true to Rhiannon’s mission; to make art that opens up things that we don’t talk about. Referred to as vulgar by some, this fuels the aim of her work to address why women are silenced. Periods, pregnancy, the inability to have children, the confusion around wanting children or not, rape, consent, being dumped, being scared to answer the telephone, form the content for the work that came out of their therapy sessions. The overarching spine is that of friendship which celebrates female relationships in a world where male/female love conquests dominate. The work has been adapted and changed during a studio week and tried out at festival gigs prior to Edinburgh, always with these themes at the core:

‘We made the decision to bring in Maddy’s story earlier on. The first 20 minutes is for the audience to go: What the fuck is this? Then, to start to trust us, and like us, and to realise that I’m neurotic and Maddy, she doesn’t want to talk about anything really, and just to be a bit silly before we get serious. Then we go straight into the poems… We’ve switched that up because I guess we felt that we wanted it to be a bit more brutal earlier on, so that when we do talk about stuff at the end it has a bigger impact.’

The poems ‘Holy Shit I haven’t had a Baby Yet (a conversation) and Baby Box Blood Bath graphically describe the thought processes and bodily functions that surround periods and vaginas, and not being able to have a baby. The choreography creates a juxtaposition of the grotesque and the beautiful, signposting the underside of a woman’s life that is suppressed by society. This feeds nicely into the biggest addition to the work, the ‘Fannies go for a summer stroll’ section:

‘We wanted something that was more about the bigger picture. We needed to have that wider idea about patriarchy and I wrote a script about a cock and a fanny and it was shit – but then we were like – no it should be two fannies!’ 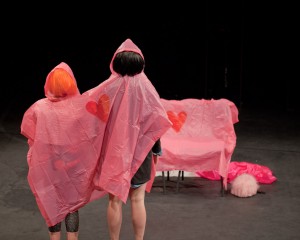 Patriarchy pops up often in conversation with Rhiannon.

‘We realised that it needed something like that; something that wasn’t just about us. It was more about why women have to do what we do, and why we have to tell these stories, and why we’re so fucking scared.’ In a society where men automatically hold power and women are often silenced, raising awareness and fighting gender stereotyping, sexism and harassment is vital. The finer nuances of these issues are highlighted in the show, helping viewers to understand how society has conditioned gendered behaviour and disguised it. Swop the word fannies for women in this poem and all becomes clear.

‘I want to make art that opens up things that we don’t talk about and allow us to be vulnerable so that other people feel like it’s OK. What if we try and figure out why we fear so much, so that when we’re in that place we can figure out how to deal with it. That was always the intention of the work and I feel like every work that I will make will have the intention to help me learn how to be better as a human being. That’s why I had to go through the therapy. Society is not equal. There is violence against women. We need to open up this dialogue.’

Rhiannon is already taking this mission forward, as her future show is in motion: Smack That is about survival and resilience, friendship and violence. Rhiannon will be working with women who have experienced violence and abuse.

‘We are working with a theatre and a charity. We are going to do workshops with them and we’re going to talk about their stories. We want to invite three other performers who have experienced violence themselves and want to be part of the project. And then perhaps doing those workshops over a long period of time, maybe a couple of participants will be in the show as well. Joy Griffiths [featured in Scary Shit] will be managing the psychotherapy.’

If anyone can achieve this mission, I believe it is Rhiannon. Her tenacity, creative spark and awareness of the world’s bigger pictures make her work interrogative, dynamic and relevant to all, both men and women.

‘Scary Shit is my mix-tape and Smack That will be my EP and then my concept album is already in my head, and that’s going to be a big one, ‘ she says. ‘I want it to be at the Barbican.’

Speaking of mix-tapes, I ask Rhiannon to say which song she’d choose to be played for the rest of her life, whenever she enters a room. After some deliberation: ‘Queen Bitch by David Bowie.’

Rhiannon is a successful artist, teacher and director who reveals that women can be vulnerable, scared and powerful all at the same time. She shows strength in asking for help and displays love and loyalty in her friendships. She is a silly, serious and brave contemporary female heroine. She will go far… 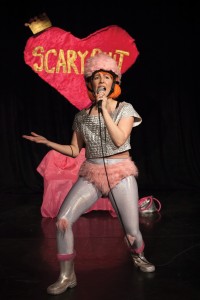 Rhiannon Faith’s Scary Shit was presented at Pleasance Courtyard 3–29 August 2016, as part of the Edinburgh Festival Fringe. An earlier version of the show was reviewed by Rebecca Nice for Total Theatre Magazine in February 2016. For more on Rhiannon Faith and tour dates etc see www.rhiannonfaith.com