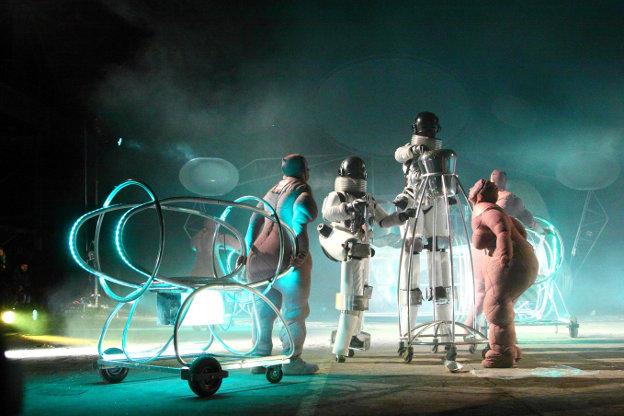 Welcome to the future! This is the future as it used to be – spaceships, robots, and hovercraft-like vehicles. Planet Lem’s vision is of a world in which experiments in Artificial Intelligence have led to robots taking over all the important work of the world. Humans, relieved of all major responsibilities, with no productive work to do, have become idle and useless.

In their latest piece of spectacular outdoor theatre, Teatr Biuro Podróży present ‘a story never written’ – a kind of loving homage to the ideas of Polish writer and philosopher Stanislaw Lem. Lem is probably best known as the author ofSolaris, a metaphysical sci-fi novel which ponders on the nature of reality and has been filmed three times to date, although it would seem that this show is more interested in referencing the more humorous and satirical Cyberiadstories. It all works on many levels – there’s enough ‘Lem’ details to amuse the fans, but the story is an archetypal one that questions what it means to be human, and it is presented as a jolly good bit of outdoor entertainment, so knowledge of the novels is certainly not a prerequisite to enjoying the show.

Teatr Biuro Podróży have a deservedly high reputation for their inventive use of stilts in outdoor performance. Shows such as the legendary Carmen Funebre(which played for just one night here at the Quad as a fundraiser for Amnesty in the week of the Pussy Riot trial verdict) and the more recent Macbeth: Who Is That Bloodied Man? (which had a good run for the first half of the Fringe at the same venue) prove that stilt-work can be more than cheery walkabout festival fodder – it can be used to dark and dangerous effect in stories that tackle such subjects as the Bosnian conflict, as is the case in Carmen, or rework and cast a new light on the terrible tragedy of the Scottish Play. Their influence has been seen far and wide – with UK street theatre artists such as Periplum acknowledging their debt to the company.

There is a certain aesthetic that we associate with Podróży – black-cloaked creatures towering above us, flame-bearers racing through the space, rusting metal structures, fires in braziers – all pretty Gothic. In Planet Lem, director Pawel Szkotak goes for something completely different – everything is white and bright, and there’s a kind of retro sci-fi look to it all, a techno soundtrack adding to the back-to-the-future feel.

The robots are suitably big and shiny-silver, and there’s a great ‘spaceship’ frame-construction which is like a giant trampoline on its side that rises up to great effect, the human figure inside it spread-eagled, Catherine-wheel style. There’s plenty of kit involved in this production – including video screens, TV monitors (which, if I’m not mistaken, play some vintage footage of Lem himself speaking), and a whole formation of high tech shopping trolleys that act as sleeping/eating stations for the humanoids, who are kept docile by being fed hallucinatory drugs (a nod here to the placating Soma in Brave New World, then – although perhaps Lem had the idea independently as he and Huxley are often working on similar territory). These poor hapless humans are played by actors in squidgy pink whole-body-mask suits (‘like Teletubbies with tits’ as a colleague remarked gleefully).

It’s all a jolly good sci-fi romp for much of the time, with lots of crowd-pleasing lift-offs and robot-battles and whatever, but the sections that I enjoy most are the ones that are the least spectacular, such as the scenes in which a roller-blading man-in-black and a ‘noble savage’ space explorer forge a relationship. I’m assuming these are representing robotic engineers Trurl and Klapaucius from the Cyberiad novels, ‘constructors’ who, god-like, roam the universe fixing problems on distant planets, alternating between rivalry and friendship. The way the performance space is used in these scenes – both figures on the same level – no stilts – but moving with different patterns at very different speeds – is an interesting contrast to the robot/humanoid encounters that use the more familiar play-with-scale Podróży-style groundlings versus stilt-walking monsters dynamic.

The show is in its first year, and it hasn’t yet bedded in, but it is good to see Podrozy playing with a very different aesthetic, and introducing humour in a more upfront way. I’m also amused by the use of cigarette smoking as a motif of individualism and redemption! An interesting show rather than a great show, but it is early days yet for Planet Lem.

There’s a message here in this depiction of Lem’s vision – which shares with other ‘philosophical’ sci-fi writers of the 20th century (Aldous Huxley, Philip K Dick, JG Ballard) an interest in exploring what it actually means to be human in a world of ever-increasing new technologies. In our contemporary striving for everything to be clean-cut, smooth, easy, and trouble-free, we are in danger of losing our core humanity. No pain, no gain.