The decision to go surprised everyone, not least myself. The beginning of February had brought a small brochure of a small festival to be staged at the end of the month in a small French town I’d never heard of named Apt. The main attraction was that it was a festival run by two admired friends, Charlot Lemoine and Tania Castaing, whose company, Vélo Théatre, does uniquely brilliant work in the field of object theatre.

To travel alone for any distance is rather risky for me nowadays, but right on cue another friend, Sally, younger and stronger than me, came to stay and declared she would like to accompany me. Added to that, Eurostar had a special offer on the upgrade, the train would take us to Avignon (close to Pays d’Apt) which we both longed to explore, a warm welcome was promised by the Vélo people, a two-star hotel near the action had rooms free, so off we went. The adventure was clearly meant to be. 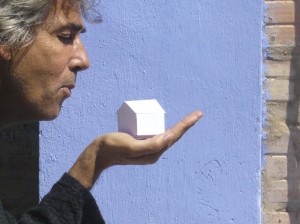 Greli Grelo – the name of the festival – promised a feast of off-beat productions, some imported, some local, accenting visual riches and eccentricities, humour and tendresse in nine or ten productions.  For me the star offering was the Vélo show, which has actually been to Britain twice, (to Manipulate in Edinburgh, and to the Brighton Festival), but which I hadn’t seen. When I tell you that the show was called La grenouille au fond du puits croit que le ciel est rond (The frog at the bottom of the well believes the sky is round) and that there were neither frog, well nor sky in the performance, you will understand that a certain kind of humour pervaded not just that show but the whole festival.

The Vélo Théatre’s company home is in a vast factory which once produced crystallised (candied) fruits but is now all theirs and the main source of artistic life in the town. They have theatre and exhibition spaces, recreation spaces (one with a bar), a 40-foot long terrace, wide corridors adorned with bicycles (vélo means bicycle) and a dining area with a refectory table that seated at least 40 people, with an adjacent kitchen where a number of inspired cooks produced two hot and healthy meals a day for special participants of the festival, performers, organisers, volunteers – and a couple of foreign visitors. The whole place was a sea of colour, with hundreds of flags and posters and an accumulation of unlikely objects collected from the company’s travels.

The Frog show is one of Vélo’s best ever: it concerns an old collector of houses (300 of them) also beautiful delicate objects which in an installation are transformed by lighting and shadows into things magical. In the second half the spectators are invited to wander among the objects and wonder at their transformation. Charlot plays the collector and made me laugh a lot, and Flop – Philippe Lefebvre, a gifted fine-artist, (plasticien) – is responsible for the machines and shadows of the dreamlike installation. His conjuring with light and shadow also formed the exhibition, Va-et-Vient, in the Vélo factory. 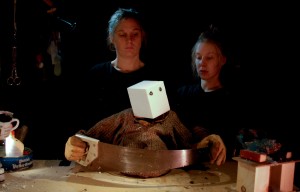 A bus ride took us to another town, Cavaillon, to La Garance Scene National, a fine big ‘national theatre’, one of 61 throughout France. Here we saw a more serious show, De Passage (On the Way), by Johanny Bert and Stéphane Joubertie, about a boy on the way to adulthood, confronted by lost love and death. All the spectators had to wear headphones, to feel immersed in the intimacy of the piece.

One of the shows, Dans l’Atelier (In the Workshop), was played by two young women of the TOF company from Belgium. The setting was a workbench with the torso of a large puppet whose head was being fashioned from a polystyrene block, which when placed on the body brought it to life rather violently. The two operators exacerbated the violence through their attempts to sculpt the head with a large saw and knives. The polystyrene flew everywhere and I worried that the puppeteers did not wear a mask. The audience found the whole affair hilarious. The show has toured extensively, in spite of its dangers!

There were two ‘nonsense’ shows, one played by another pair of women, members of a company from Normandy called Théatre du Champ Exquis (this defeats my limited colloquial French – surely not ‘delightful field?). The set was lovely – a huge white umbrella and objects moving in motion overhead on strings and many intriguing objects in the playing space below. One was a finely crafted paper castle that sprang as a pop-up from a huge book. Called Et Si! the action was quite inconsequential, rather as Alice in Wonderland is inconsequential, but for me it was validated by lighthearted humour, the scenography and an internal logic that I found enchanting.

Another company from Belgium, Gare Centrale (Central Station), is well-known on the festival circuit. Conversation Avec Un Jeune Homme featured Agnès Limbos, in crinoline and pompadour wig, growing old in a forest, in conversation with a thin young man who was a fabulous dancer – a faun of the forest, I think. It was an enjoyable affair, but I couldn’t grasp its – well – logic.

Gruppe 38: Hans Christian, You Must Be An Angel

Denmark’s Gruppe 38 provided an original take on the Hans Andersen tales: it was called Hans Christian, You Must be an Angel. (This festival would win a prize for peculiar titles.) Difficult to do it justice in words – a sure sign of a good piece of visual theatre – the setting consisted of a huge dining table laid as a banquet for ten, the upright chairs being of metal with odd things attached to some of them such as a cluster of bells or rockers on the legs. The spectators were free to walk around the table (there were two voluble guides) where strange movements and effects took place at different points, all referring to the Andersen tales. If you were not familiar with these you might have been a bit foxed, but the apparently autonomous animation of the objects (however was it done?) was an entertainment in itself, and a kind of exercise for the imagination in the linking of the moving objects to the stories. The Ugly Duckling was a recurring theme, and the show culminated with the self-opening of a little suitcase where, in the lid, was the projection of a gliding swan. The show had the virtue of originality – I’ve never seen one like it.

Children of all ages from 18 months were catered for, there wasn’t a dud show and the houses were full. Greli Grelo is an annual event, and long may it and all the work of Vélo Théatre continue to light up a beautiful part of France, the Lubéron. I would love to go again – a total theatre delight. 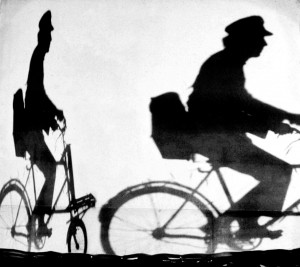