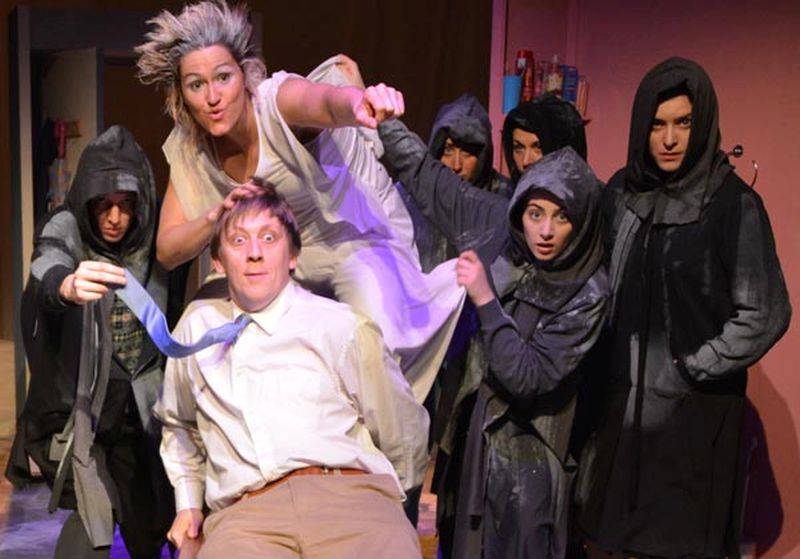 This show, by young physical theatre collective The Upstairs Brigade, all graduates of the MA in Physical Theatre at St Mary’s University, opens with a group of mysterious black hooded figures performing a dance routine. Then it quickly shifts style into a quirky and comic play set in the suburban home of a middle-aged Polish man, Stanislav, and his British family. It is his 40th birthday, and his somewhat neurotic wife has made arrangements for family and neighbours to come and celebrate. The characters are rendered as exaggerated caricatures, including two brightly sketched Polish sisters, one cold and uptight and the other giggly and carefree. There is a nerdy male neighbour and a lustful femme fatale, with whom it seems the lead character has been having an affair. It is strong ensemble playing from a talented young cast that paints a clear picture of the uptight mundanity of a suburban life. Stanislav watches with increased agitation as the nervous tension of the socially inept group increases, whilst his wife Linda prompts the group’s ‘fun’ activities.

And then the piece takes a distinctly unexpected direction as a strange woman enters the house, visible only to Stanislav and communicating to him in expressive and highly physical forms of sign language. This sudden change comes at just the right time to punctuate the narrative, creating an element of genuine mystery – in part because the nature of what she is ‘saying’ is hard to discern (for non-signing audience members). Does she represent his conscience? Or his repressed desires for a more exciting life? She is certainly a charismatic presence, and leads him literally down the toilet on a surreal and ambiguous journey, reminiscent of the ghosts in A Christmas Carol.

The set is composed of a series of sections on wheels, which are inventively rearranged by the supporting cast who re-don their black cloaks, to show this journey. But where are we going and who are those mysterious figures? Is he back in Poland at some Bohemian soiree, or somewhat inebriated amongst a group of down-and-outs? The level of ambiguity is intriguing, but sadly the performance I saw was curtailed by a power-cut and so the mystery was never revealed. The power of this production is highly dependent on the degree to which this strange journey becomes clearer, and what actually happens upon his presumed return. It certainly presents an intriguing mixture of theatrical styles performed with skill and commitment.