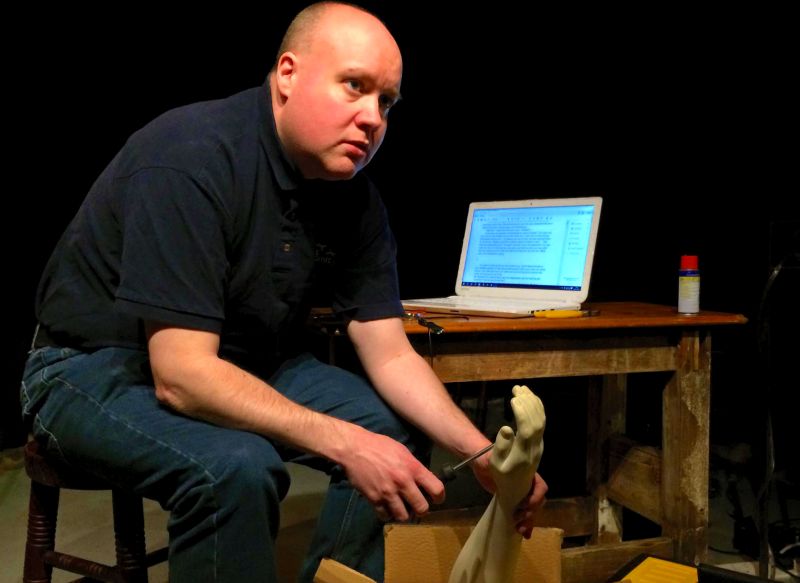 There are a host of good intentions behind Insomnia, but not as much in the way of multimedia theatrical innovation as the show’s promotion suggests. Local company ZLS have carefully developed their cast of characters and present sequential snapshots of their respective sleeplessness, cut with video interludes.

The show’s premise, setting out to stage the weird liminal state of late-night insomnia, seems to propose a rich territory. The tag line ‘When you don’t sleep, who else wakes?’ makes a good soundbite, but reflects the lack of focus in the show as a whole: beyond the starting point of their wakefulness, there is a vain wait for coherence between the disparate storylines.  ZLS certainly have ambition: the four cast members inhabit a slew of genres – subaquatic, post-apocalyptic silver-catsuit-clad science fiction; hair-braided, gown-wearing mediaeval fantasy, featuring deals with dragons and putting peasants in their place; the creepy thriller of a lonely, resentful programmer building himself a robot girlfriend in his bedsit; and in psychological drama, an institutionalised teen. The performances are solid, the rhythm of each scene meticulously metered, yet it is missing an emotional core; too much textbook technique and nowhere near enough personal investment.

The staging is unconventional – mismatched chairs laid out seemingly randomly, between the precisely marked performance spaces in The Brunswick’s chilly cellar, means that the audience are only looking comfortably at one or two of the actors at any point. This can make the repetitive format feel overlong, especially when long video interludes are projected onto a small, partly obscured section of wall.

Recurring motifs run through Insomnia in an attempt to bring cohesion, and while these invite curiosity, lending another layer to the play, far more narrative progression and resolution are needed to justify the lengthy playing time.

The custom-written stories, which expand on the experience of each character, form an interesting addendum, dispensed to each of us as we were dismissed back to the balmy spring evening outside. This was a literary touch which, with the right audience, could engender lively post-show discussion. Sadly not on this occasion though – the slightly baffled theatregoers all simply shuffled their separate ways. An ambitious undertaking sorely in need of some dramaturgy.