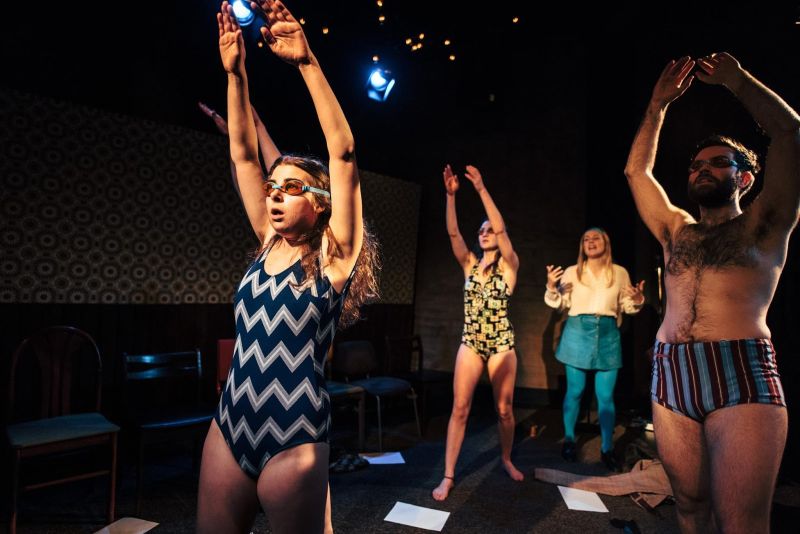 At my girls’ grammar school, the English class of ’72 found DH Lawrence’s descriptions of ‘fecund loins’ and ‘butting haunches’ both hysterically funny and utterly disgusting. For Penny, a college student in The Wardrobe Ensemble’s hugely enjoyable show, Lady Chatterley is a role model, an emancipated woman who ‘wants it as much as he does.’ But Penny (Helena Middleton), like Lady C, is going to be rudely disappointed when her turn comes – or rather fails to.

1972 is a year on the cusp, adrift from the permissive, free-loving, mini-skirted swinging of the 60s and not quite yet embracing Glam Rock, let alone Punk. We have the Osmond vs Cassidy dilemma, flares and feather cuts, Edward Heath and the IRA. Thank goodness for David Bowie and Ziggy Stardust. He connects all the characters in The Future of Sex, providing a glimpse of hope that something special and exciting might happen in their lives. His is the music and persona that can carry them through their experiments in doing it.

But first, the journey to this awakening, introduced with flamboyant panache and a cry of ‘This is it!’ by Tom England’s exuberant Martin. He’s like Antony Sher’s The History Man, and will later seduce Penny with his poetry.

The set is a row of chairs against a patterned wall, a square of dance floor, and four microphones at the corners. Just off stage, composer and musician Tom Crosely-Thorne provides guitar backing, in loons resplendent with Union Jack inserts.

Characters are introduced, and while they are all archetypes, they have idiosyncrasies enough to make them singular and memorable. Their thoughts and actions are described from outside the performance space – ‘This is Antony. His friends call him Tony’ – making the play unfurl like a novel and assimilation of detail easy. Within minutes we know that Christine (Kerry Lovell) is going to struggle to commit to losing her virginity, that gawky Anna (Jesse Meadows) will fall for the seductive Tessa (Emily Greenslade) and patient Rich (Ben Vardy) won’t get to play in a band.

Storylines overlap and the action is seamless, with beautifully choreographed movement and properly integrated music and songs. As the different relationships begin to unbuckle, the pace increases until clothes are ripped off and, in some unflattering swimmies, the sexually liberated teens dash about until exhausted then lie panting on the floor. How was it for you? If all this sounds hugely jolly, it is, but not at the expense of some more serious contemplation. The women in particular find contradictions in the way they are expected to behave; The Female Eunuch is telling them one thing, Linda Lovelace in Deep Throat another. For Antony ‘he calls himself Anton’ (James Newton) gender is more problematical and he finds solace dressing in his mother’s clothes. Tessa and Anna will meet decades later and be disappointed in each other. Christine’s parents’ loveless marriage will disintegrate. Germaine Greer will upset a generation of feminists. Today’s youth may have different reference points and, in Western Europe, a more permissive society, but the same pressures and concerns about sex remain.

The Wardrobe Ensemble’s work, including previous piece Riot (2011), has been rightly praised and they are certainly one of the most accomplished and original companies I’ve seen for a while. Proving, yet again, the city of Bristol’s key role in the development and support of young performers.

As a flashback to a decade that saw me trying desperately to blow-dry my curls into Farah Fawcett flicks, reading Jackie and riding an orange Chopper, The Future of Sex offers focus and fun. The clothes are just right, the haircuts slightly less so, and, if we never said ‘chill’ or ‘hanging out’, I was still right there, with the Spacehopper, the high-waisters, and the awkward fumblings. A very satisfying hour.