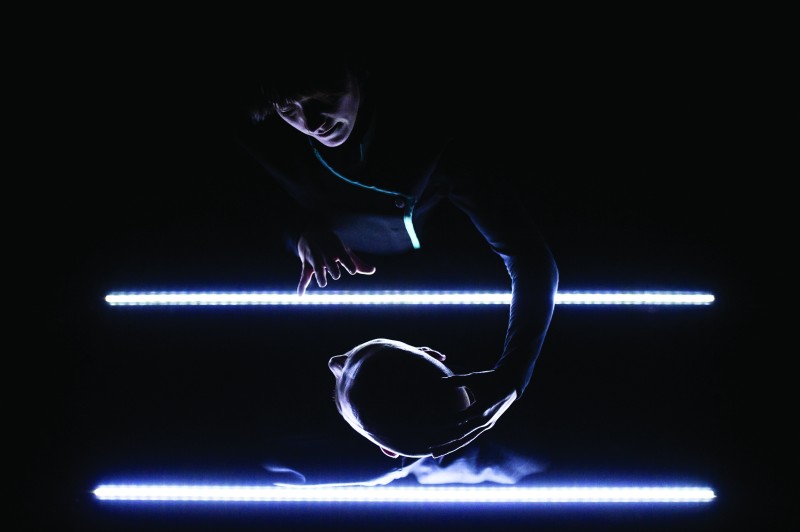 Light is hard to watch. Literally – it hurts my eyes; I wonder if I will develop a migraine. The show’s language is extreme and astonishing: the stage is in total darkness and every image, setting and character is developed using its own shard of light, from spotlight to strip light and everything in between. This is a world painted by movement, images glimpsed and framed only as the light beams are moved. It builds innovatively on the company’s highly developed choreographic language by creating a form articulated by a whole new layer of movement – the angle and rhythm, shape and brightness of the lights themselves, interwoven with the bodies on stage.

As three-time shortlisters for a Total Theatre award (for 2013’s Ballad of the Burning Star, Translunar Paradise in 2011, and Odyssey in 2010), Theatre Ad Infinitum show no sign of letting up on their epic experimentation. Light is a science fiction thriller. It is completely cinematographic in scope, set in a dystopian future where an individual’s mind can be hacked like their email today, using embedded technology that transmits via laser-like light from one brain to another. This transparency of thought has allowed for a cerebral totalitarianism to develop, an idea reminiscent of Orwell here conveyed with the visual panache of Kubrick. A cast of five bring the world to life and the detail of vision – right down to UV technology for teeth brushing and hover bike transportation – is comprehensive. The world feels fully realised, though we see it only in flashes, sweeps, and glimpses, and it is all conveyed in wordless physical theatre of incredible nuance and precision.

It is mind-bogglingly ambitious and also presents huge practical challenges, most particularly choreographically in the management of bodies on stage, into and out of light. Technically it’s incredibly complex – the futuristic setting means that every action demands its own swoosh of technology, the effects mixed live by director (and co-artistic director of the company, who has also written the show) George Mann, within a sound track of sinister grandiosity (that would benefit from greater variation). The story unfolds with a sort of compelling inevitability as one man tries to beat the system his parents created: it’s classic sci-fi fare and the shape holds few surprises. What’s more of an issue though, is that some of its narrative action is unclear. The built in requirement of science fiction to establish the rules of its world mean that we are in unfamiliar territory: we flit in and out of characters’ minds, between real and virtual places, past and present. It’s complex storytelling and there are sequences, including, critically, the denouement, where I’m not sure exactly what the detailed mime is conveying.

Theatre Ad Infinitum have developed a narrative that makes sense of the language of light, but not so much the language of wordless physical theatre (the fact that key narrative developments have to be conveyed by surtitle illustrates the problem). This isn’t a comment on the quality of idea or its execution – physically, conceptually, Light offers much to enjoy and its form is highly original. It’s the sheer ambition of the idea that limits its achievement and this, if there must be one, is the best reason to fail.