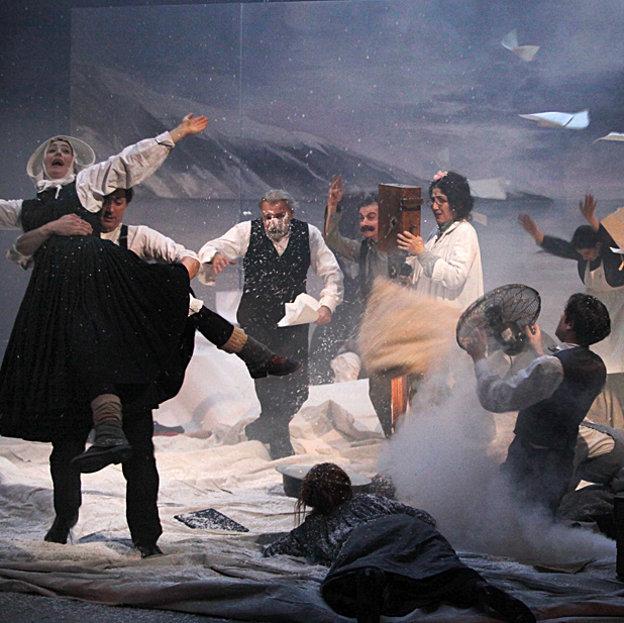 ‘It has taken 48 years for the Edinburgh International to bring us here,’ says Ariane Mnouchkine (founder-director of Theatre du Soleil, legend in her own lifetime) before the show, on this their last performance of a sold-out five-day run.

And we can see why: it’s a tall order, bringing this lot over the water. A cast of – how many? 35 or more? They can’t all fit across the breadth of this enormous stage to take their bow – and tons, and I mean tons, of kit (the great wall of wooden packing cases stamped with their name form a barrier between the bar area and auditorium in this great cavernous hangar of a space, close to Edinburgh Airport). All in the service of an epic show that is about an amateur theatre company, who are also cooks and waiters in a restaurant cum dancehall, making a film that is loosely based on a lost Jules Verne story of a voyage to the freezing South Atlantic in search of – well, quite what is hard to say. In search of the dawn of a new age as the world enters the twentieth century, in search of the noble savage of South America, in search of hidden treasure (gold, oil, minerals), in search of modernism, in search of Darwinism, in search of Marxism, in search of feminism, in search of an exposition of Queen Victoria’s brand of imperialism, in search of an explanation of the madness of waging war over lands that hardly seem worth fighting over (The Falklands, say), in search of the reasons for the assassination of Archduke Franz-Ferdinand and the beginning of the Great War, in search of… It’s exhausting just thinking about it, never mind watching it. The show is devised by the company and, as the programme notes put it, the script ‘half-written’ by leading feminist writer, philosopher and theoretician Hélène Cixous. (Warning! Could contain didactic and polemical tracts loosely disguised as theatre writing – and it does.)

I’d like to say it was worth all the effort, but sadly it didn’t rock my boat, and I felt a little exhausted by it all – despite admiring the evident theatre-making skill, despite knowing that I was watching a truly legendary company, despite the obvious enthusiasm of the audience, who rose to give them a standing ovation at the end of the four-hour marathon. Yep, four hours, sitting in uncomfortable metal seats, with one short interval.

So, how does it all play out? My favourite bit is the start. As we enter the auditorium, we pass along a corridor one ‘wall’ of which is a stretch of lace curtains, behind which we see a scene that is perhaps how we might imagine the backstage at the Chat Noir Parisian cabaret circa 1890. Ladies in white petticoats and bloomers pull on their stockings and boots; gentlemen with twirly moustaches paint their eyebrows and rouge their cheeks. There are some nice anachronistic reminders that this isn’t 1914 in the plastic bottles of water and modern brands of make-up remover. Past the ‘dressing rooms’, stage left is a room half-shielded by a wooden wall and half in full view, filled with a marvellous collection of musical instruments: stringed things of every size and type, drums, zithers, tubas, horns, full-size pianos and toy-pianos. A rotund man with a white bushy beard is standing guard over his treasure. (I presume him to be the company’s musical director Jean-Jacques Lemêtre, playing Monsieur Camille Berard the musician, but I might be wrong.)

All great so far! I suppose this start leads me to expect that this might be a promenade piece, but no – we are sat in our seats and there we must stay. The stage area is massive and – a nice touch – there are also lighting towers to each side that are climbed at regular intervals by characters designated as lighting operators for the ‘filming’. And so the story begins, the story of the making of the film, a film directed by Monsieur Tomasso (who plays many parts in his own film) with assistant director Madame Gabriel also taking on the role of camera-woman, making for some very nice swinging-around-in-a-harness opportunities. So yes, there are characters playing characters playing characters. There are clownish waiters who act as commentators on the action, also providing eccentric dance interludes, and there is – just to add another layer – a pre-recorded soundtrack in voiceover (in English, thankfully).

As each scene is shot, painted backdrops of Arctic wastes or Victorian drawing-rooms or cabins in the countryside are bussed onto the stage by bustling actors/waiters, carriages or chairs or mock-ups of the boat brought into play, snow or wind machines switched on and off, and Foley sound effects created for the ‘film’.

Poor theatre this is not. It might even be the ‘theatre of scene shifters’ that Jacques Copeau strove so hard to eliminate. I suppose the counterargument is that all this ‘stuff’ is being done with ironic intention, a kind of commentary on the complexity of this sort of creative endeavour.

It is of course all absolutely beautiful. There are some gorgeous tableaux – groups of actors poised at the helm of the Fol Espoir, or trekking across the Antarctic in ludicrous slow-mo, walking against the wind. There are some lovely little visual jokes that will appeal to contemporary theatre-makers: every scene shot contains at least one puppet bird on a rod, and the cry of ‘Ou est l’oiseau?’ is a constant refrain. The shipwreck scene with a miniature boat decorated with fairy lights floating in a tub is delightful, and brings a smile to my lips. The onstage musician is a genius – I happily watch him when I get bored of the inevitable cranking up of the snow machine, his tinkling on his piano and banging of his drums and gongs and bells, onstage or just out of sight, is constantly entertaining.

There are a lot of lovely things here, but four hours’ worth of material? I don’t think so. Perhaps if they had thought through the surtitle business, I might have enjoyed it more. This was an odd one: as what we were watching being created was a silent film, title-cards were used – except they weren’t. What we had instead were the surtitle screens also used for the title-card text, as well as both lots of text being projected onto the scenery and backdrops. The company seemed to feel that just changing the font was good enough to distinguish between the two forms of textual content, or maybe they thought it was an interesting postmodern provocation to mix the two up, but to my mind it was a dramaturgical boo-boo – totally confusing, and as I was in one of the front rows, to the side of and parallel with the main surtitle screen which I thus couldn’t see, I had to resign myself to trying to read white words often projected onto an off-white or pale-blue backdrop, mostly illegible. I gave up after a while and just watched the actors making nice moving pictures, but as the text was evidently supremely important, I feel a little bit cheated of one key element of the show.

It was great to have the opportunity to see such a legendary company, this being my first encounter with Théâtre du Soleil, who are rarely programmed in the UK despite their iconic status – but I get the feeling that I have perhaps missed the Mnouchkine boat.