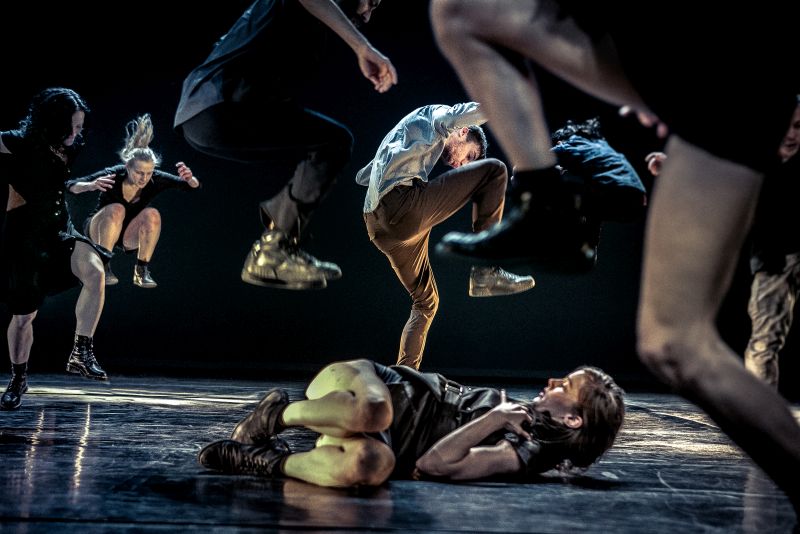 It is now 28 years since What the Body Does Not Remember first balled sinewy fists, put its head down and flung itself sweatily, knees and elbows first, at the sternum of dance audiences. The style it heralded, full of sound and fury, came to be called — sniffily – Eurocrash, and the rest… is history.

The work, Wim Vandekeybus’s début, a perennial teaching and workshop fixture of the company it inaugurated, and now revived for the third time in an epic international tour (ongoing since 2012) is, one senses, foundational more than simply career-wise. The work of a young man, it asks impertinently large, fundamental questions about its art form, and in reply proclaims its own manifesto with the uncouth certainty of youth.

Cognitive scientists distinguish procedural from declarative memory: the former backs learned ability — the how of experience; the latter traffics in the state of the world – the why. The title of the work is a provocation, but if we take it seriously, declares a systematic exclusion of (what it asserts to be) the customary stock of other theatrical dance: the ‘how’ – the technical, the drilled; and its replacement as world-motor by what is usually excluded – adventitious necessity, a real-time non-negotiable why. ‘Why move?’ the piece insistently nags. Because I’m off balance; because over there things will be better; because I want that jacket; because I need to keep this feather aloft; because that falling brick will hit her if I don’t. Because that’s the game.

Vandekeybus develops his theatrical argument through six chapters working through introduction, exposition (via experiments in response to a class of stimulus object) and conclusion:
1) A seated woman’s hands rasp, caress, tap, slap, thump an amplified tabletop. Two men sprawl and thrash across the floor, call and response, training us to hear the whinnies and fusillades of Thierry de May and Peter Vermeesch’s skronktrack not so much as conventional accompaniment as electrified goad.
2) Cinderblocks are laid as stepping stones and stacked into henges. Soon they become hurled projectiles, finally rubble and billowing dust.
3) Jackets are worn and exchanged; pocket-picking escalates to jacket theft. Towels replace them in vogue; they journey from costume to contested possession to discarded burden.
4) Problematically, the female cast becomes object: patting down gives way to aggressive touching up — a disturbing vignette, and greatly more so as their resistance melts. Acceptable in the Eighties perhaps, and best left there.
5) Chairs crystallise posed tableaux evoking burgeoning family groups; one character meanwhile struggles alone with his chair.
6) Territorial stamping, a reverse overture, a medley of recapitulations and reframings, vocabulary triumphantly decoded as tightly-meshed interlocking components. This is a theatre of elaborate pattern, naked of ornament; of striking situations without enduring images. Vandekeybus is little interested in finesse, more with silhouette, still more with dynamics, and most of all with architectural trajectories through space. It is as graphic and legible as motorway signage, and as exquisite.

I picture the choreographic process of What the Body Does Not Remember involving a squared exercise book, a rainbow of colour-coded felt tips, and very possibly — considering how deeply it scores diagonals through its bare stage space — a protractor. Vandekeybus elaborates his language by exhaustive exemplification, permutation, and combination like a grammarian tabulating declensions. The punctuating motif of the introduction, parallel pronated arms, recurs: forklifting towels, patted on thighs as invitation to sit on a lap; turning up cinderblocks; shunting towels across the floor; and in a dozen more rhymes and derivations. The work is a textbook of pattern making, an obsessive fugal compendium of four-dimensional tilings and tessellations. Vandekeybus favours transformations which are in the mathematical sense, affine, operations that conserve lines in parallel: he scales, rotates, skews, translates but he specifically avoids distortion.

His sense of pattern is permutative (like Lego) rather than incrementally evolving (like an M.C.Escher pattern in which a flock of birds become fish). In both spatial and temporal terms, he’s a profoundly Euclidean choreographer – it is a limited palette he’s allowing himself (or by which he is being limited), and this is a very different geometric understanding than that of, for example, a William Forsythe, who habitually wraps movement around intersecting curves, elliptic choreography perhaps, or the funhouse-mirror hyperbolic world of Wayne McGregor.

In strictly dramatic terms, every individual scene mansplains — labouring points already well established and enumerating redundant options: no chair arrives onstage unaccompanied by the premonition that it will tour all corners, visit all cardinal points, and do so in all orientations and rotations. Vandekeybus’s project is not about our holding our attention however — the risk and velocity and blare already compel that — his intent is language-smithing. The method is ingenious. By embedding continual, compulsive permutation everywhere (one dancer’s hair is by turns loose, ponytailed, top knotted and plaited; another wears shorts, skirt, trousers, knickers), he inscribes a clear terrain of possibility and occupies it completely, pleading thereby the generality, economy, and comprehensiveness of his language. This language-buttressing was, I submit, a factor in the viral momentum with which the style exhibited here colonised subsequent imaginations. No wonder, too, that the slower-witted copyists were bamboozled. For what really propels it is not devil-may-care abandon but fastidious analytical calculation.

What the body does not remember is that which it must spontaneously create — such, then, is the conceit. This is, finally, a lie. It is the humanising, idiosyncratic, personal texture and embodied experience with which each of the luminous, heroic, gorgeous nine-strong ensemble specifically inhabits the restless playground of the work which animates it. It is precisely body memory that acts in the hot moment, and not with the permission of a discreet momentary eye-contact before jumping, but in a headlong rush without looking first, in throwing the brick just a bit higher and sooner than expected. It is delight and dare-dealing and it is trust, boundary-pushing, and play. It’s not a bad working definition of love.

2015 swipes history’s panorama past Google-glazed eyes. Time present and time past are both eternally present in time YouTube, and the ramifications for repertoire and history in dance remain work in progress. What the Body Does Not Remember itself remembers a moment now unimaginably remote in time, a time before the body’s conversation with memory became technologised. Perhaps this is what makes it timely: or perhaps it is instructive that Vandekeybus himself nowadays seems more preoccupied with making work for the screen.