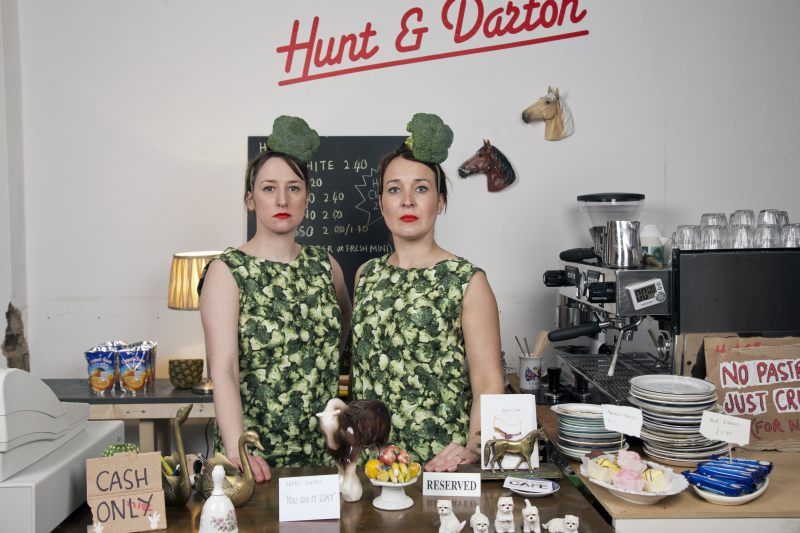 Burnished just so by the perfect twilight, Gateway House shimmers silver, like a bolt of bright fish shoaling towards the city. But this is Manchester and the rest of the time, which is all of the time, with only rain and tombstone sky to reflect, it’s a beached carcass rotting down to the ribs. The seedy huddle of shops fringing its belly are off-brand for today’s dynamic city-centre experience and are being excised. The Station Cafe was the first ploughed under by the fundamentalist gentrifiers. It opened all hours, nighthawked by a cast of hookers on fag break and crumpled greybeards. In its place now is a Little Waitrose. The Station Cafe is gone. I grieve.

Hunt & Darton Cafe is a working cafe, vending drinks and food in the setting of a free-form, rolling improvisational, live art cabaret. It’s been catnip for seemingly every festival promoter in the land, providing not only a daytime attraction, but packaging readymade solutions to awkward practicalities like refreshments and bathrooms and… showcasing local artists.

In addition to the drinks and food (excellent – dissonantly so in a work otherwise suspicious of conspicuous proficiency – but if you seek a critic ready to chide a show for its too-delicious cake, Reader, surf on, I am not he) a three-course set menu of short routines is available for performance table-side. A meal might comprise Delia Dance (teetering table aerobics), Laughs (an unnerving safari through the possibilities of performed laughter), and for dessert, Africa (a pastiche of African dance so cringe-provoking that I never see the ending, involuntarily averting my eyes every time). This is by no means virgin territory, but what Duckie dished up as fetishy divine decadence, Hunt and Darton serve like Les Dawson awarding a Blankety Blank chequebook and pen.

Live art à la mode circa 2015 is a trajectory relentlessly in pursuit of its own centre. As the form seeks shelter in the academy, fashion is mistaken for style, and style misunderstood as a found object. Ubiquitously, the monologue-to-microphone template of stand-up is recycled, comedy optional. This season, bad dancing is trending; bad karaoke is hot; (performed) performed awkwardness is To Die For. It’s over-reading Cafe to claim it as a critique of these à la carte tics, but the genius of the work is that it invents a pretext naturally to serve up a knowing banquet of tropes du jour without necessarily endorsing them: having your cake and, so to speak, selling it, for £3 a slice.

There are three strata to the scenography: anonymous retail unit; signage (Key Stage 1 calligraphy and an F for spelling) on blackboard and cardboard; ornamental chintz of the kind Oxfam shops now politely decline (on ‘Austerity’ theme day, the Staffordshire dogs and china Coldstream Guards are retired and centrepiece of each table is a single unpeeled potato). In sum, the decor and service evokes tea at your nan’s – fussed over but with a hint of disapproval stiffening the indulgence – that is, if your nan happens to be Carmen Miranda. Hunt and Darton, proprietors, model matching uniforms like the Honolulu chapter of Pussy Riot: sensible shoes; smock dresses in a Magic-Eye pineapple print; and, worn as a fascinator, the spiky topmost third of a fresh pineapple. Except on ‘Broccoli’ days, naturally.

A calendar of themes (‘Do it Yourself’, ‘Health and Safety’, ‘Social Media’), local performers as ‘guest waiters’ (from Eggs Collective as Robert Palmer girls pickled in WKD to Pigeon Theatre conducting experiments in olfaction), and a daily schedule (each day anticlimaxes at 18:30 with Unhappy Hour) are the flywheel that keeps the machine throbbing, but in practice, everything is geared to making space for spontaneous… not magic, but its precise inverse: abracadabra! ladies and gentlemen – the resolutely ordinary.

Hunt flourishes a gleaming salver heaped with Polos. ‘Mint, sir?’ she offers, appending the existential critique ‘They’re the one with the hole, I’m afraid.’

Guest waiters Eggs Collective are massaging us out of Unhappy Hour with a lairy tribute to Petula Clarke. ‘Wait wait wait!’ Sara (Cocker) is animated. ‘How about instead of Downtown we do it as… Hunt and Dar-ton?’ The spontaneous result is euphoric, oddly affecting and only improved by the car crash lack of consensus of on how practically to accommodate the first two syllables.

‘Welcome to the cafe – you look good in it. How’s your day been?’ I lament the presence in town of an EDL rally. ‘Well, what we do when somebody’s having a bad day is we get all the dogs in the cafe and…’ Hunt assembles a motley chorus of china dogs on the table facing me. The fixed stare of sixty glazed pupils is deeply troubling and I confess as much. Hunt nods understandingly, turns them around one by one so that we are all – the dogs and I – gazing together towards the dessert table. ‘Better now?’ And it is.

The last in particular is paradigmatic: Hunt and Darton’s is, par excellence, a theatre of inadequate solutions. The gap between reality and our weapons is the work’s defining motif, by turns comedic and heartbreaking.

Over the run, we meet many Dartons: Sue ‘Darton’ Hurst (brilliantly truculent, with a pout exactly locating the midpoint between the younger Bardot and the elder Steptoe), Rachel ‘Darton’ Porter (who can tell a story about wetting the bed like she’s Liza Minnelli regaling An Audience With…), Rachel ‘Darton’ Gammon (all the bathetic dying-swan fall of Tony Hancock, which is even more impressive given how drunk she is), and ‘Classic’ Holly Darton (an Enid Blyton heroine, brimming with pluck and school spirit). On the level of chemistry, the work is most dangerous with the latter. The body language rhymes, the double-dares spiral, the backchat crackles. As the duo re-create highlights from their back catalogue, a classic status negotiation unfolds, Darton fastidiously stooping from dignity, Hunt clambering up toward it.

‘Hunt,’ Darton says, ‘is hardcore.’ Impossible to disagree – and not just for her stamina, or the warmth and selflessness with which as facilitator she tilts both limelight and laughs to everyone else – Jenny Hunt’s performance persona, Hunt, is a tightrope walk in its own right. ‘This is from It’s a Shitter, the series of poems I’m working on: It’s a shitter / When you’re still paying for the wedding / And the marriage is over.’ Cafe habituées learn to flinch when Hunt splits a bottle with the muse, Euterpe. Like a sneeze, the pleasure is the fizzy shudder afterward, the uncurling of the toes. Like a sneeze, you might find your eyes watery. Wise and baffled, sad and complicated, fearless and pitilessly funny, it is a glorious omnishambles of a performance.

Cafe works because it reconciles the performed and the everyday by insisting on their inseparability: Customers arrive bringing wildly varying frames of reference but the artists commendably refuse to be drawn into operating in multiple levels at the same time. The joke isn’t on punters who aren’t in on the ‘art’ frame – because this isn’t a joke, but a humane collaboration with its audience. As a single serving, Cafe delights audiences of all stripes – families, tourists, every performer within a 50 mile radius, all the fauna of the city (two senior ladies clutching Coronation Street Tour carrier bags sit next to me one day, shaking with laughter, wiping tears from each other’s cheeks at Hunt’s most off-colour poetry) but over three weeks, for a growing audience who begin appearing every night, the work takes on a richer life as epic.

In A Certain Level of Denial, Karen Finley describes climbing a mountain to throw a handful of sequins into the wind, ‘a small thing that makes the world better’. Hunt & Darton Cafe is such a handful of sequins: windblown, twinkling and melancholy. If it is slight, it is so only because its central concern is the centrality of the slight.

The ongoing durational art/life slow-crash of Station Approach delivers a stunning coup-de-thêatre when, in Cafe‘s final week, the adjacent unit opens as… a cafe, and not a pop up, the permanent kind that will endure forever as long as man craves craft ale and pulled pork. They have Venetian blinds and twee decor, they have blackboard signage and so-bad-its-nearly-good music, but their customers clump in lonely ones and twos like a waiting room annexe. Nobody is wearing fruit, playing Blue Riband Jenga or serenading a neighbouring table with Wuthering Heights. Hunt & Darton Cafe is gone. I grieve.