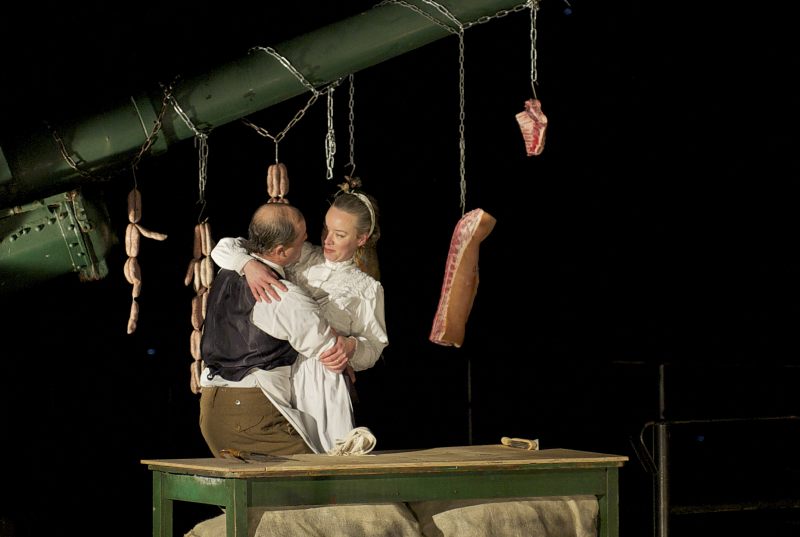 A co-production between (writer) Sarah Clifford’s Inroads Productions and Brighton-based outdoor-arts and spectacle specialists Zap Art, Home Fires is at heart a big community event, marshalling a considerable amount of local talent – including several dance groups – alongside a substantial professional creative team and cast, including musicians, installation art, and lots of slick video projection from Shared Space and Light. There’s clearly been substantial wraparound work and now there’s this ambitious promenade show taking us all around the mostly-outdoor space of the Napoleonic Newhaven Fort, telling stories – fictionalised but apparently drawn from local reminiscence work – of the First World War.

So it’s a big, rich evening, and it definitely feels like an event. Everyone is working hard, and having a good time, and despite the bitter cold (unfortunate, but hardly unheard of in March) the audience mainly are too. As a show, it is at its best when it reaches for spectacle to match this scale: the dancing scenes that tell us so much without words; moments of visual brio that use the scale of the location, or its unusual corners, or are genuinely surprising. Soldiers singing from the ramparts, figures caught in distant lights, a final desperate dance with a side of beef. It never really becomes more than the sum of its very many parts though – lots of the elements feel placed together rather than essentially interdependent. And the writing at the core is a weak link: aside from one strand of the narrative that doesn’t get enough time or focus – the rebellious soldiers billeted just outside the town – it’s a very familiar and predictable story, told with blunt-instrument unsubtlety in oddly naturalistic (given the formal context) scenes that don’t quite feel worth standing in the cold for.

But somehow that’s not really the point, or not entirely: despite the flaws the evening does manage to be about us, as an audience and as a community, about being here together, about remembering together. And that’s at least a little bit warming.